Backed into a corner in must-win desperation tends to be when the U.S. national team responds with its best performance in recent memory.

Facing the possibility of being the first team eliminated from the 2016 Copa America Centenario with a defeat to Costa Rica on Tuesday, Jurgen Klinsmann’s USMNT responded with its first victory over a top-25-ranked team since 2009 (Spain, at the Confederations Cup). 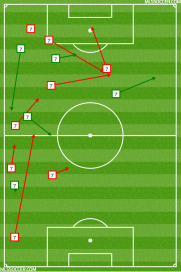 Here’s two things about Bobby Wood: he’s the best natural striker currently on the USMNT roster (or in the entire player pool, for that matter); he’s also a truly dreadful winger. Yet, for nearly a game and a half of this Copa America, Jurgen Klinsmann elected to deploy the newly-signed Hamburg man as left winger. In the photo at right, you’ll get a sense of how that went on Tuesday (spoiler: not well).

Then, somewhere around the 40th minute, Wood shifted inside with Clint Dempsey, who doesn’t fit any role in a front-three very well these days, taking up a wider role. A couple minutes later, Dempsey found Wood inside the penalty area, and the Hawaiian-born 23-year-old showed us what a real no. 9 does with his back to goal.

Of course, to play Wood centrally would require switching to a 4-4-2 for the remainder of the tournament — with Fabian Johnson pushing up to midfield and Edgar Castillo starting at left back (no thanks!), so not a great option — or dropping Dempsey to the bench and starting 17-year-old Christian Pulisic, which seems unlikely happen even after coming out for the second half as such.

Time to ride the Brooks-Cameron partnership

John Brooks had a disastrous summer of 2015 as he struggled game after game at the CONCACAF Gold Cup. What we forgot, though: Brooks was 22 years old at the time and still had (has) a long way to go in his development as a player. Perhaps — and call me crazy for this — allowing Brooks to play (and struggle) all of last summer aided in Brooks’ breakout 2015-16 season for Hertha Berlin and the USMNT.

Also, perhaps Brooks’ struggles were exacerbated by those of his partner for the majority of those Gold Cup games, Ventura Alvarado. Playing alongside Geoff Cameron, an established Premier League starter in his own right, Brooks looks a totally different, supremely confident player. It wouldn’t be outlandish to say that Brooks might be the USMNT’s best player right now.

More than anything, and simplest of all, Brooks and Cameron have now played the last 270 minutes together. The last time two center backs played three straight games together for the USMNT was … well, it’s been a while.

For the most part, the lineup that Klinsmann trotted out against Colombia on Friday was the right lineup — above Wood/Dempsey/Gyasi Zardes points excepted. Maybe you’ve heard, but they lost 2-0 on Friday and looked disturbingly impotent in doing so, so of course folks were perturbed when Klinsmann named an unchanged lineup Tuesday against Costa Rica.

As I said when the lineup was announced, it was the right lineup for this game. With the Ticos playing a five-man back line, the USMNT was always going to have all the time in the world in the middle third of the field, which is where Colombia pressed them (and turned them over) to death. Unsurprisingly, Michael Bradley and Jermaine Jones had hugely improved, influential games against Costa Rica, and the latter bagged an impressive goal to make it 2-0 not long before halftime.

Cool as you like! Jermaine Jones doubles the #USMNT's lead over Costa Rica. #USAvCRC #MyCopaColors https://t.co/H6YTWaEMJf

While yes, results are the ultimate gauge of success in sports, the process by which you arrive at said results still matter greatly, and in this instance, Klinsmann nailed it by naming the same starting 11 in back-to-back games for the first time since June 2014.