The New York Cosmos put their slump behind them just in time to retake the top spot in the table with a 3-0 win over Puerto Rico on Saturday.

It wasn’t easy for New York, as has been the case for much of the last few weeks, but a solid showing from Lucky Mkosana helped them through. It was the 28-year-old’s cross on the break that saw Puerto Rico defender Cristiano Dias put it into his own net to open the scoring in the 16th minute. Much of the game was a slog, but Mkosana assisted Juan Arango’s headed effort to put the game away in the 84th minute, and the Zimbabwean grabbed a deserved goal in added time to solidify the scoreline.

The win for the Cosmos was their 10th win at home for the 2016 season (spring and fall table combined), a new NASL record, helping them back atop the fall table after a three-game winless run. They finished second in the spring season to Indy on head-to-head record despite being level on points, goal differential, and goals scored.

Elsewhere, the Cosmos were allowed back atop the table after Rayo OKC and Minnesota United both dropped points with the two playing to a 2-2 draw in Yukon, Oklahoma. A scoreless first half exploded in the second 45, with both teams holding a lead at some point. The visitors thought they had a winner in the 92nd minute as Christian Ramirez seemed to have decided it, but Rayo defender Futty Danso replied just a minute later with his second goal of the game to settle things evenly.

Miami FC pulled itself out the table’s bottom third with a 2-1 home win over Indy Eleven. Ariel Martinez scored the eventual winner in the 85th minute on a long, cross-field feed from Blake Smith and a smart long-range finish. 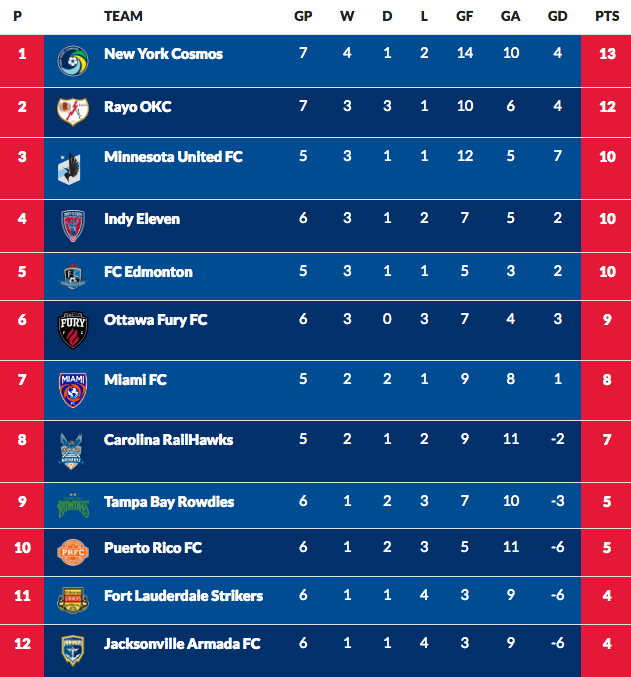