Moments after your initial reaction to reports that Landon Donovan is returning to Major League Soccer with the LA Galaxy, you likely asked one question…

That’s a very legitimate query and after the initial euphoria around this impending announcement, it is a question which will take some explaining from Donovan who is 35 next March and played his final game 19 months ago for LA.

[ MORE: Donovan is coming back ]

Another question you likely had is: “can he do this?” and the answer is of course, yes. Donovan is technically a free agent and even though the MLS transfer window is closed, clubs can still sign free agents.

However, the main reason this is likely happening is not because Donovan is yearning to get back on the pitch to score one last goal and win one last trophy. Oh no. This is more about LA and their push for another MLS Cup.

The Galaxy is currently ravaged by injuries with young U.S. international forward Gyasi Zardes out for the rest of the season, 36-year-old Robbie Keane struggling consistently with injuries, Jelle Van Damme also out and so is Steven Gerrard who is failing to make a big impact in MLS. If Donovan does return, as we all now expect, he will play. LA need him to.

LA has six games left this season and there’s no doubt Bruce Arena will use Donovan as much as he can for goals, assists and above all, experience. The Galaxy are currently in third-place in the Western Conference, seven points off leaders FC Dallas. That’s not disastrous but with injuries piling up, having Donovan around for the playoff push isn’t a bad idea and their remaining games in the regular season see them travel to playoff rivals Sporting KC and two games against Supporters’ Shield leaders FC Dallas.

When you break it down like that it’s not too surprising to imagine Arena giving LD a call and saying “hey, do you fancy a run out for a few games to help us get over the line?” Plus, when it comes to finances it is difficult to see there being an issue in paying Donovan for a few games under the salary cap structure of MLS, or in him actually asking for much in payment at all.

Let’s also not forget that when Donovan retired in 2014 he had 19 assists and scored 10 goals in MLS and was in fine form. With Kaka, Frank Lampard, Didier Drogba and others still going strong in MLS, why can’t Donovan roll back the years too? 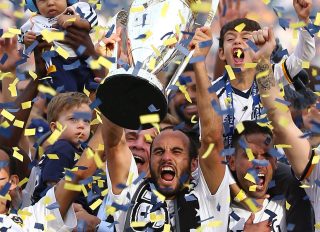 When Donovan hoisted MLS Cup with LA on Dec 7, 2014, that was the last we all thought we’d see of him on a soccer pitch as a professional player. Turns out that might not be the case and although many will laud his decision to put the cleats back on, it is mind-boggling to work out why he is doing this.

Commercially it will be a great success for LA Galaxy and MLS. Donovan sells shirts and he is box office. This comeback will reverberate around the soccer world and so many more fans will tune in to LA’s final six games of the season to see Donovan in action once again. There are even calls for Donovan to be recalled for the U.S. national team but given his outspoken criticism of Jurgen Klinsmann since he retired, plus the way he was treated by being left out of the 2014 World Cup roster, it seems very unlikely. After today though, who knows anymore…

There is, however, a sense that this has come out of absolutely nowhere. Less than a month ago, Aug. 9 to be exact, I spoke with Donovan and he raved about life after soccer and spoke about his plans to visit the UK this weekend as he has become a minority owner in Premier League side Swansea City. They’ve a huge game against Chelsea and Donovan was planning on being there. Turns out he will be at a stadium this Sunday but he could be back on the pitch instead, playing for LA against Orlando City SC.

As unlikely as this return has always seemed, someone who knows Donovan well told me “I wouldn’t be surprised” when the news first broke about his return.

Despite his tales of being happy in retirement with his newborn son and getting into coaching with the MLS Homegrown teams, plus broadcasting ventures with FOX, those around him likely knew Donovan would like to have one last crack before it was too late.

However you slice it up or try to make sense of it, this is a comeback nobody saw coming and one of the most stunning in U.S. sports history.

A LegenD is about to return to the pitch.