Bob Bradley took his first day of training at Swansea City on Wednesday and although the vast majority of his squad are on international duty with their respective nations, the former USMNT coach will be itching to get to work to improve the Swans’ fortunes.

Bradley, 58, has inherited a talented squad of players but molding them into his style and getting results is, of course, the hard part.

Knowing Bradley’s meticulous eye for detail and his penchant for mountains of prep work, he’ll likely already know who will play and how they will play in his first game in charge at Arsenal on Oct. 15 (Watch live, 10 a.m. ET online via NBC Sports).

When Bradley has a fully fit squad to choose from, how will Swansea look?

On paper, this XI looks good enough to at least stay in the Premier League. When you factor in that Leon Britton, Wayne Routledge, Ki, Modou Barrow, Angel Rangel and Nathan Dyer are also in the squad, Bradley has plenty of experienced players to choose from.

Swansea haven’t won since the opening day of the season, a late 1-0 win at Burnley, but in recent games against Chelsea, Man City and Liverpool they’ve shown considerable guile and togetherness despite picking up just four points from their opening seven games.
Against Chelsea they went ahead 2-1 in the second half after falling behind and they pressed high to great success, forcing Chelsea’s defense into mistakes. They did that against Liverpool too who they led 1-0 at half time last weekend before sitting back and inviting pressure in the second half. 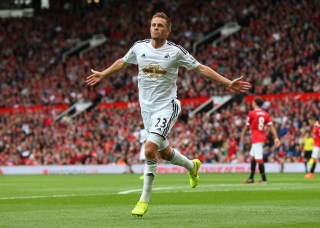 If Bradley can add defensive solidity to this high-pressing Swans unit then he’ll undoubtedly have success. How he will do that is by going with two holding midfielders in front of the back four, who he will encourage to dovetail and join the attack when necessary. Keeping wide players high will be key and just like he did with Jozy Altidore with the U.S. national team and at Stabaek where he had Fredrik Brustad or Adama Diomande, it would make sense to deploy a target forward with high wingers feeding off him.

Fernando Llorente, a vastly experienced striker, could be that man for the Swans with Borja Baston, Gylfi Sigurdsson and Jefferson Montero combining underneath him.

When it comes to Swansea’s philosophy of playing attractive, possession-based soccer, Bradley is more than capable of building his defensive structure around that. When you speak to players who’ve been coached by him, one of the first things they praise is his defensive organization. Against the big boys this season Swansea will no doubt have to bunker in and defend smartly to grind out points but they have enough attacking talent to hurt teams on the counter or by getting the ball to Llorente and using the pace of Borja, Montero and others off of him.

The number one priority for Bradley is to get his best players out on the pitch and then playing to their strengths. Over the years his tactical flexibility has been clear and Bradley will once again have to quickly decipher what’s best for his team in a new league with a new set of players. He’s flourished in these kind of situations in the past but the ruthlessness of the Premier League will not give him any time to ease into this. Bradley knows this. His entire career has been building to the next few months, and years, with the Swans as he looks to steady the ship in South Wales.