On hiring Arena: “I don’t view it as Bruce 2, but Bruce 2.0. He has far more experience than he had the first go-round. He’s proven and re-proven himself.”

On Arena’s timeline: “We have an agreement through the World Cup with various contingencies as all contracts have.”

On foreign-born players: “If you’re eligible, you are available for selection. We are open to anyone, whether they are born abroad or born here.”

What did Klinsmann do well? “The commentary with seriousness of how players approach the game and their craft… The shorter term issues like new players, whether Christian, Bobby Wood, or Jordan Morris, those are obvious ones. Another important one is off the field, the awareness to the program, the attention to the program. Jurgen, by virtue of who he was elevated the program around the world. He came into a program that had a very solid foundation in my view. … In his own way, he’s built on that and Bruce will continue that process.”

On the technical director position: “We’re not in a rush.”

On the Arena hiring timeline: “Bruce and I talk pretty regularly. We’re friends, we work in the sport, and he’s coached our national team. That’s not just the case with Bruce. The discussions about coaching the team started in the last 48 hours. We met with Bruce yesterday in the afternoon, and concluded an agreement about 2 hours ago.”

Where did you think the USMNT would be by now? “The easiest metric is wins and losses. In an ideal world, 2-0. 0-2 put us in a very difficult position. We’d like to see the team playing at the Confederations Cup next summer. We would’ve liked to see the Olympic team in Brazil. If I could pick three things, those would be things.”

On Arena beyond 2018, and how there’s nothing contractual beyond it: “We both have options to talk to each other after the World Cup.”

On his hiring: “I’m thrilled to be back with the national team. It’s the greatest honor for a coach in our country. We have a great challenge ahead but we have a great pool of players to reach out goal of qualifying for Russia in 2018.”

Where has the team gone in last decade (since he was let go in 2006)? “That’s not an easy question to ask. US Soccer has made great progress with the growth of the league and our players playing abroad. Winning World Cups is difficult as we know, but I think the United States is edging closer to that day. I have a lot of confidence in our domestic pool and players playing in Europe and Mexico. Since I left in 2006, the pool of players has certainly expanded.” 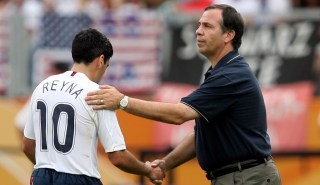 On his comments about foreign-born players: “I don’t know how that came about. I guess we did that interview three years ago. If I made those comments, I certainly don’t believe that that’s my attitude… I’m all for any players that are eligible to play for us. I look forward to, using your term, our foreign nationals in addition to our (domestic players).”

On his priorities: “The most important thing right now is I’m very familiar with the pool of players, but to have as many conversations with as many players by January camp, and touch base with our entire pool of players by March. … We’ll develop an identity over the next couple months, and hopefully feel comfortable working with each other.”

On hiring assistants and calling up players: “We’re gonna take a week or two to think this out and select the strongest staff that we can have. I don’t think the roster is going to have radical changes from the last couple of camps but there will obviously be some changes.”

On his plans, and the Costa Rica loss: “I would’ve done this for free. The game in Costa Rica was certainly disappointing. Hopefully it’s one that allows us to step back and evaluate what went wrong for the team, and get us prepared for how to play on the road in CONCACAF. The only thing I’m going to tell you is we’re going to make it better.”

On how he’s grown since he last held the USMNT job: “I’ve had 10 years on the field at the club level. I’ve had the opportunity to work with some of the most talented players in the world, and understanding how they work. Continue to grow on the tactical side. … Ten years later I’m better prepared for this job than I was in 1998, 2002, and ultimately 2006. … One of the things you learn from experience is you see things a lot clearer, a lot quicker.”

“How would I describe myself as a coach? A hard worker. I like to believe I’m a players coach. What I really know is how to build a team, and I understand all the qualities and circumstances that go into how to make a team.”

On players like Jonathan Bornstein and Benny Feilhaber: “They and others are good players. We’re going to give those kind of players the opportunity to back in the national team program. I’m well aware of the quality of those two and others. It’s highly unlikely we’re going to bring many new players into the program.”

On who he’s spoken to thusfar: “I haven’t spoken to Michael Bradley but I have had communication with a couple of players over the last 10 hours or so. We need to build a chemistry with this team and build a common goal, work on a team concept. We have good players. We just gotta get them working together as a team.”

On his intended style: “A difficult question. Your style is dictated by the qualities of your players. We are who we are. The American quality is teams that have been harder to play against. If you saw the European Championships last summer, the Copa America, the U.S. isn’t far behind. We’re traditionally strong in the goal. We have some young attacking talent, and we have some experienced players in the midfield.”