MANCHESTER, England — Geoff Cameron was missing for the U.S. national team in their opening 2018 World Cup qualifiers against Mexico and Costa Rica back in November.

The USMNT lost both after shaky defensive displays and a lot has changed since the last time he suited up for the Stars and Stripes.

Jurgen Klinsmann was fired and Bruce Arena has come in and now all the focus for the U.S. is on the next two World Cup qualifiers against Honduras this Friday in San Jose, Calif. and then next Tuesday against Panama in Panama City.

Speaking exclusively to Pro Soccer Talk from his home in Manchester, England before he flew out to link up with the national team — in-between Cameron was named as Stoke’s man of the match in their narrow 2-1 defeat to Premier League leaders Chelsea on Saturday — Cameron knows all of the pressure is on the USMNT in the next seven days with the U.S. sitting bottom of the Hex.

“I think the pressure is on us. It is a must win situation,” Cameron said. “Going down to Panama, it’s a tough place to play. The environment, everything is against us when we go down there. They are good players. They are savvy and they have technical ability, good on and off the ball. They are creative, quick on the ball and fast and they are slick in certain ways. They have an understanding on how to take advantage of certain situations.

“We need to be more aware of that and have an understanding of that going into these games because we know it’s going to be difficult at home with Honduras coming in and they’re going to try and make it difficult for us to play the game how we want to play. Also going down to Panama, we know it’s going to be tough to play down there. We might have to sit back and defend a little bit, weather the storm and then hit them on the counter. We have to be strategically aware of all these situations teams are going to be throwing at us.”


Cameron, 31, missed four months through injury this season after injuring his MCL in an innocuous challenge at the end of Stoke’s victory at Hull City back in October, 2016.

After playing the full 90 minutes in central midfield in each of Stoke’s last three Premier League games, the versatile defender/midfielder is now back fit and ready to lead the U.S. defense after watching on helplessly as the team succumbed to defeats to Mexico and Costa Rica back.

The nature of those defeats ultimately cost Klinsmann his job.

“It was so frustrating to watch because as a team we didn’t play well and as individuals and as a team we weren’t up to par,” Cameron said, grimacing. “Sitting down and watching the game, it was so frustrating because I knew I was a player who could help and being that player that I thought they needed whether it be a physical attribute or the mental attitude or that toughness and bite we seemed to be missing in those two games. It was difficult. Obviously you have those ups and downs in your career and that was kind of the down point. I’m excited to get back and happy I’m fit now.

“We have two massive qualifiers we need to take care of business. We are in a bit of a tough spot right now. In the qualifying we always seem to have these ups and downs and that’s part of it. We know these two games here are key with Honduras at home and Panama away, we know we need to get six points, minimum four. That’s our goal.”

That will be a tough goal to achieve, especially with Bobby Wood, Fabian Johnson and DeAndre Yedlin all out of the squad through injury as Arena will have to shuffle his defense for two crucial games.

Cameron could well line up at right back with Yedlin and Johnson out. Wherever he plays, he’s confident he can help the USMNT achieve their goal of getting their World Cup qualifying campaign back on track.

“This is like the number one question I’m asked,” Cameron laughs as we discuss his best position. “I will continue to say I feel like my best position is either center half or defensive central midfield. Those are the positions I’ve thrived in when I’ve played there in the Premier League for Stoke. I can play right back, no problem, and I’ve got a bunch of games under my belt and I’ve proved to myself that I can play in a number of positions. I don’t think that a lot of players who can play these positions at a high level and do it as consistently or well as I can, especially going from one position to another and being able to change and understand the roles.

“I still say my best strengths are either for defensive center mid or center half. I love playing center half and partnering up with Brooksy [John Brooks] in Copa America, our back four were solid and we just had a really good partnership and understanding. Also, this season and throughout my career I’ve found myself playing in defensive midfield and sitting in the hole to protect the back four. I know I can do that and I’ve shown that I can do that with Stoke City, especially playing against some of the best players in the world. I’m confident in my ability and I can play in those positions but like I said all along, it is whatever position the coach needs me in and I am willing to play and help out the team. It’s not about me. It’s about the team and putting the team first and doing whatever I can to help the team be successful.” 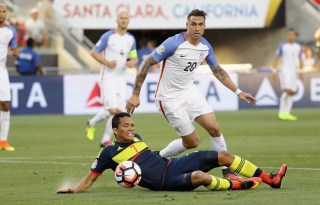 There are now plenty of players back in the fold who have tasted success in qualifying and at tournaments with the U.S. over the last decade.

With Cameron back fit, plus Clint Dempsey and Tim Howard also returning to full fitness, Arena will have plenty of experience to call on for these key qualifiers.

“My first experience when I was first coming through, when we were in a tough spot, we would look to guys like Steve Cherundolo and Carlos Bocanegra,” Cameron explained. “Those were guys you looked up to, captains and experienced guys who had been through the ups and downs of qualifiers. Going through all this before, I have that experience of ‘these are the moments where everybody needs to step up.’

“In the beginning of qualifying this time around, when we needed to beat Guatemala at home and it was a must-win game, everybody showed up together and we got the result and made it to the next round. It is one of those moments where everybody needs to be on the same page and working for one another. I think the veterans, the guys who are experienced, myself, [Alejandro] Bedoya, Tim [Howard], Jermaine [Jones] and all of these guys who have experience of going through the qualifiers, knowing what to expect and what we need to do.”

Cameron was around the USMNT’s January camp for a few days as he received treatment on his MCL injury and said he felt a “positive vibe” from the players on the training ground, with Arena and his staff giving fresh chances to players to impress and competition for places high.

That said, whoever is the manager of the U.S. Cameron knows the buck still stops with the players.

“Overall, it just comes down to us. We, as players, need to perform better than we did in the last couple of qualifiers,” Cameron said. “We need to bring that team chemistry and get that team atmosphere back. It seems that the fighting mentality was what we missed in the last few games because I didn’t see it when we were playing. We need to get that back.” 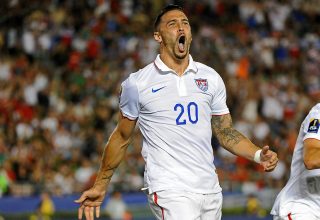 If Cameron plays against either Honduras or Panama in the next seven days, he will hit 50 caps for the U.S. national team.

48 of his caps have come in the past five years, showcasing his importance to the team over the Klinsmann era.

What will it mean for him to reach 50 caps in these upcoming qualifiers?

“It has always been a dream of mine, to play and represent my country. It’s a special thing. I don’t think people really understand it until they are actually put into the position where they are able to represent their country,” Cameron said, smiling. “You are representing your country, your national team, people that have fought for you and died for you to give you a chance to represent the United States, playing soccer. It is pretty special. Not everyone gets this opportunity and that’s why you never know when it’s going to be your last.

“Thinking back to when we played Cuba [in a friendly last October in Havana], it’s like ‘am I going to be out for another year with injury?’ I was so happy and excited that it would possibly be an opportunity to get my 50th cap against Mexico in the World Cup qualifier and I could’ve already been on 50 caps had it not been for certain games missed through injury or suspensions, then we wouldn’t be talking about it. It is definitely special. It honestly is a proud moment but every game is as special because you never know when it will be your last. That’s why you always try to take in the moment and when you put your hand on your heart and you are representing and putting on that national team jersey, you are representing everybody in your country. We are all American. We come together and we play for our country. That’s special in itself.”