Each year a small group of young American soccer players get the chance of a lifetime: to train and play games at Tottenham Hotspur for a week.

Pro Soccer Talk was given exclusive access on the most recent trip to England for a group of 30 young American players handpicked by Tottenham’s academy coaches after impressing at the latest Tottenham Hotspur America Trophy held in December 2016.

For the past five years the tournament has been a huge success with the competition, run in conjunction with Elite Tournaments who are based in the USA, producing incredible experiences for young players from the U.S. from the age of 12-15 which has even resulted in national team recognition for some.

Over the Easter break at Spurs’ impressive training ground near Enfield in north London you could hear American accents taking over with “dang” and “shoot the ball” yelled out by young hopefuls who trained for a week with Tottenham’s coaches and played games against academy teams from Spurs and Queens Park Rangers.

How does this all work?

Four of Spurs academy coaches go over to watch the tournament in December and then handpick individuals to come over to England for the training camp.

Matt Libber, the Vice President of Elite Tournaments, was stood on the sideline keeping a watchful eye over training as he and his staff have now helped organize this tournament, among many others, for the past five years. 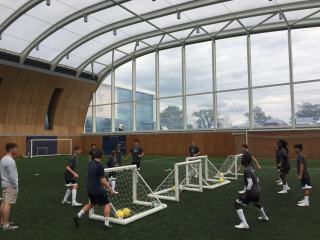 Elite Tournaments have been around since March 2000 and now have 60 events across the USA, mostly focusing on soccer, and new events are popping up across the nation. “It’s widespread. People want to play soccer,” Libber explained.

Such has been the popularity of this event (93 teams from multiple U.S. states and Canada competed in the tournament back in December) it is being expanded to new parts of the USA in 2017 and beyond and you can find out more info about that here.

“We are expanding the tournament this year,” Libber said. “Previously it was just one event in Baltimore but we are moving it to two events for the next edition. We are going to be down in the College Station, Texas area and then in Orlando, Florida this coming December and we are hoping to expand the event further, to bring more kids over here and to increase the exposure of the event and for Spurs in the States.”

The connection with Spurs and the U.S. runs truer than perhaps any other Premier League club.

Of course, Fulham’s days of “Fulhamerica” are still fond in the memory of many American soccer fans but after boasting Kasey Keller, Clint Dempsey, Brad Friedel, DeAndre Yedlin and now Cameron Carter-Vickers, Tottenham continue be one the first teams that American soccer fans think about supporting when they get into watching the Premier League. 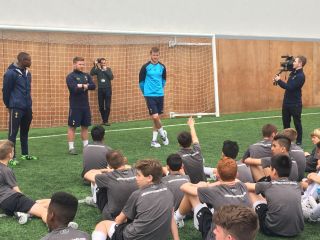 Eric Dier, a star midfielder for Tottenham and England, told us of his amazement at the huge number of Spurs fans in the States as he often visits his sister who lives in New York City.

He and his family are blown away by the level of support across the country.

“Every time I go over to America I can’t believe how many Tottenham fans there are over there,” Dier said. “It is amazing that our reach is so far. Obviously there’s a connection because Tottenham have always had great American players and I think there is a real connection with the American fans.”

Spurs are heading to the USA this summer with games against AS Roma in New York City, Manchester City in Nashville and Paris Saint-Germain in Orlando lined up for July. Dier and his teammates are looking forward to their first trip Stateside for two years.

“Everyone is really excited to go over there and we last went there two preseasons ago with the All-Star Game in Colorado which was a great experience. We are looking forward to working hard, playing some big games and enjoying the chance to see our fanbase in America,” Dier added.

What do the kids who go on these trips get out of it?

Speaking to Danny Mitchell, a member of Tottenham’s global coaching program who spent the week with the youngsters from the U.S., he revealed that on the pitch there’s a real challenge for the young Americans.

“The one thing a lot of these kids have always said is that it is a challenge physically, in the nature of the way the game is played,” Mitchell said. “This week there has been a lot of technical stuff which I’m not sure they’ve necessarily done a lot of before but they’ve all engaged well and have responded well to what we have done.”

Split into two age groups and playing on Spurs’ main indoor facility as the club logo loomed large in the background, one group played head tennis and another a possession game designed to trigger a high-press. As well as on the pitch the group went on stadium tours of White Hart Lane, Wembley, had a Q&A with Dier and watched other games live in stadiums as part of the full experience.

With some kids picking up the lingo in England rather quickly with choice phrases (think, Ted Lasso’s nickname…) commonplace, it was obvious that even though they didn’t play on the same teams back home and hailed from Pennsylvania, Ohio, Virginia and Connecticut among other States, the young Americans were having the time of their lives.

Over the past five years the main takeaway for young players getting the chance to play and train at Spurs is the level of coaching and competition during the scrimmages in England.

“It is eye-opening for the kids, seeing the training style in the U.S. is so different to what it is here,” Libber explained. “For them it opens their eyes to see there is a bigger option out there and also the competition they’re playing against over here. Some years we’ve done really well and other years not so great. It gives them an opportunity to see what other teams are like when they’re not playing against the same teams they play every game in the States.”

Libber (he and his staff racked up over 1000 miles in their rental car while in England as they traveled to games at Lincoln, Sunderland and beyond) also explained that players who caught the eye on previous trips have now gone on to big things.

“Most definitely. A couple of years ago when we were over here, we had a couple of kids who Brad Friedel recognized the talent they had and they ended up in the national team pool after that when they got back to the States,” Libber said. “One is now the goalkeeper for the U-17 national team (Quantrell Jones) and another is in college right now (Keegan Kelly at the University of Maryland) after being in the national pool. They got noticed when they were over here.” 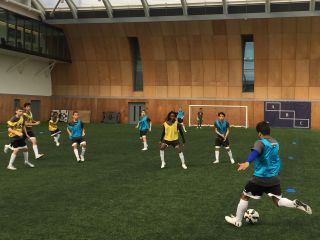 Liam Nesbitt, a 14-year-old central midfielder from Baltimore, Maryland, is hoping to be the next in line to benefit from this tournament.

Reflecting on his trip to Tottenham, Nesbitt revealed what he’s learned from the experience.

“It’s been great. I was told this is the best academy in terms of learning the game in England and I don’t doubt it now because it is so nice,” Nesbitt said. “It has been a lot of fun and the coaching has been great. I support Tottenham and this has been like a dream come true. My favorite player is N'Golo Kante though and that’s who I try to base my game off of. I’ve picked up a few new turns to do and these coaches have taught me what drills to do in order to master those moves.”

Patrick Aponowicz was the youngest player on the trip from the U.S. and the 10-year-old was also a Spurs fan who idolized Kyle Walker.

With his flowing locks of blonde hair Aponowicz had been quickly handed the nickname of “Nedved” after the famous Czech Republic winger who shone for Juventus and his country.

“I learned new touches and passing,” Aponowicz said. “It’s been a lot of fun.”

Come On You Spurs

Like a lot of 10 year olds Aponowicz has a busy schedule and says he wishes he could watch even more soccer as he dreams of one day playing in the Premier League for Tottenham.

“I have school, playing for my soccer team four days a week and homework,” Aponowicz said. “My dream is to play for Tottenham and I want to come back here and train.”

Aponowicz isn’t the only young American dreaming of one day returning to England to play for Spurs after a taste of life at Tottenham.

“Definitely… definitely. That’s the dream,” Nesbitt said, nodding his head as his eyes gazed around in wonderment at the vast indoor facility at Tottenham.

The American connection continues to be stronger at Tottenham than at perhaps any other Premier League club.