The 34th and final round of action in the 2016-17 Bundesliga season took place on Saturday and there was plenty of drama at the top and bottom of the table.

Elsewhere there was plenty of chopping and changing for the remaining European places as Borussia Dortmund won a thriller 4-3 to stay in third place and qualify automatically for the UEFA Champions League, while Bayern Munich finished off their title-winning campaign in style.

Below is the final wrap of the Bundesliga season.

Hamburg have never been relegated from the Bundesliga and they will keep that proud record intact. Hamburg’s hero was Luca Waldschmidt who turned 21 yesterday and he jumped off the bench late on to head home and secure Hamburg’s spot in Germany’s top flight for next season. Filip Kosti had made it 1-1 in a nerve-jangling but the hosts scored late and their goalkeeper made a string of fine saves to pull off a remarkable final day win.

As for Wolfsburg, who had taken an early lead through Robin Knocke, the have a two-legged playoff on Thursday May 25 and May 29 as they aim to keep their place in the Bundesliga.

Philipp Lahm and Xabi Alonso went out with a win as the German champions (that’s now five titles on the spin) beat Freiburg thanks to goals from Arjen Robben and Arturo Vidal which put them 2-0 up, but Freiburg pulled a goal back to make it interesting. Ribery and Kimmich added goals in stoppage time to put some extra gloss on the scoreline.

Bayern also lifted the German title at the Allianz Arena after the full time whistle as Lahm and Alonso head into retirement with one final win under their belt. For Freiburg, they could still qualify for the Europa League if Dortmund beat Frankfurt in the German Cup final next weekend.

An absolute humdinger of a game as Dortmund scored a later winner via an Aubameyang penalty kick as Thomas Tuchel’s men secured third place and an automatic spot in the UCL group stage. Dortmund trailed 3-2 heading into the final 15 minutes but two late penalty kicks, the first from Marco Reus, turned the game around. Aubameyang also won the Bundesliga’s Golden Boot with 31 goals for the season. 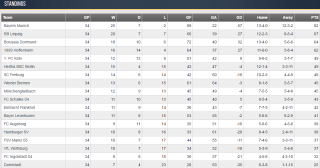