It has all gone quiet at Southampton. But for how long?

Media speculation has been rampant over the past few weeks that Claude Puel, Southampton’s first-year manager, would be shown the exit door at St Mary’s this summer amid fan unrest about the style of play and their regression from a team challenging for the top six.

But, even in these times where fans demand instant success and patience is severely lacking, is that really the right answer?

Puel, 55, delivered an eighth place finish, the fourth-straight season Southampton have finished eighth or higher, which is the first time they’ve achieved that feat in club history.

Yet many supporters point to the fact that Southampton finished just five points above Swansea City who finished in 15th place, plus they complain about Puel’s dull demeanor in his press conference as he struggles to express himself in English. He is a figure which truly divides the fanbase between those wanting him fired and those wiling to give him another chance.

Saints are a club who finished in a higher league position in seven-straight seasons before this campaign, so perhaps the vast majority of the fanbase have become too accustomed to overachieving and this reality check was always on the horizon.

A top 10 finish and a cup run should always be a superb season for a club of Southampton’s size, but fans want more. With talk of a potential Chinese takeover this summer, they want to dream that they can push for a top six finish and qualify for Europe each season and aren’t sure Puel is the right man to deliver it.

That’s fair enough, but when you dissect the entire season and the key stats which came from it, getting rid of Puel seems incredibly hasty.

He had many unfortunate obstacles to overcome in his first season in England and it’s unlikely he’ll have so much to deal with next season, and possibly beyond.

Club captain Jose Fonte was sold midway through the campaign after a disagreement with directors over his future, while leading scorer Charlie Austin (yes, he was out since December but still finished top scorer, with nine) was injured for five months and star center back Virgil Van Dijk was also injured in January as it ended his season. Along with all of this Puel had to deal with Saints’ first-ever Europa League group stage campaign and the agony of missing out on the knockout stages by one goal. 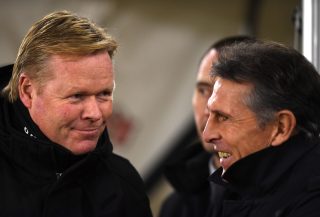 The constant chopping and changing of the team dominated Puel’s reign in the early months as he made 97 lineup changes throughout the season. Only Manchester City and Manchester United made more in the PL in 2016-17.

Perhaps one of the major criticisms was that he tinkered too much to try and keep his squad fresh as they pushed to qualify for the Europa League knockout stage, with the previous high-tempo style of play impossible to replicate across a 53-game season.

Hence the slower pace of play which frustrated many fans and perhaps failed to get the best out of a team built by Mauricio Pochettino and Ronald Koeman to play a fast, high-pressing style, which in turn led to reports of many senior players unhappy at the tactics deployed by the Frenchman.

Another big factor of the rotation was reaching the EFL Cup final where Saints, again, agonizingly came up short as they lost 3-2 to Manchester United at Wembley in a game which they should have won.

In the Premier League his team scored just 17 goals in 19 home games with no goals in any of their final five home games of the season which led to fans booing and plenty calling for Puel to be fired. But if you look a little deeper, the chances are being created but with Austin out, Manolo Gabbiadini‘s hot streak over after his initial burst and the duo of Shane Long and Jay Rodriguez failing to step up, Saints’ shot conversion rate was the lowest in the PL.

That’s right, Southampton converted just 7.47 percent of the 549 shots that had at goal, which was the seventh-highest number of shot attempts in the PL. Saints created chances but could Puel really do much about his players not converting them? It sounds simplistic, but think about it. With Austin back fit next season, plus Gabbiadini and Sofiane Boufal acclimatized to life in England, will this shot conversion rate really be this low again?

Saints also had two players in the PL’s top 18 in terms of chances created, Dusan Tadic and Nathan Redmond, and away from home they had the seventh best record but had the 17th best record at home, suggesting their prowess as a counter-attacking team. Had Saints scored penalty kicks against Hull City and Manchester United in two of their final three home games then they would have finished more comfortably in eighth place and had a much better home record.

Southampton also had the second youngest starting XI in the PL at 26 years and 169 days, with Redmond and James Ward-Prowse making their full England debuts, plus no PL club had more than Saints’ seven players in the full and U-21 England teams when they were announced at the end of the season.

As well as English talent like Sam McQueen, Ward-Prowse, Redmond and Jack Stephens improving drastically, Puel helped the likes of Oriol Romeu, Maya Yoshida and Cedric Soares reach new heights too. It shouldn’t be all doom and gloom and Puel is a man who can deliver steady progression at a club which lost its past two managers, Pochettino and Koeman, to bigger teams in the PL just when it appeared they were on the verge of great things at St Mary’s.

Another reason to keep the faith, for at least another season, is the fact that wherever Puel has been he has delivered improved results beyond his first season. There’s a hope he can do that at Southampton, especially without the extra rigors of European action next season.

He took charge of AS Monaco in January 1999 and they won the French title in May 2000. He took charge of Lille in 2002 and improved them from 14th to 10th to 2nd place finishes in his first three seasons at the club. Puel spent six seasons at Lille and helped the likes of Eden Hazard and Yohan Cabaye break into the team.

In 2008 he took charge of Lyon and in his second full season he took the French outfit to the UEFA Champions League semifinal for just the first time in club history, plus Hugo Lloris and others broke through under his guidance. In 2012 he took charge of Nice and in his first season he led them to fourth in Ligue 1 (their highest Ligue 1 finish since 1976), then did it once again in 2015-16 with 17th and 11th place finishes in-between. The Nice team he left behind last season just finished third in Ligue 1.

All of this proves that Puel can improve teams, if he’s given time.

What is Saints’ alternative to Puel? Some reports suggest Marco Silva would be the main man but he appears to be joining Watford after impressing at Hull City, while the names of Slavisa Jokanovic and Alan Pardew have also been mentioned as potential replacements.

Do Southampton really want to become a club know for hiring and firing managers after a season which presented plenty of challenges but still ended up with a top half finish, a decent run in Europe and a EFL Cup final appearance?

If Saints put faith in Puel, he may just surprise everyone. Of course, like every manager, he needs a bit of luck to drop his way but fans calling for his head should think clearly about what the alternative would be.