This is a lot of cash.

On Thursday the Premier League revealed how much each team received in 2016-17 from broadcast revenue, an equal share of central income and a merit payment depending on their final finish in the league table.

Chelsea sit on top as the 2016-17 PL champs received $194.4 million, while Sunderland still received $120.4 million despite finishing bottom of the Premier League standings.

As well as these “payments to clubs” each season, the Premier League also pointed out the huge role it plays on developing and growing the game at all levels in the UK.

Along with our Clubs we provide a range of support for the development of football outside the Premier League, including solidarity payments for all EFL and National League clubs, and the funding of player pensions and welfare and medical insurance costs for all EFL players.

The League and its Clubs fund community facilities across England and Wales, operate national and local sports participation projects, and have recently launched Premier League Primary Stars – a program that will help to inspire primary school children in everything from maths and English to teamwork and sport.

Here’s the full breakdown of how much each Premier League club received in 2016-17. 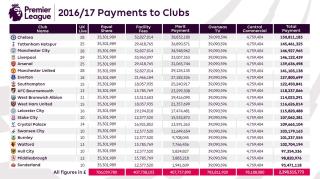