Jake Edwards sees the growth of the United Soccer League. He’s impressed, but far from sated.

The 41-year-old league president sounds more like a man focused on quality than quantity these days, though there’s little denying the USL’s rise beyond 30 teams is impressive.

In the battle to lay claim to markets, Edwards can’t help but note the strength of those markets as more important. Anyone can place a team in a city, or invite a group into a league, but fostering clubs that will endure? That’s a worthwhile target.

Edwards spoke with PST about that and more this week.

PST: Jake, let’s start with an outstanding week in the Lamar Hunt U.S. Open Cup. The USL has made no pretense about aiming to succeed in the tournament, so how did it feel to watch so many of your clubs win?

Jake Edwards: “It was a good week. We have nine clubs that have progressed to the fourth round. The U.S. Open Cup remains a very important part of the season calendar for our clubs. The last two non-MLS clubs to win the competition were the Rhinos and the Richmond Kickers, and Battery have been in the finals.

“The new clubs that have come into our league over the last year or two want to make their names and have a good run. It remains a vital part of this landscape. I sit on the committee, and the committee members and I discuss how to expand the awareness, perception, and value of this competition and there are some things that are being kicked around.”

PST: Surely there’s only so much you can say about those plans, but can you give us an idea of what you’d like to improve about the tournament?

Edwards: “One of the big things we need to address is the broadcast of the games and the exposure it gets. We have some at the very later stages of the competition, but we need to work that out in the earlier rounds. We had some challenges with the platform the federation used to showcase the games. We need to bring these games to a much wider audience.

“Another thing is we need to make sure we are playing those games in the right stadiums. The reward for a lower division team is to play a high division team in a big stadium. Perhaps they wouldn’t get that opportunity normally.”

PST: Let’s talk about USL3, the third division project you plan to launch in two summers. Your league hasn’t been shy about the project, sharing meetings on social media, and letting regions know what you’re doing in their town and when you’re there.

Edwards: “It’s important that we have people at the league office who are going across the countries, meeting with cities, with mayors, with investment groups in a number of communities we’ve identified and a number who’ve invited us there.  We’ve been working on this for the last 18 months, and we intend to launch the league in 2019. We’ll start to make announcements as we progress toward the fall this year. As a league and a group of clubs in the USL, we’ve strived hard to represent the game in the right way. I think people have seen that, and they believe they can also have a club in those communities that will be well supported. There’s no need to that behind closed doors.”

PST: Growth is important, I get that, but the benefits of growing in numbers are navigating the massive obstacle which is playing on such a gigantic continent.

Edwards: “I played in the UK for many years and you’re never that far from another club. It’s a much smaller country heavily populated with football clubs, but the major focus of our expansion push is to recognize the size and scale of North America and to understand as much as we are the world’s game, we have some inherent challenges and major ones are the landscape, the weather, and other sports that might drown you out.

“We’ve focused on the regionality and building those derb.y games. It’s been great to see this past year the amount of fans who can travel and support their teams away from home. We’ve seen that in Louisville, Cincinnati, and St. Louis, and between Pittsburgh and Harrisburg, even Sacramento and L.A. that’s not that close. There are lots of markets at D-2 and D-3 level that can reduce our travel and costs.

“We’re working towards a three conference model and getting there within the next season or two to see the benefits of that regionality.” 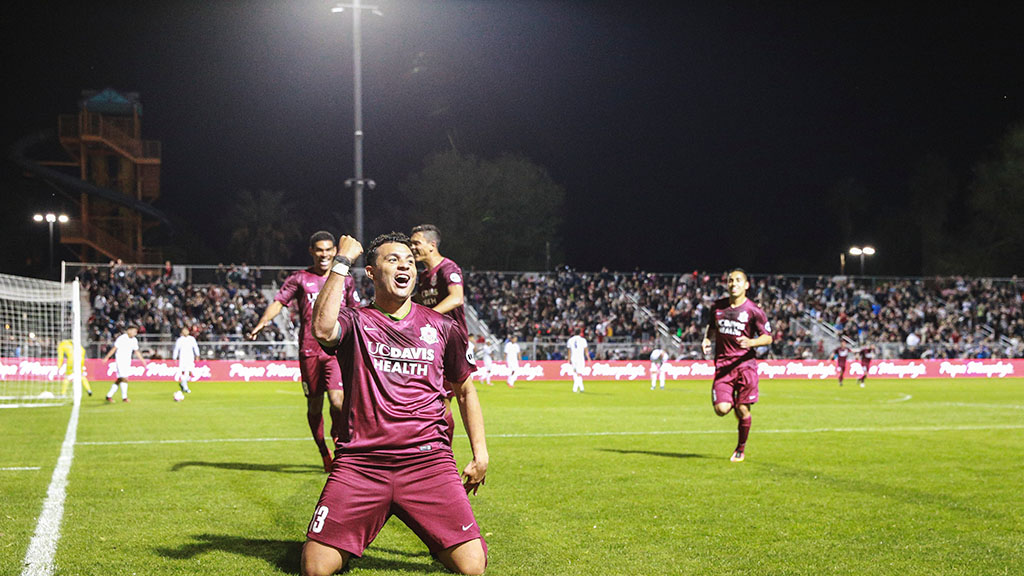 PST: What’s the thing that isn’t being noted enough about USL, in your opinion? When you read an article, what leaps out as ‘Why aren’t they talking about this?’

Edwards: “The explosion of attendance and support that our clubs are getting in these communities. We’ve worked hard at the league levels to work with our clubs to engage the fan base, but what we’re seeing now is an engaged local ownership group at each of clubs who are making the requisite investment into those clubs. We’re seeing that pay dividends. We’re averaging about 6,000 fans a game, with a 30 percent increase in attendance, sponsorship, and engagement in our communities. We’ve had 1.5 million through our gates last year, and are on track to pass two million this year.

“Long may it continue, and I think it will with the new crop of team coming into our leagues in the next few years.”

PST: Obviously being with NBC we’re major fans of the Premier League. What’s your take on your hometown club?

Edwards: “I was born in Manchester, and I’ve always been on the red side of the city. I’m glad to see them back on track and into the Champions League next year. I was a lifelong supporter of the club. I used to go watch them in the 1980s when there were terraces. They were not as good as Liverpool in those days.

“I played against them a couple of times back in my playing days which was a big thrill for me. It’s nice to see them back where they belong. It’s funny enough when I was at Exeter City we played them in the FA Cup at Old Trafford, we drew 0-0 in 2005-06. (NBC Sports broadcasting wizard) Rebecca Lowe on NBC Sports, who does a great job, her husband Paul Buckle who’s now a head coach at Sacramento, he was my teammate at Exeter.”