After 90 minutes of hair-on-fire soccer at Estadio Azteca, the U.S. national team has just its third competitive point at Mexico’s national stadium. The lessons from Sunday’s clash in Mexico City are infinite, but for now, let’s look at three key elements of Bruce Arena’s gameplan, and give the USMNT boss some deserved (and vindicating) praise.

It’s good to have a plan

Bruce Arena on tonight's #USMNT formation: "We told the team on day one of this camp that we would play that way in this game."

Arena went on to say they were “positioned to get three points today,” and he couldn’t be more right (Mexican coaches and players should be saying the same thing, but the game was that close). The last time the Yanks visited Azteca in World Cup qualifying, that wasn’t so much the case.

The rest of the stats from that last WCQ in Azteca, if you can stomach them… pic.twitter.com/3NrAALrqLW

1. Three center backs — It was effectively five across the back for much of the night, and it created a numerical balance that rarely allowed the USMNT to be overloaded in its defensive third. Working on something in training, and refining it in a friendly, before calling upon it in a meaningful game is covered on the first day of Management 101. Not everyone attends the first day of class, though, and that’s understandable.

2. Midfield partnership — It’s impossible to say what Arena would have done if Jermaine Jones had been healthy. The temptation certainly would have been there to roster him and call on the “old head who’s been here before” for a game like this. What’s not difficult to say is this: “Plain and simple, Kellyn Acosta makes Michael Bradley better.” Bradley’s only able to aggressively step up and win the ball high in midfield, as he did just before scoring his goal, if he knows Acosta’s behind him and disciplined enough to fill the space vacated if Bradley is unsuccessful. Let’s have a quick look at Acosta’s positioning when Bradley makes his move… 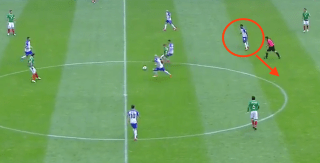 Not to oversimplify everything asked of a central midfielder, especially in a midfield-two, but Acosta, at the age of 21, already shows the kind of discipline that has never been a particular strength of Jones. (Sidenote: that’s totally fine, and in no way a knock on Jones. It’s only ever actually been a problem because he was shoehorned into a horribly ill-fitting role his entire USMNT career.)

3. Personnel to fit the counter-attacking approach — Under the previous coach, the USMNT set out to defend deep and hit teams (especially better sides) on the counter with frustrating regularity (considering the possession-based, attacking soccer that was promised in August 2011). Sometimes they were successful, but mostly it just frustrated (USMNT fans, not opponents).

And, why was it so? Let’s consider the personnel which has gobbled up the majority of starts in the final third over the last half-decade: Clint Dempsey and Jozy Altidore are each fine players in a system that plays to their strengths, but attacking open space is just about the last thing the two of them do well.

By swapping Altidore for Bobby Wood, and Dempsey for Paul Arriola, Arena put a bit of pace on the field — players who are comfortable (and effective) running at defenders in the field. For the 79 minutes Wood was on the field, Mexican defenders were aware of him running in behind weighed heavily, and kept them honest. Against a forward like Altidore, they’re able to creep further and further forward, shrink the field and recycle possession in the middle third again and again.

Arena even played a pair of central midfielders who thrive at playing long balls to runners in space. In theory, and an environment slightly different than Azteca, Bradley and Acosta feed those quick wingers and let them stretch their legs to devastating effect with a forward who can keep up, make smart runs inside the box and finish his chances.

For the first time in a long time, the building blocks appear to be in place, and genuine progression from one game to the next is clear as day. I’m encouraged and hopeful in a way that I’d long since forgotten.