It’s easy to have a knee-jerk reaction from a stellar point away at Mexico in 2018 World Cup qualifying, but this is so much more than that.

Fans of the U.S. men’s national team will be waking up with a renewed sense of hope on Monday morning as they watched their team implement a solid gameplan almost to perfection in the 1-1 draw at the Estadio Azteca.

Sure, Mexico was missing several key players, had one eye on the upcoming Confederations Cup and already has more than one foot in the 2018 World Cup in Russia, but it also shuffled its pack marvelously, and bravely, to come away from Mexico City with a valuable point.

U.S. Soccer got plenty of stick for firing Jurgen Klinsmann back in November 2016 after two defeats to open World Cup qualifying and then going for a blast from the past in Bruce Arena to guide them to the 2018 World Cup in Russia.

Despite all the critics (in truth, hiring Arena always seemed like the only real option) this is all working remarkably well and much quicker than expected.

"I caught it nice." 👈 understatement of the year.

Arena, 65, used all of his experience to navigate two World Cup qualifiers in four days at altitude and the length to which he went to make sure this happened smoothly is remarkable.

Players revealed after the game that Arena planned this out three weeks ago when they first met up ahead of the qualifiers. He had two separate teams training in different formations in order to get at least four points from the two qualifiers.

Arena himself, as he tends to do, kept things simple when speaking after the 1-1 draw at the Estadio Azteca, just the third time the U.S. had got something from their travels to Mexico City in World Cup qualifying.

Arena may have made it sound simple, but it was far from that.

Many threw their hands up in the air when Arena was appointed, stating that the USMNT had gone backwards. But was the past really that bad? After all, Arena had led the U.S. to the World Cup quarterfinals in 2002. We all know what happened in 2006 but this current U.S. squad was better than any other.

This is not so much about Arena’s superior game management as it is about Klinsmann’s tactical ineptitude. On a big-picture level Klinsmann did plenty of good for U.S. Soccer as a Technical Director. You can already see that with the youth national teams in recent months and the likes of Christian Pulisic, DeAndre Yedlin and John Brooks becoming regulars for the U.S. national team.

But what Klinsmann always lacked is what Arena is great at: organization for individual games and man-management.

USMNT center back Omar Gonzalez spoke of the difference between Klinsmann and Arena following the draw on Sunday night. He revealed that he and others knew for weeks that they would be playing in a three-man central defense, rather than at the last minute under Klinsmann for the home qualifier against Mexico in Columbus back in November.

“I was relieved that I knew that early, for sure,” Gonzalez told Goal.com. “I’ve had three weeks to prepare for this game. It’s just a different environment, and a different mentality you can take when you know three weeks out when you’re going to play, how you’re going to prepare. Sometimes with Jurgen you wouldn’t know until the day of the game. It’s just stressful, so with Bruce here taking that kind of approach here, it’s been helping out a lot…

“Bruce is very open, clear with players, straightforward. I like that approach and it’s been great so far. We’ve turned things around since November. Now we’re in third place (in CONCACAF World Cup qualifying) and I couldn’t be happier.”

Now, we will always be reminded of Klinsmann taking the German national team to the semifinals of the 2006 World Cup on home soil but he had Joachim Low alongside him. In the nicest way possible Klinsmann was a figurehead, a cheerleader who galvanized the players and staff, but now we all know Low was responsible for the key tactical decisions and he has shown that in the past 11 years in charge of Germany.

Klinsmann helped set up the system for the young German players to thrive in which the likes of Toni Kroos, Sami Khedira, Mesut Ozil and Thomas Muller soon benefited from. And you could argue the U.S. needed Klinsmann to put a similar rubric in place. You can also argue that having him in charge of the USMNT never really worked and he failed to get the best out of the most talented pool of players the U.S. has ever had. 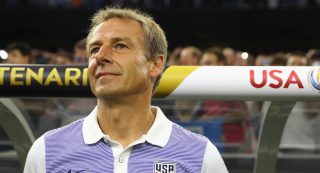 Just over six months in, Arena is already doing that. Eight points from four World Cup qualifiers points to that, but the main positive is that Arena has the backing of this squad and everyone believes in what he’s doing. He is old school and is keeping it simple.

Of course, there was a certain staleness towards the end of the Klinsmann era. That’s inevitable after six years at the helm and there is usually a short-term boost when a new manager comes in. Arena’s second-coming as U.S. boss feels like he is the right man at the right time.

Looking back at Klinsmann’s reign one final time, there were major ups and downs throughout and he could never get to grips with the ever-changing American soccer landscape. Arena is an old hand at handling that. Under Klinsmann friendly wins against Italy, Germany and Holland, plus the Copa America Centenario run and reaching the Round of 16 at the 2014 World Cup were scattered among a Gold Cup debacle and humiliating defeats to CONCACAF rivals.

It was probably in doubt before the past week, but now it is clear U.S. Soccer pulled the plug on Klinsmann at the right time.

They could’ve done it sooner but they were all-in on Klinsmann and only inept defeats which showcased a lack of detailed preparation could be the signal for his increasingly inevitable departure. That arrived in November and U.S. Soccer acted swiftly to appoint Arena. He may too have struggled against Mexico and Costa Rica last fall, but what we we have seen across Arena’s seven unbeaten games is exactly why Sunil Gulati and Co. made the change.

The Brooklyn native is brash and bold and not everyone’s cup of tea, but my word he’s getting the job done, once again, for the U.S.

With four qualifiers to go there is still plenty of work to do but after the home game against Costa Rica on Sept. 1 and then the trip to Honduras four days later the U.S. will have a strong idea if they’re going to qualify for the 2018 World Cup automatically.

Arena’s job will be complete if that is the case and anything next summer in Russia is a bonus. That’s a good mindset to have as the USMNT looked rejuvenated and refocused under an experienced coach who is surely the best the U.S. has ever produced.