On Wednesday the 2017 Confederations Cup will continue is Russia as two Group A games take center stage.

Let’s take a look at both games.

The hosts beat New Zealand 2-0 in the tournament opener with Fyodor Smolov the star of the show in Saint Petersburg, but this will be a totally different proposition for the hosts against Cristiano Ronaldo and Co. If Russia win, they’re in the semifinals.

Portugal let in a late equalizer against Mexico but looked capable of creating plenty of chances throughout with Nani, Quaresma and Andre Silva all able to unlock defenses. This will be a great indicator as to just how good this Russia side are ahead of the World Cup on home soil next summer. Portugal should win rather easily, but we all know playing the hosts is never easy. 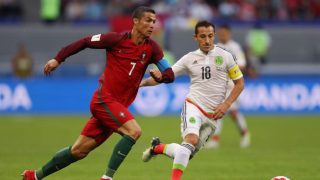 This is a must-win game for both teams as Mexico will not want to rely on beating hosts Russia in their final group game to make the semifinals. New Zealand are the undoubted minnows of this tournament and El Tri will be buoyed by snatching a point late on against Portugal on Sunday thanks to Hector Moreno.

The All Whites have had to travel 1,435 miles following their game against Russia in Saint Petersburg on Saturday, but they have had an extra day of rest. Young manager Anthony Hudson will once again look to Chris Wood to finish off any half-chances as New Zealand will try to frustrate Mexico and hit them on the break and from set pieces. Sound familiar, U.S. fans? If New Zealand lose they’re out of the tournament.