The next time the U.S. national team takes the field, they’ll face Panama in each side’s 2017 Gold Cup opener. Bruce Arena’s “B-team” completed its preparations with a 2-1 friendly victory over Ghana on Saturday. Here’s what we learned…

The time for Kellyn Acosta to assume the role of full-time central midfield star is… well, about three months ago. At the age of 21, Acosta’s ascendancy to arguably the best two-way player in the entire USMNT player pool is complete. 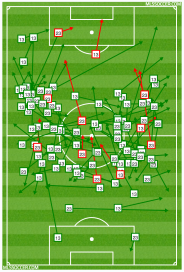 His showing for all season long for FC Dallas have shown he’s a class above MLS and ready for the next level; last month’s showing against Mexico, in Estadio Azteca, proved Acosta is mature well beyond his years, as the FCD homegrown star partnered Michael Bradley and played his part in the 1-1 draw; Saturday’s showing against Ghana proved he’s comfortable and confident no matter his midfield partner, as Acosta and Dax McCarty patrolled the middle of the park and dictated the game’s tempo for all 90 minutes (their combined passing chart, at right).

Acosta is the USMNT’s midfield star of the future (think: the next 10-12 years), and he looks more than ready to assume that title and responsibility in the here and now. His range of passing is second to none in the player pool; he’s a threat on goal from anywhere inside 30 yards; and he’s increasingly aware of tracking and handing off runners at all three levels. He’ll almost certainly be off to Europe next summer, should he show even remotely well at the 2018 World Cup in Russia, and USMNT fans should be downright giddy to witness the heights he’ll reach in the years immediately thereafter.

Matt Besler and Matt Hedges were very good in this one, just as Geoff Cameron and John Brooks were against Trinidad and Tobago last month, just as Cameron and Omar Gonzalez were against Mexico three days later. Less than 12 months to the World Cup, Arena now has five center backs, with varying amounts of international experience, upon whom he can call in just about any situation, no matter the opponent.

Four of the five, excluding Gonzalez, have the ability to play the ball out of the back that Jurgen Klinsmann desired for so long, but could never unlock to construct a team that effectively plays the ball out of the back. Now, under Arena, and with a functional two-way midfield in front of them every time they take the field, the likes of Cameron and Besler, ball-playing specialists on either side of central defense, are thriving in possession and in defense.

The Gold Cup’s going to be fun

Hot take: The “B-team” Gold Cup (meaning, the one to which the USMNT and Mexico don’t send their first team) is better than the “A-team” version, at least form a USMNT perspective. With so many up-and-comers making their way into the player pool from MLS academies/teams, the storylines and points of intrigue are countless.

From Acosta and Dwyer scoring their first international goals on Saturday; to Dax McCarty’s return to the USMNT fold; to Kelyn Rowe, Paul Arriola and Joe Corona’s bid to become “this World Cup cycle’s Graham Zusi”; to the ongoing search for a starting left back; three or four players should emerge from this month’s tournament and force Arena’s hand when 2018 World Cup qualifying resumes in September. From there, a World Cup debut is eight short months away.