There are five players who have been involved with the full U.S. national team who will feature in the 2017-18 Premier League season.

In a World Cup year we will all be keeping a very close eye on them.

Below we look at what lies ahead for each player and their club in the upcoming campaign as they aim to keep impressing Bruce Arena ahead of Russia 2018 (fingers crossed).

The U.S. national team’s starting center back signed a new contract at Stoke City at the end of last season and is heading into his sixth campaign as a regular for the Potters. Each season he is inching closer to Clint Dempsey‘s record as the outfield American player with the most appearances in PL history. Cameron, 32, will likely start in central midfield for Stoke this season after a string of man of the match performances at the end of last season when he returned from a long-term knee injury. It’s a big year for the Massachusetts native who will be in the USMNT’s starting lineup at the World Cup in Russia next summer as long as he’s fit and, of course, the U.S. qualify. Composed on the ball and strong in the air and the tackle, Cameron adds a calming influence to Stoke’s midfield and his versatility (right back, center back or center mid) means he is a hugely valuable asset to Mark Hughes‘ side.

Yedlin, 24, will start the season on the sidelines after picking up a hamstring injury in a preseason friendly. The former Seattle Sounders star made 32 appearances and scored once for Newcastle in their title-winning season in England’s second-tier in 2016-17 and he’s now ready to return to the PL after having a taste whilst on loan at Sunderland in 2015-16. He may not be Rafael Benitez’s first-choice right back after the summer arrival of Javier Manquillo but Yedlin’s versatility mean he can be deployed as a winger, wing back or full back down the right. Once he’s fully-fit expect him to make plenty of appearances for the Magpies this season. His surging forward runs are dangerous and he needs a big season under his belt in a World Cup year.

A huge season for Williams, 28, at Reading last season saw him clinch a move to newly-promoted Huddersfield. With his Reading side losing to Huddersfield on penalty kicks in the playoff final at Wembley, Williams put in a superb all-action display in midfield and obviously impressed fellow German-American David Wagner enough for the Huddersfield boss to give him a contract. Williams was a free transfer (bargain alert!) and he will compete straight away for a starting spot for the Terriers. A relegation battle likely awaits but Williams will be hoping he will get regular minutes in the PL to impress Bruce Arena and work into his plans for the USMNT. With stunning goals against Brazil and the Netherlands for the U.S. he has shown what he can do in the past but hasn’t appeared for the Stars and Stripes since 2016. Williams has experience of playing in the Bundesliga but is yet to appear in the Premier League. After four years giving his all with Reading to try and gain promotion he has finally achieved his dream, but with Huddersfield. 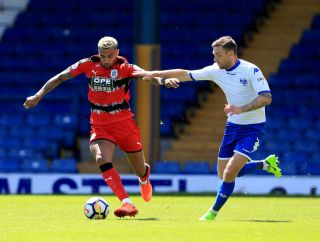 The former Fulham midfielder and U.S. U-20 captain spent last season on loan at Glasgow Rangers and excelled but an untimely injury during preseason means he has started life back at parent club Bournemouth with plenty of work to do. Hyndman, 21, is now at a crossroads in his career. He is contracted to Bournemouth for another three seasons but unless he breaks into Eddie Howe‘s squad consistently this season then he will likely be loaned elsewhere again. Jack Wilshere won’t be at Bournemouth this season so another midfield slot has opened up, but can Hyndman displace veterans Harry Arter, Andrew Surman and Dan Gosling, plus youngster Lewis Cook, for one of the central midfield roles? It will be a big ask for the Dallas native but his composure on the ball and ability to time his runs into the box will impress Howe.

It is hard to believe Carter-Vickers is still just 19 years old. He’s been around Spurs’ first team squad for the past two seasons and Mauricio Pochettino is known to be a huge fan of the U.S. national team youngster. Although he hasn’t made his full debut for the USMNT, Jurgen Klinsmann called him up to the squad after he impressed for the U.S. U-20’s. CCV has played in plenty of games for Spurs during preseason and continues to be given plenty of chances to develop with the English national team keeping a close eye on him with the defender born and raised in Essex to an American father. The young center back has Jan Vertonghen, Eric Dier and Toby Alderweireld ahead of him in the pecking order at Spurs, but with Kevin Wimmer likely on the way out he will remain with Spurs’ first team this season. Any defensive injuries could see him make his PL debut after appearing in cup competitions last season.