BRIGHTON — They’re here and they believe it’s where they belong.

For nearly two centuries Brighton has been known as a popular seaside town for vacations. But for at least the next nine months it will be known as the newest destination for the Premier League.

On Saturday Brighton & Hove Albion celebrated their first PL game in club history and for locals of the city on England’s south coast it was tough to sum up how far they’ve come after being on the brink of extinction in 1997.

“The actual day and the atmosphere has been absolutely fantastic. It is absolutely huge for Brighton. I’ve lived here a long, long time and to be here, in the stadium, it is hard to put it into words,” said Brighton fan Ross Perrett with a smile on his face. “It is where we should be. Let’s just hope we can stay up. I’m sure we can.”

Brighton held their own in their first game in England’s top-flight since 1983. They were dominated by Manchester City, the favorites for the PL title this season, and succumbed to a Sergio Aguero strike after a small defensive mistake and an own goal. Life is tough at the top.

The Seagulls’ dream to become an established PL side is still a long way away from bring realized but with a savvy manager in Chris Hughton, plus being backed by owner Tony Bloom who made their impressive American Express Community Stadium dream real, they have everything necessary to emulate the likes of Southampton, Swansea City and Bournemouth before them.

On a sun-soaked day down by the English Channel, most of the 30,000 fans in the stadium thought back to the last time Brighton were promoted to the top-flight of English soccer in 1979 where they remained for just four years.

“It has been amazing, I go back to when we last got promoted,” lifelong Brighton fan Derrick George said. “It is different now with social media and everything else. It is massive compared to what is was then, but the one thing that isn’t different is the culture shock when you see the quality of the opposition.”

Man City provided Brighton with a rude awakening to life in the top-flight but there are plenty of signs they can beat the drop in their debut season. Hughton’s men were organized and resolute in the first half and went close twice in the second half through goalmouth scrambles after set pieces.

Despite the defeat, the day was one to cherish as manager Hughton pointed to afterwards.

“I thought they [the fans] were exceptional but they have been in my time here, but I think today was very much a club day,” Hughton said. “This club has a history and a very difficult history in recent years. There are an awful lot of supporters here who weren’t able to come a good few years ago because of where this club was playing. It was very much a club day but that’s then, now it’s about making sure we dust ourselves down and get some results that we will need.”

Pubs around the city center were packed by lunchtime on Saturday with banners stating their Premier League arrival prevalent. This city on England’s south coast was ready for the big time.

Welcome to Brighton! The city is buzzing ahead of their @premierleague debut. I'll be at Brighton v Man City today. #BHAFC #MCFC #PLonNBC pic.twitter.com/DSEhvMjDuU

Around the city the usual tourists had arrived with London Victoria and London Bridge train stations just an hour away, but Manchester City fans were plentiful and everywhere you looked there was a reminder of how big of a day this was.

In a cosmopolitan city which welcomes anyone — think Williamsburg in Brooklyn, but an hour away from New York City and on the coast — Brighton will have the eyes of the world watching their team.

20 years ago Brighton were on the brink of extinction and facing relegation from England’s fourth-tier on the final day of the season. Late heroics meant they were saved, for at least a few months, but today will have seemed like a dream for their long-suffering fans.

Forced to relocate to Gillingham, over 70 miles away, to play home games after their Goldstone Ground home was sold off to property developers, they eventually returned to Brighton to play in a converted athletics stadium, the Whitdean Stadium, which had temporary bleachers, a running track around the outside and a long-jump pit behind one of the goals. For years they struggled in the lower leagues sponsored by the record label of  one of Brighton’s favorite sons, Norman Cook, AKA Fatboy Slim, as they battled and scrapped to no return to the abyss.

Eventually Bloom took over and helped bankroll the deal for their incredible Amex home and Brighton will now be at the top of the list for every away PL fan to visit this season.

When Bruno Saltor led the Seagulls out on Saturday with “Sussex by the Sea” blaring out over the loudspeakers, it will have made every Brighton fan pinch themselves.

They’ve come close to promotion in recent seasons, missing out in the agony of the playoffs, plus also had deep cup runs, but Saturday proved that this is a city ready for the big time and they are no strangers to visitors from around the world each and every day.

From its quaint cobbled streets housing vegan eateries and old pubs, to its seafront delights and comfortable climate (for England, anyway) Brighton is already up there with the coolest cities to have a Premier League team and the city is regularly voted the “hippest” and “happiest” place in the UK.

A brand new home for @premierleague games! Beautiful day down by the beach here in Brighton ahead of #BHAFC v #MCFC. #PLonNBC pic.twitter.com/SKxptB6cuF

Despite the result fans of the Seagulls were still a happy bunch.

Lifelong Brighton supporters marveled at the extra hustle and bustle about the seaside town as the TV cameras rolled into town from across the globe (including our full crew on their UK tour) with journalists in the press room at the Amex wowed by the likes of Steven Gerrard and Frank Lampard on location as pundits.

They won’t be the last.

“According to local reports tourism is on the rise and it will get a massive boost from this,” George explained. “This is a summer town so throughout the winter we are going to get thousands of away supporters and many others here, so that will only help.” 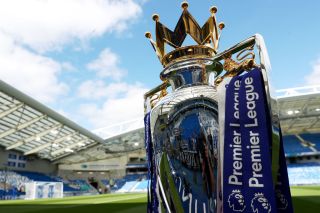 On the pitch Brighton will need help to try and stay in the PL with Bloom set to dig even deeper into his considerable pockets to fund a few more transfers (they broke their transfer record twice last week, mind you) before the end of the summer transfer window in just over two weeks. But given where Brighton have come from in the past two decades, the challenge of staying int he Premier League doesn’t seem insurmountable and isn’t as daunting as having to survive as a club.

“It is a smaller challenge than when we’ve been on the brink in the past but it is still a huge challenge” Perret said. “But one we can do.”

When Brighton walked out at the Amex on Saturday at 5:30 p.m. local time, whatever happened on the pitch over the next 90 minutes it was a “I was there” moment for their fans.

It was also a “look at how far we’ve come” moment.

“I thought of days at the Goldstone when I was young,” Perrett said as he watched his beloved Seagulls walk out to make their PL debut. “I was there with my mom and my sister and I could go and touch the grass, climb over the little fences there. Those were the good days but the whole game is different now. Those were the good times. And the good times are coming back now, for sure.”

Hughton hopes to bring the good times back but is also eager to write new history when asked if he’s now glad to get Brighton’s grand day out of the way.

“I must admit there is a little element of that. It is understandable for the history of this club and our first game in the Premier League that it was going to be a big occasion,” Hughton said. “It was going to be a big occasion whoever it was, but I think the fact that Man City were coming made it even bigger. My responsibility is to make sure we are a Premier League team next season. We have a realistic group of supporters that were excellent today.” 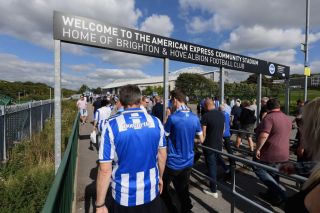