Heading into the home stretch of the Major League Soccer season, some thoughts on where the 2017 season stands.

Toronto… holy smoke! A friend of mine gave me tickets to take my young son to BMO Field for a match-up between Toronto FC and San Jose on Saturday, so we crossed the border to see the Reds hope to clinch a playoff spot versus the Earthquakes.

San Jose was coming off a 3-0 win in the Cali Clasico and another victory would’ve boosted the Quakes into the Top Six. Now bringing a second grader to a game, all I was hoping for was that TFC would handle its home field like the majority of MLS, score a goal so the kid could cheer, and to not be sucked into the vortex of overgrown Toronto traffic.

The game gave us that, and then some, with the Reds rolling to a 4-0 win and leaving me with the thought that this TFC team has two big things we’re not often talking about: a masterful coach in Greg Vanney and a “gem unearther” in GM Tim Bezbatchenko.

The Reds move so well with and without the ball, a master class in shape. Days after Costa Rican star Marco Urena exploited space in the United States back line, Vanney’s defensive corps — which includes USMNT captain Michael Bradley at CDM — either eliminated the channels for San Jose’s star and, at one point, forced Urena to dribble the width of the defense just to find a step in the corner.

Knowing the many Americans in TFC’s XI, the Reds’ clear understanding of their duties and roles, and with Urena’s work against the U.S. fresh in my mind, I literally wondered for a moment if the U.S. shouldn’t just hire Vanney and call up TFC’s 3-5-2 for next month’s World Cup qualifiers, plugging Christian Pulisic in for Sebastian Giovinco (TFC players below in bold).

Howard (Not yet, Alex Bono)

All of TFC’s center backs in its 3-5-2 were marvelous with the ball, and the team seemed especially dangerous when it was on the left peg of Chris Mavinga. The left-most CB allows Justin Morrow to fly up the side of the field. In the middle, it’s Drew Moor who shows an innate ability to play off of Bradley.

For TFC, Bradley is the marshall expected by USMNT fans, and this simply isn’t because MLS is different from CONCACAF competition. He tries just as many creative balls and does get caught jumping towards the ball, but his midfield mates quickly suck into the ball.

This is true for essentially every position on the field, as TFC does a tremendous job attacking the ball when it reaches vulnerable points of opposition positions. If an attacker gets too tight to the end line or, even better, the corner, either Morrow or right-sided wing man Steven Beitashour are quickly on the case, pressing.

Keeping in mind that 27-year-old Jozy Altidore and 30-year-old Sebastian Giovinco as a pair are borderline unplayable at this level, the Reds attack is augmented by savvy pick-up Victor Vazquez from Club Brugge and Barca’s famed La Masia Academy. And when trio-completing Marky Delgado went down, the Reds were able to turn to TFC vet Jonathan Osorio.

And, by the way, note how an incisive pass victimizes Honduran center back Victor Bernardez to help Altidore beat Danny Tarbell, the promising American backstop who had a day to forget at BMO Field.

“You just can’t give these two that kind of space.”

Seeing a match in person without any writing duties usually brings a few new reflections to mind. Last year in Orlando, I saw visiting NYCFC midfielder Frank Lampard dominate physically in a way that showed the previous criticism of his career status in MLS was ridiculous.

This year, it was the fact that this Toronto side can not only snare a treble with the Supporters’ Shield, Canadian Championship, and MLS Cup, it can compete with anything CONCACAF will offer in the Champions League. It’s a shame it’ll have to keep its corps in tact over an offseason in order to do so.

Bonus TFC/MLS in a nutshell fun fact: The flags on the left are indicative of how Major League Soccer would love its international and American stars to help raise the tide for all American boats, in this case on a Canadian team (Stats via WhoScored.com): 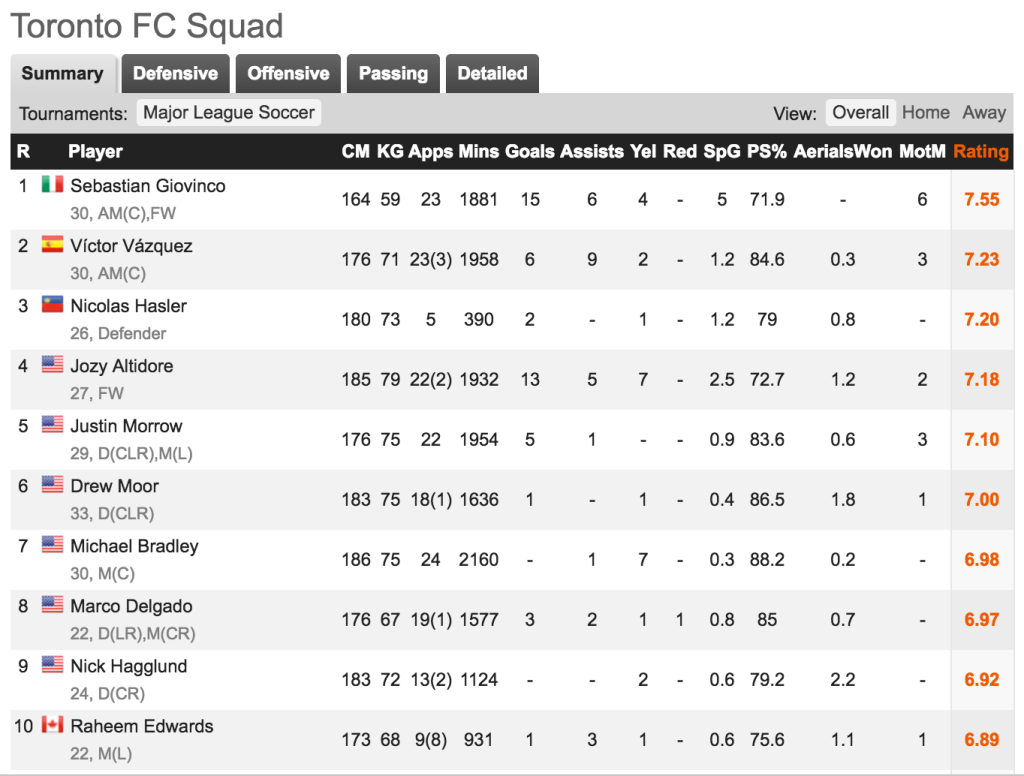