Many of you will still be scratching your heads as to why a fully-fit Geoff Cameron flew over 4,000 miles to be an unused sub for the U.S. national team over the past week.

Here are some answers.

Despite playing a full 90 minutes for Stoke City against Southampton before the international break, U.S.defender Cameron did not play a single second for the USMNT as they crashed out of the 2018 World Cup.

Pro Soccer Talk understands that Cameron, 32, held talks with Bruce Arena at the start of the international break where he was told he was not fit enough to play and Omar Gonzalez would be playing ahead of him. End of discussion.

[ MORE: Was is impact of USA missing the World Cup? ]

Cameron was, understandably, frustrated with the decision after working his way back to full fitness (after two weeks out with a hamstring injury he suffered against Manchester United in mid-September) and proving his sharpness for Stoke in the Premier League.

Asked for a comment by Pro Soccer Talk, Cameron didn’t want to get too involved in the debate over why he wasn’t used by Arena: “This is not the time for me to get involved in this discussion. It is for someone else to explain why.”

#USMNT line-up thoughts – if Geoff Cameron is healthy (played 90min vs So’ton at weekend) He should be starting. Bad vs CR but is a gamer.

No other center back in the current U.S. squad had more caps than Cameron heading into the last international break and his experience could have made a huge difference.

Shown on TV sitting off to the side of the U.S. bench next to drinks cooler at the archaic Ato Boldon Stadium as the USA’s World Cup hopes faded late on against Trinidad and Tobago, Cameron’s blank expression said it all. He was resigned to watching on in the USMNT’s moment of need.

The former Houston Dynamo star is said to have accepted the decision but it remains a bizarre one. Particularly when analyzed after the fact that Gonzalez scored a horrendous own goal in the defeat at T&T, plus the U.S. defense was generally shaky in both of their final two CONCACAF 2018 World Cup qualifiers.

Arena could have brought in Cameron in place of Gonzalez (who played for Arena at the LA Galaxy in their 2011, 2012 and 2014 MLS Cup winning teams) or even gone with three at the back at T&T in the Hex finale where a point would have been enough to take them through to the World Cup.

Pro Soccer Talk understands the squad has since questioned the tactics from the manager to go gung-ho with the same starting lineup just four days after beating Panama in a draining must-win situation in Orlando. Playing a diamond in midfield and not giving Michael Bradley extra help to protect a shaky back four is also said to have particularly frustrated several members of the USMNT. 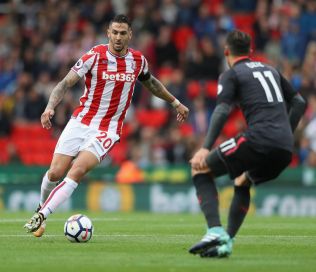 When it comes to Cameron’s omission, this is all rather confusing.

Before the international break had even started, and Cameron had even got back on the pitch for Stoke City, Arena confirmed the center back would be in his squad for the crucial games no matter what.

Arena then made a point of calling out his two center backs against T&T, Gonzalez and Matt Besler, in his most specific criticism of the team shortly after their shocking defeat.

“Our center backs were not confident enough with the ball, and often in the first half we were really playing eight against 10 because we needed to carry the ball and bring a player to the ball and move it a little bit quicker,” Arena said.

Cameron is, no doubt, the USA’s best ball-playing defender. Composure on the ball is what he is know for.

So much so that he often excels in central midfield for Stoke City and did so markedly at the end of last season where he won several Man of the Match awards against Chelsea and Liverpool in home games for the Potters. Of outfield USMNT players, only Clint Dempsey has played in more Premier League games all-time than Cameron and he signed a new deal with Stoke last May as he’s now in his sixth-season with the club and hugely valued by Mark Hughes and the Potters’ fans.

There is no doubt Cameron has had some tough times for the U.S. with his display alongside Tim Ream in the USA’s defeat to Costa Rica in September heavily criticized, even if his own mistake came late in the game with the match already lost. But he did come off the bench and played a big part in the U.S. grabbing a point at Honduras a few days later to prove that the Costa Rica performance was just a blip.

Omar own goal, then should've given a PK… if ONLY there was a regular mid-table Premier League CB on the roster… #USMNT

He has also put in sublime defensive performances for the U.S. in recent years with one of the best-ever displays from a U.S. player at the Estadio Azteca back in the summer as he held the USMNT’s defense together as they clinched a point at Mexico in a World Cup qualifier. Not to mention his display, and goal, in the 2015 CONCACAF Cup for a spot at the Confederations Cup and his rock-solid partnership with John Brooks in the USA’s run to the 2016 Copa America Centernario semifinals.

All of this adds up to why serious questions should be asked about Arena not starting one of his key players in the USA’s biggest two games of the past three years.

Will Cameron suit up for the USMNT again?

It remains to be seen what lies in store for him and many other U.S. national team veterans such as Clint Dempsey and Tim Howard but the road appears to be coming to an end for most. A friendly game on home soil could perhaps be scheduled next month during the November international break for them to say farewell as they retire from international duty.

As we continue to dissect the decisions on the pitch which cost the U.S. a World Cup spot for the first time since 1986, Arena’s bizarre decision to omit Cameron will be seen as one of the key reasons they didn’t make it to Russia 2018.