MANCHESTER — The gray skies over the City Football Academy would have produced a grimace from most, but a towering Brazilian goalkeeper was smiling from ear to ear.

Ederson Santana de Moraes strode into the room with a wink and a smile to imitate the smiley face emoji tattooed just behind his left ear.

The boy from Sao Paulo feels at home in Manchester after his $46 million move from Benfica in the summer (which made him the most expensive goalkeeper on the planet) and just over a week since he made his debut for the Brazilian national team he is being lauded by fans and pundits across the world.

Siting back in his chair as he looked out at the dour Manchester sky and the meeting room lights glistened off the braces on his teeth, the 24-year-old is a long way from Lisbon or Sao Paulo.

“It has been a really positive experience so far,” Ederson said, via a translator. “Obviously the cities are a little different. Lisbon is more tropical, here it is more cold and rainy. But I am settled in well, I like life here and I am ready and prepare for any circumstances. I am settling in here very well.”


Ederson played the hero for Man City less than 24 hours earlier as he saved a penalty kick in their hugely important UEFA Champions League win against Napoli. Today he was back at the training ground and was taking part in a SkillsCity app challenge in conjunction with the club launching its first-ever US SkillCity final this December in California.

The competition (presented by Nexen) is open until November 19 for young players aged 5-14 across the U.S. who can submit their best skills, following guidance from City’s coaches, via the app ahead of the final in California where eight winners will be announced from 32 players selected from across the USA. It’s a novel idea and the prize will be a VIP trip to Manchester in 2018 to see a game, stay at the CFA and more.

“I remember when I was a kid I couldn’t watch much on TV because the games were not on,” Ederson explained. “Having these kind of apps these days help a lot to develop skills and help the kids to practice, to improve and test their skills. It is really positive.” 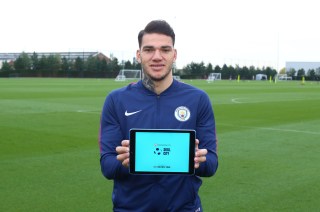 Ederson’s skills have certainly been positive since he arrived at City as the Brazilian has been hailed as the missing piece of the jigsaw in Guardiola’s side.

His composure with the ball at his feet and ability to come charging out of his goal has provided plenty of confidence to City’s defense.

“I was born with those skills, being able to play with my feet. When I started playing as a player I was playing as a defender or a full back. That helped me with my adaptation to play with my feet. Through time I have developed those skills and even now I keep training with my feet because it is very important,” Ederson said. “In the past maybe I didn’t spend so much time training with the players that were in front of me. Now we are more involved and maybe that is why I can now show my qualities with the football.”

Ederson’s confidence in coming off his line saw him injured in City’s 5-0 win against Liverpool earlier this season as he was clattered by Sadio Mane and suffered a deep gash on his face which required several stitches.

That resulted in Mane being sent off and Ederson being carried off but his quick recovery impressed City’s fans and enhanced his growing reputation as a steely competitor who is a formidable last line of defense.

“It has been a good start for me here at City. It has been a very positive experience for me so far and the fans help me a lot and their support is very important for me. What happened in the Liverpool game with Sadio Mane, those things can happen in football,” Ederson said. “I got injured and I could have continued playing but the cut was quite big so they wouldn’t let me continue.” 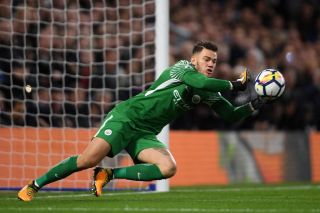 Ederson’s speedy recovery saw him play a few days later at Feyenoord and the improvement in City’s defense has been stark since his arrival with just four goals conceded in eight games in the PL so far.

“I think I am a calm goalkeeper and a calm person as well and I try to give calm to my teammates,” Ederson said. “I help a lot in the build up and the long balls as well. But mainly I would say a goalkeeper must be a calm person to cope with the pressure to handle when you make a mistake. I think that’s really important and it helps you a lot to develop your skills.

“I think modern football has evolved a lot. Goalkeepers do several things during the game. They help in the build up. That is very important, to play with your feet, it is very important to know how to read the game and obviously save balls and also handle the pressure when it comes to the crunch time.”

Where does Ederson’s extreme ability and composure with the ball at his feet come from?

Look no further than the club where he came through the ranks and who he supported as a kid, Sao Paulo, to find his idol.

“Rogerio Ceni who played for Sao Paulo. He was my idol. He was the guy I looked up to and he played for the same club, Sao Paulo, for 25 years. He won a lot of trophies and had a lot of chances to leave the club but he stayed there. He became the main idol of the club. All the skills I have now, I would say that’s because I saw him,” Ederson smiled. “He played well with his feet and was good in the build up and he was even a goalscorer with penalty kicks and free kicks. He made history at the club and he was my main idol.” 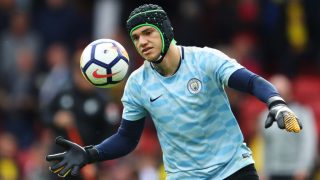 A revelation with his feet in the Premier League so far, will Ederson, like his hero, be coming up to take penalties and free kicks anytime soon?

“No free kicks… but if there is a chance to ever take a penalty I am going to ask the manager and I would do it!” Ederson laughs.

Pointing to the tattoos all over his body and explaining their significance, including a passage from the bible on the back of his left calf and other markings to honor his family, it is easy to forgot how far Ederson has come in such a short space of time.

He moved to Benfica from Brazil as a 16-year-old and then dropped down to the third division with Ribeirao on loan before moving to Rio Ave where he made his name playing regularly, before heading back to Benfica and taking his chance after an injury to the regular starter.

Discussing his hometown of Osasco, Ederson revealed he has no plans to return to Brazil when his playing days are over.

“I left my hometown very early. I cannot remember much. I have friends and family there so when I have holidays I try to go there to my home village. It is very calm but because I left very early I don’t miss it that much,” Ederson said. “To be honest, I am not planning to go back and live there when I retire. The plan is to stay here in Europe with my family because it is calm and safer so in my future, my family and I are thinking about when I retire we will move to Portugal because of the language and the lifestyle.”

When asked what he and his teammates can achieve this season after winning seven of their opening eight PL matches and all three of their UEFA Champions League group games, Ederson is confident Pep Guardiola has built a side who can dominate now and for many years to come.

“I think Man City has built a really great team, a really young team both for the present and the future. I think we are ready to fight for everything,” Ederson said.” The Premier League, the cups, the Champions League. If we keep doing the good work we are doing, we will have a lot of chances to win one, two or three trophies. We must keep working hard and focus on the targets.”

Ederson achieved one of his long-term targets last week by making his debut for the Brazilian national team in their World Cup qualifying win against Chile.

He is dreaming of being on the Selecao’s plane to Russia for the 2018 World Cup next summer.

“I was very happy to play my first game with Brazil and also that it was in my city, Sao Paulo, with my family watching at the stadium. We won and we got a clean sheet, so it was perfect,” Ederson smiled. “I’m following this path towards looking at the World Cup on the horizon and I would be very happy if I was chosen in the final list. But we have to wait because the season is long but it would be a dream come true to play in the World Cup because I have been working so hard in the last years to be able to be there.”

“My Brazilian teammates [Gabriel Jesus, Danilo, Fernandinho] helped me a lot here to adapt and settle in. I knew them before from the national team, so obviously they make my life easier here.”

Ederson’s confident and commanding displays are making City’s chances of winning it all a lot easier this season.

Pep seems to have finally found the playmaking goalkeeper he has craved since he arrived in Manchester.