With 2020 just a few years away, Detroit could have a faster solution to its stadium conundrum as it seeks entry into Major League Soccer.

The Detroit Free Press is reporting that the city’s expansion group — led by Cleveland Cavaliers owner Dan Gilbert and Detroit Pistons co-owner Tom Gores — has added the Ford family to its partnership as Detroit moves closer to having itself MLS bid heard.

In addition to the Fords joining Gilbert, Gores and the rest of the group, it seems as though Ford Field — where the NFL’s Detroit Lions currently reside — is seen as the venue in which the expansion side would play upon entry into the league.

Detroit was previously planning a $1 billion stadium project at the Gratiot Avenue jail site, with a 23,000-seat venue in the cards. However, that longer seems to be the case.

“Partnering with the Ford family bolsters our powerhouse group and provides a perfect stadium solution in the heart of Detroit’s central business and sports and entertainment districts,” said Detroit Pistons vice chairman Arn Tellem, who is also a member of the Detroit ownership group. “Over the last two years, we have invested significant time, effort and resources into our bid to bring MLS to Detroit. After careful study and analysis, we concluded that the downtown location of an MLS stadium is paramount to an MLS team’s success.

“And no MLS stadium sits in a better downtown location than Ford Field.  We also saw additional evidence that multi-use stadiums can be very successful in the right situation and we believe our new proposal is superior for the city and for MLS in every way.”

The parties involved are expected to make a push towards expansion in 2020, where the entry fee is $150 million, as opposed to waiting until 2022 when the fee is expected to increase for clubs interested in joining MLS.

As it stands, Detroit is one of several major cities being considered for expansion. Los Angeles FC (2018) and David Beckham’s Miami project are the next clubs in the works right now, while Cincinnati, San Antonio, St. Louis, Nashville and others appear to be close behind in the pecking order.

MLS commissioner Don Garber has previously stated that the league is looking to reach 28 teams by 2024, and that would be the cut off for expansion.

Garber and MLS released the following statement on Thursday following the reports of Detroit’s amended bid. 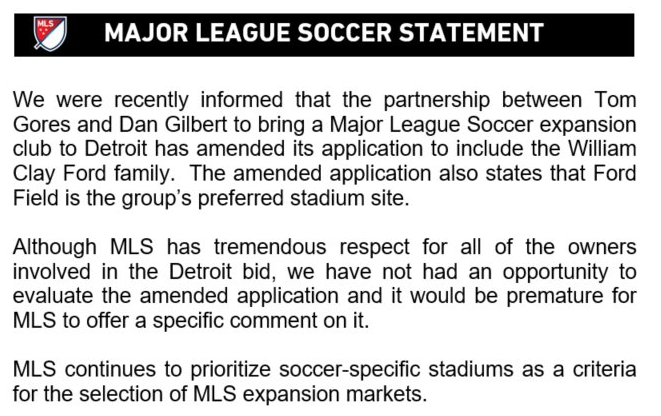