The U.S. national team will close out a disappointing 2017 by playing against Portugal next Tuesday, Nov. 14, in Leiria.

Interim boss Dave Sarachan named plenty of youngsters (12 players under the age of 24, to be exact) in his 21-man squad for the friendly, with four teenagers included and plenty of players given a second chance to impress after being overlooked by Bruce Arena in the past 12 months.

Here are my thoughts on the roster for the final game of the year for the USMNT and what impact it may have as the U.S. is still reeling from failing to qualify for the 2018 World Cup.

If you’re going to play the kids, you might as well do it now. Everyone connected with U.S. Soccer needs a boost right now and showing that there’s a bright future with a talented young crop coming through should do the trick.

Portugal do not have their first-choice lineup for this game with the likes of Cristiano Ronaldo, Nani, Jose Fonte, Rui Patricio and William Carvalho all left out. This is the perfect time to start Weston McKennie, Ethan Horvath, Cameron Carter-Vickers and Tyler Adams to see if they’re capable of making the step up. I’d start as many youngsters as possible. What have the U.S. got to lose?

Of the four teenagers, McKennie is playing regularly in the Bundesliga at a huge club, Adams has had a fine season for New York Red Bulls and the U.S. youth team, CCV is a regular for a Sheffield United side chasing promotion to the Premier League and Sargent deserves his chance after starring for both the U-17 and U-20 teams and getting a move to Werder Bremen. Is Sargent going to start ahead of Jozy Altidore anytime soon in the big U.S. games? Probably not. But until you try him (dare I say that chucking in another young 17-year-old, Mr Pulisic, worked out pretty well…) you won’t know what he’s capable of.

If you don’t play the kids in this game, especially the European based crew, when the heck are you going to?

I’d like to see a return to a solid 4-5-1 which becomes a 4-3-3 going forward. It’s all a bit fake with Sarachan only in charge for one game and the strange scenario of Arena’s old coaching staff all still in place, but a new manager for the U.S. can do a lot worse than getting back to a hard-nosed defensive system which allows the likes of Christian Pulisic to float free in the attacking third (a la Clint Dempsey and Landon Donovan in years gone by) when the U.S. has the ball.

Club Brugge goalkeeper Ethan Horvath has impressed me whenever I’ve seem him play, so I’d give him the nod in net, while Bill Hamid may be the long-term challenger to Brad Guzan for the No.1 jersey after his recent move to Europe but Gonzalez is also worth a go. Simply put, as always, the USMNT have plenty of goalkeeping options. DeAndre Yedlin will be the long-time right back for the U.S. so you might as well play him, while Jorge Villafana is probably on one of his last chances with the USMNT after several shaky displays.

Carter-Vickers and Miazga starting together may be a little too much right away but you could even play a 3-5-2 formation with Brooks, Miazga and CCV as the center backs. McKennie and Gooch will put in great shifts out wide and are comfortable on the ball, while Danny Williams, Adams and Kellyn Acosta have a perfect combo of power, trickery and passing ability. Up top, why not start Sargent? We know what Dom Dwyer, CJ Sapong and Juan Agudelo can do, so the youngster deserves a chance to start and has shown his predatory instincts around the box for the youth national teams. 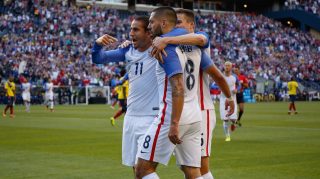 Danny Williams, Alejandro Bedoya and Eric Lichaj will all be aiming to prove they deserve to be starters for the USMNT moving forward as they are among a handful of more experienced players in this squad.

[ MORE: Williams sits down with JPW ]

Williams, 28, has perhaps been one of the most missed players in recent months, first under Jurgen Klinsmann and then he was totally blanked by Arena. The German-American midfielder has become a starter for Huddersfield Town in the Premier League this season and played a pivotal role in their recent defeat of Manchester United. His mixture of athleticism, guile and ability to make surging runs forward from midfield would’ve helped the U.S. out massively over the past 6-12 months. He has worked extremely hard to get back into the fold and deserves to stick around.

Bedoya, 30, played 11 minutes across the USA’s two key World Cup qualifiers last month and the Philadelphia Union man will want to prove he still has plenty left in the tank for the USMNT. He could play in a new-look central midfield with Williams and Acosta but will he get in the team ahead of Michael Bradley when he’s available again in 2018 after the conclusion of the MLS Cup playoffs? A strong display against Portugal will be key to securing his long-term future for the USMNT.

Lichaj, 28, has been in and out of squads under Klinsmann and Arena but the Nottingham Forest full back is reliable and versatile. He should be in every U.S. squad due to that fact that he can play both right and left back, and at a stretch he can play in midfield too. Lichaj is also in great form and was named Man of the Match on multiple occasions for Forest last month.

The likes of Bradley, Altidore, Geoff Cameron, Dempsey, Bobby Wood, Jordan Morris, Pulisic and Guzan will all likely be available in 2018 but aside from that experience core, over 15 places are now totally up for grabs following the humiliation of failing to qualify for the World Cup in Russia next summer.