Player ratings from the U.S. national team’s exhibition clash with Portugal, the reigning European champions, and the first game of a very long four years as the USMNT rebuilds from the ground up with two eyes toward the 2022 World Cup…

[ VIDEO: McKennie scores on his USMNT debut… and a Horvath howler ]

GK — Ethan Horvath: 3 — Hit the above link to see Horvath’s calamitous howler. That ain’t a great way to begin your bid to take over the no. 1 shirt from Tim Howard and Brad Guzan. Subbed off at halftime, which was the plan before kickoff, hopefully Hovath’s confidence isn’t too badly damaged without the chance to redeem himself immediately.

RB — DeAndre Yedlin: 6 — The best thing that can be said of Yedlin is this: you know what you’re going to get from him every time he steps on the field these days, and that’s something you couldn’t always say of the 24-year-old. He’s a constant presence and performer, and should have the right back spot locked down for much of the next two World Cup cycles.

CB — Matt Miazga: 6.5 — The best part of Miazga’s game is how quickly he reads, and reacts to, dangerous situations. There’s no one in the player pool who defends on the front foot as much as Miazga. As such, he’ll always require a partner who’s a brilliant emergency defender, which is hardly the strength of John Brooks, given his size and lack of recovery speed.

CB — John Brooks: 6.5 — Seeing Brooks on the field after three months out with a thigh injury only served as a reminder that his presence might have made a massive difference last month — not that they shouldn’t have been able to qualify without him, mind you. According to recently departed head coach Bruce Arena, Brooks and Miazga could have very well been the starting duo in Russia; with any luck, the same will be true of Qatar in four years’ time.

LB — Eric Lichaj: 5.5 — While Lichaj is somehow, against all odds, still only 28 years old, he’ll be 32 years old when the next World Cup begins. If he’s called into the next two or three USMNT camps, we’ll take serious the possibility he’s an option in the medium- to short-term. Until then, he’s starting at left back simply because someone has to.

CM — Danny Williams: 7 — With the leash cut all the way off of Weston McKennie and Kellyn Acosta ahead of him, Williams had but one job against Portugal: protect the backline when the youngsters’ press is broken. It happened on a few occasions, and Williams put out the majority of those fires. It’s a trio that lacks a true playmaker — the sexy factor, if you will — but proved highly functional for the 84 minutes they shared the field. 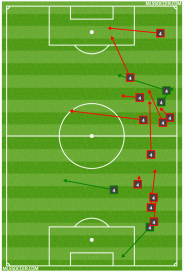 RM — Tyler Adams: 6 — Adams, uh, struggled in the first half (see passing chart, at right — that’s a whole lot of red arrows). He started the second half of his USMNT debut much brighter, though, as he got on the end of Danny Williams’ cross to the back post and forced Beto to make a spectacular, sprawling save. Adams is still a player with a “permanent position,” thus an important period of his development lies directly ahead. In 2017, we saw him play at least one game at all three levels wide on the right, in central midfield, and the based of the midfield.

CM — Weston McKennie: 8 — The 19-year-old Schalke midfielder 1) scored a goal on his debut; 2) smashed the crossbar with a header from close range; and, most importantly, 3) provided a bit of renewed excitement around the USMNT. McKennie and Acosta proved a formidable central midfield pairing, capable of pressing high up the field and pushing the tempo. Where they struggled, however, was in unlocking further advanced attackers into the final third. That will, in theory, come with time and repetition — two things the USMNT has in abundance over the next 18-30 months.

On his #USMNT debut, 19-year-old Weston McKennie led the team with 60 touches, all over the field (attacking left-to-right): pic.twitter.com/Jrq3XpWq0X

CM — Kellyn Acosta: 6.5 — Acosta and McKennie had very similar games to one another, with the obvious exception of McKennie’s goal and near-goal. Given that Acosta is three years McKennie’s senior, you’d have hoped to see a bit more connectivity from his side of the field. Alas, no such luck in this one.

LM — Juan Agudelo: 5.5 — The good: in his 59 minutes on the field, Agudelo misplaces just three passes. The bad: not a single one of his 15 completed passes was played in the forward direction (in fact, not a single one of his 18 attempted passes was played forward). He’s already a tough fit on the wing further forward; playing the 24-year-old (yes, really) even deeper seems an impossible exercise to assess.

[ MORE: Brooks-Miazga the center-back partnership of the future ]

FW — C.J. Sapong: 5.5 — With the midfield set up to create turnovers and chances on the counter, Sapong’s physical presence and accompanying hold-up play was hardly a perfect fit, but he made the most of his very limited opportunities.

Sub — Bill Hamid: 6 — Only forced to make two saves — both routine — in his 45 minutes on the field, Hamid managed to avoid hurting his stock.

Sub — Cameron Carter-Vickers: 5 — While Miazga’s strength is the speed with which he reads the game, the polar opposite must be said for Carter-Vickers, thus he’s not terribly suited to play alongside Miazga. Hopefully this isn’t the last time we see them play together.