The results of PST’s Big American Soccer Survey are in, and our staff will be walking through the results of thousands of votes in a series of posts this week.

We didn’t realize you could acronymize it to BASS, or else we would’ve done it sooner. So we continue BASS with one key question that is at the heart of the American soccer community right now: who is most responsible for the USMNT’s failure to make the 2018 World Cup?

We provided the following five answers in our survey.

Here’s who got the ultimate blame: Sunil Gulati with 36 percent of the vote.

Yes, it isn’t rare for the head of the organization to bare the brunt of the blame for a nation not qualifying for the World Cup but in this instance Gulati has well and truly had the blame put at his door.

It is worth noting that only 16 percent of voters blamed Bruce Arena and eight percent said it was Jurgen Klinsmann’s fault (let it go, guys). 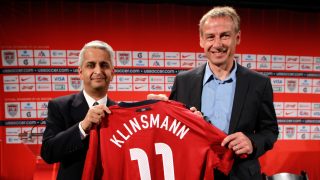 Yet Gulati only just topped the pool ahead of an area which is the biggest issue for American soccer right now: youth development.

That doozy of a topic accounted for 31 percent of the votes and points towards a much larger debate than just a team playing poorly, or being poorly coached.

Gulati is of course responsible for hiring and firing coaches and his decision to oust Klinsmann after two games of the Hex, or even hiring him in the first place, has been severely questioned.

His decision to then bring in Arena as his replacement was ultimately the wrong one, even if, in Gulati’s words, the U.S. was “two inches wide or two inches in” from being at the World Cup after Clint Dempsey‘s late effort against Trinidad & Tobago hit the post.

“You don’t make wholesale changes based on the ball being two inches wide or two inches in,” Gulati said. “We will look at everything, obviously, with all of our programs from the national team to development. We have a lot of pieces in place that we think are very good and have been coming along. Tonight wasn’t what we hoped for.”

First, they want Gulati to leave his role (which seems likely), and secondly, a wholesale change to youth development with the “pay-to-play” model continually lambasted as the root of the USA’s problems in not producing enough quality talent.

Simply put, the overwhelming majority of U.S. soccer fans believe the real reason the USMNT isn’t heading to Russia next summer is due to problems with youth development and the decisions that Gulati, the one who oversees the entire U.S. Soccer Federation (USSF), made.

Of course, Gulati is likely going to be out as USSF president in February 2018 when the presidential election is held. He has yet to declare his interest in running once again to lead the USSF after 11 years unopposed, but it is deemed highly unlikely he will run for re-election.

Should Gulati get the blame here?

The fact that he, Arena and even interim USMNT coach Dave Sarachan still believe that there isn’t much wrong with the way the U.S. is developing players right now is the biggest issue. Yes, there are some talented groups of youngsters coming through the system right now, Weston McKennie and Tyler Adams proved that during the 1-1 draw with Portugal this week, but the main issue is that U.S. Soccer believes it can continue to do the same things and get different results.

That’s why Gulati must go in February and fresh ideas should be implemented to eradicate the “pay-to-play” model and allow the best players to get opportunities despite the social or economic background they’re from in the USA. End of discussion. That’s what needs to happen for the U.S. to move forward and it will be a long, arduous road ahead.

Gulati will not oversee that as he pushes on with his plans for the 2026 World Cup in the USA, Mexico and Canada, and when all is said and done, his role in the 2018 World Cup qualification debacle is clear: he should take the blame.

Time will tell if that’s the case but right now the American soccer community believes Gulati’s poor leadership was the main reason the U.S. won’t be in Russia at the World Cup next summer.