With the draw for the group stage of the 2018 World Cup taking place in Moscow on Friday, there’s plenty of excitement building.

Below our panel of writers discuss the key topics heading into the draw including the lack of the U.S. men’s national team, “Group of Death” scenarios and the dark horses.

Here it is, World Cup fever has begun. As journalists who watch the U.S. team closely, has it sunk in yet that the USMNT won’t be at the World Cup for the first time since 1986? What feelings did you have this time four years ago before Brazil 2014?

Joe Prince-Wright: It hasn’t really sunk in yet, to be honest. Tomorrow will be one of the key moments when we sit there and realize ‘damn, the USMNT won’t be at the World Cup.’ It will be a major part of the acceptance stage of this U.S. debacle. Four years ago I was full of excitement to see who the U.S. would get and trying to work out their multiple “Group of Death” scenarios. Now, there’s still plenty of excitement about all of the big players and teams and who they will face, but still a nagging sense that something isn’t quite right. I’m more intrigued to see what watching a World Cup in the USA, without the U.S. participating, will be like this summer.

Nick Mendola: It has sunk in, mostly, but that doesn’t change the anger and distrust toward the team and federation. There are just so many reminders, not the least of which was seeing the U.S. B-Team stick with Portugal’s B-Team in last month’s friendly. Yeah, it’s an odd metric of sorts, but the USMNT finished one point from the World Cup and lost to Trinidad’s B-Team with Geoff Cameron on the bench and both Fabian Johnson and Weston McKennie at home on the couch. Any chance to feel even a tiny bit better about the team was bungled by post-elimination hierarchy press conferences and then Bruce Arena’s decision to go on TV during the Portugal game. Wow. There’s still a lot of anger there. Does that mean it hasn’t sunk in?

Kyle Bonn: The World Cup is the World Cup, and the excitement will always be there, but I can’t lie, it’s slightly mitigated this time around with the US out of the field. There’s always a passion to watch your country play and without that something definitely seems to be missing in the buildup. 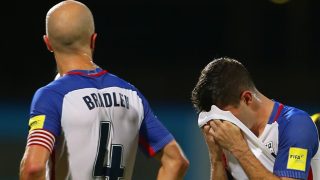 Dan Karell: Ugh. Another gut-punch. It’s going to be sad not seeing the words “United States” on a little piece of paper picked out of a pot (Pot 3, probably?) on Friday. Around this time four years ago, I was definitely just looking at all the probabilities and I think like most people, hoping to avoid a group of death. The U.S. showed though that it didn’t matter, and finished ahead of Portugal and Ghana instead of last place where many predicted.

Matt Reed: The more I’ve thought about everything, the more clearly it has begun that there are glaring issues within the U.S. Soccer community that need addressing. Yes, it was and still is a shock that the USMNT did not qualify for Russia, but at the same time, the team’s shortcomings open the door for changes to occur over the next four years and beyond. As we saw in the USMNT’s recent friendly against Portugal, there are some solid young pieces working their way up through the pipeline, including Weston McKennie and Tyler Adams, which is a promising stepping stone for the Americans, who already have one of the world’s best young players in Christian Pulisic.

Heading into Brazil in 2014, I was cautiously optimistic about how the U.S. would perform given the sides they were paired with in group play and the talent within the squad. Considering how the USMNT showed in 2010, I thought there was a chance they could build off of their Round of 16 appearance and possibly progress a step further, however, Belgium had a big say in preventing that from happening.

Looking at the four pots of teams, pick out your ULTIMATE “Group of Death” scenario

JPW: There are quite a few here. I’m going with: Germany, Spain, Egypt, Australia. But the following four teams would also be an absolute blockbuster of a group: France, England, Costa Rica, Nigeria. Simply put, the World Cup is stacked, as it should be.

KB: Any “Group of Death” starts and ends with Spain being in Pot 2. England too probably counts, but Spain’s presence there spells doom for any Pot 3 and 4 team who finds itself in that bunch. Only 2 European countries can be drawn into the same group, which mitigates things a bit, but here are a few options:

DK: Germany, Spain, Denmark, and Nigeria. All four of those teams are strong and Nigeria could be a dark horse in the knockout round with the likes of Alex Iwobi and Kelechi Iheanacho launching themselves on the world stage. Germany and Spain are juggernauts as always and we saw what Denmark and Christian Eriksen did to the Republic of Ireland.

Which team will you want to avoid in Pot 4?

JPW: Serbia. Nobody has taken them too seriously but they have talented players 1-11, many of whom play at big clubs in Europe. Underestimate Nemanja Matic, Dusan Tadic and Branislav Ivanovic at your peril.

NM: Serbia. I’ve been so impressed with them, with Matic, Tadic, Kolarov, Milivojevic, Nastasic, Llajic, Ivanovic, and Mitrovic. I believe they can sit in and defend when needed, but also can spring some incredible attacks if they get the final ball from Tadic, Mitrovic or someone else.

KB: Pot 4 is relatively weak this time around, but Japan is quite skilled, Nigeria is always. A threat, and Australia plays with a fire that can cause problems.

DK: I’ll keep it with Nigeria. They were underwhelming at the last World Cup but still made it into the Round of 16, and with a new crop of youngsters, they could be a tough out in Russia.

MR: A number of Premier League talents up front and an experienced midfield give Nigeria an edge over the rest of the Pot 4 nations. The Super Eagles have qualified for six of the last seven World Cups, and advanced to the Round of 16 in three of those appearances. I believe John Obi Mikel and Co. will surprise a few people, although they certainly put themselves on the map in 2014. For those unfamiliar with the side, go back and watch their match against Germany in the knockout round.

What would be the easiest group scenario for hosts Russia?

JPW: Mexico, Iran, Panama would be the easiest group for the hosts. It always helps a tournament if the hosts do well but with Russia the lowest-ranked team (65th) in the competition, they’ll do extremely well to get out of any group.

NM: Russia would love to see Peru, Iran or Costa Rica, and Saudi Arabia. Playing a host city is always tricky, but the politics and patriotism of this tournament make it especially difficult. I think Russia escapes its group at a minimum.

KB: Russia is going to seriously struggle no matter who they draw, but the easiest path to the knockout would likely be something like: Russia, Croatia, Iran, Panama

DK: Well, if Russia hosts England they’ll be just fine…..kidding! Peru somehow is seeded in pot two but they clearly aren’t of the quality to be there, it’s just thanks to the FIFA rankings. Same for Poland/Portugal in Pot 1.

If you had to pick now (and you do), who contests the World Cup final and who wins it?

JPW: Germany and Brazil. And Brazil wins 2-1. This is a better defensive Brazilian side with revenge on their mind and Neymar is ready to lead the Selecao to glory.

NM: I’m torn between who wins it, but it’ll be Germany and Brazil assuming their paths don’t cross on the bracket en route to the final. Germany is the deepest team and reigning champions with enough returning players to build off that record. Brazil is the best team in the world right now and navigated the toughest qualifying route in the world with style.

KB: Until I am proven wrong, I am sticking with Germany as the best team in the world. Brazil has come a long way since Germany embarrassed them on their home turf, and I would love a Germany vs Brazil rematch, this time in the final. 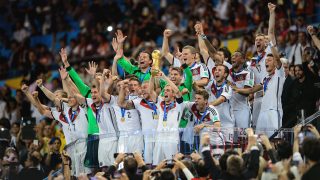 DK: It’s so hard to tell who will be tired and who will still have gas left in the tank, but I’ll say Brazil vs. France. Brazil under Tite is playing the best soccer in the world and historically they are very serious about their physical preparation and making sure all their players were fit. No one pulled out of Brazil’s last squad for the November friendlies and even the players carrying injuries were treated by the Brazilian staff. I like France because of their talented young players that I think learned good lessons in qualifying and Euro 2016 and could take that into a final run next summer.

There’s always a “dark horse” at every tournament. So, who will surprise everyone at Russia 2018?

JPW: As an Englishman I’m tempted to go with England who are definitely being overlooked, but having low expectations hasn’t worked out well in the last few major tournaments. I do think they could get to the quarterfinals, which would be a very acceptable tournament. As for other dark horses, Serbia, as mentioned previously, plus Egypt and Nigeria could all impress, plus Sadio Mane‘s Senegal have shown their penchant for upsets in the past. So, England, Serbia, Egypt, Nigeria, Senegal are the five teams to look out for.

NM: I detailed my belief in Serbia above, but I’ll proffer a second opinion: This tournament in particular seems to be highlighting European and South American teams, and I think an African team has a chance to really do some damage with a Liverpool flavor. Senegal (Sadio Mane) and Egypt (Mohamed Salah) both could do something special. Additional love for Japan and South Korea, and I’m especially excited to see Heung-Min Son on display without Harry Kane and Dele Alli righteously demanding the spotlight.

KB: Dark horse has to be England. That is a much improved team with so many bright young stars, and while everyone makes jokes about how England always flops in big tournaments, they’ll sneak up on everyone. Raheem Sterling is coming up big for Man City of late, and he’ll do so for his country in the World Cup too.

DK: Engla-Nah…they’ll underwhelm like always. Sorry Joe, haha. My dark horse comes from Pot 2. Croatia has one of the world’s best midfields with Real Madrid pair Luka Modric and Mateo Kovacic as well as Barcelona’s Ivan Rakitic. Mario Mandzukic is one of the world’s best No. 9s and the team’s defending is hard as nails. I think they have the quality to make a deep run, especially with it likely being Modric and Mandzukic’s last World Cup.

MR: Take one look at Croatia’s midfield and tell me that’s not one of the best, if not the best, in the tournament. I’m not overly confident about the team’s front group of Mario Mandzukic and Nikola Kalinic, but this team is loaded with talent throughout the squad. Also, the Blazers consistently have best kit in international soccer, so there’s that. 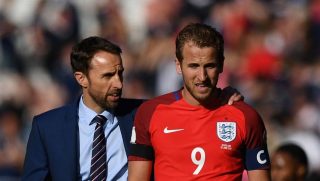