Danny Williams is living his dream in the Premier League.

A regular for Huddersfield Town, driving on their fairytale from midfield with his tattoos, pristine hair and beard and all action displays impressing Terriers’ fans, Williams is arguably in the best form of his career.

He is relaxed, confident and quick-witted as we caught up at Huddersfield’s Canal Side training complex in the center of the West Yorkshire town.

Why wouldn’t he be?

Williams, 28, is playing in his first-ever season in England’s top-flight after slogging away in the second-tier for four years with Reading before moving to Huddersfield in the summer on a two-year deal. He hailed their fans as “incredible” and saluted their start to the season as former USMNT forward and current Huddersfield coach David Wagner has them three points off the top 10 with the busy festive season ahead.

Despite their fine start to the season, Premier League survival is still the main aim and Williams has been a big part of the underdogs impressing in their debut season in the PL.

His fine form for Huddersfield has led to a return to the U.S. national team after a prolonged absence through injury and a combination of both Jurgen Klinsmann and Bruce Arena not calling him up. And not only was Williams called up to the USMNT for the first time in over a year for the 1-1 draw with Portugal last month, he also captained the Stars and Stripes for the first time in his career.

Beaming from ear to ear, Williams is still a proud man over a month removed from that draw in Leiria.

“Obviously it was a huge honor for me. I didn’t realize how big it was in the moment,” Williams admitted. “I played the game, tried to lead like I always do but it wasn’t until afterwards I realized. It had such a big impact. I got a lot of messages from everyone. It was a really proud moment and that’s why I really enjoyed it, because you go from not being invited to being captain of the team. It was also because Alejandro Bedoya had a knock. He would have captained the team but I was happy to step in.”

Williams hasn’t had the luxury of stepping in for the U.S. for quite some time.

His last USMNT’s appearance came in the friendly against New Zealand in Oct. 2016 and although he thanked Klinsmann for giving him the chance to first represent the U.S. way back in 2011 (he was the first new player Klinsmann called up) he revealed he never felt like he was truly trusted.

“I get it, I had a few bad performances but maybe because I never felt the trust, you know? When I get a lot of trust, I pay it back with performances and I think that’s the same with every player,” Williams said. “If you have confidence from the manager and all the team, you can perform, and I just feel like I’ve never really been given that kind of trust. But that’s all in the past. I’m a bit more mature and older now and nobody can break me down that easy. I’ve shown people I can fight and I want to leave that in the past.”

Asked if he was ever given a reason for not being called up by Klinsmann again, or as to why he was not picked by Arena during his ill-fated 11 months in charge of the USMNT, Williams revealed some intriguing details.

“It was frustrating but nobody really ever talked to me or gave me a reason,” Williams explained. “I didn’t even know what the reason was, you know? Some people might have said ‘you only play in the Championship’ or whatever, but I think the Championship is still a strong league and I think you could see last year with Newcastle and even the teams down there now they are big teams, big, big clubs and good football players. I could never understand why I was invited because I think in the four years at Reading I did, basically, everything in my power to show the world that I am still on a good level and I can perform. Obviously I was a bit unlucky with injuries but in my opinion nobody really spoke to me.

“Some people wanted to play the MLS guys a little more but whatever, but Bruce Arena emailed me and said ‘you’re in the picture but I haven’t really seen you.’ And I thought that was a bit strange because you must know your players, don’t you? Especially because I am not 18. I was around the camp but I read something where he said the players Klinsmann invited were German-Americans, I don’t know what it was, but I felt a bit weird about it because I played on a high level for basically now eight or nine years. But again, I didn’t really want to say anything because, what could I do? I can’t influence if a manager likes me or not but I think we could all get a fair chance. It was a bit weird but hopefully now that I’m in the Premier League, that will change.” 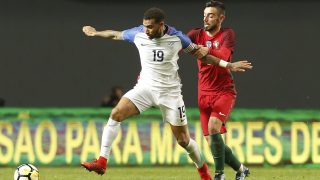 Williams has moved from the suburbs of London to Manchester and is now very much in the PL circle. He includes Manchester City’s Leroy Sane among his close friends and sees him as “sort of a little brother” who he takes under his wing.

His play his developed from a true holding midfielder to being a two-way midfielder who chipped in with several stunning goals during his time at Reading. Williams’ position has changed and it certainly seems like he would be a valuable foil alongside Michael Bradley in the U.S. midfield in the years to come.

Back to the USMNT, does Williams still want to be a leading man for the USA moving forward?

“To be honest, you have to look at the U.S. national team at the moment and who is actually playing on a high level, I mean playing in Europe in the big leagues, there are not so many players,” Williams said. “In my opinion, as long as I play in the Premier League, get the minutes under my belt, I think I have every right to be a bit surprised if they don’t invite me. Again, that’s not in my hands. The only thing I can influence is my own performance and how I do with the team and hopefully that earns me a spot with the U.S.”

Williams sees a bright future not only for himself with the USMNT, but also for the band of young Americans coming through the ranks, such as Christian Pulisic and Weston McKennie in the Bundesliga.

The midfielder rose into the Bundesliga himself as a youngster with Freiburg and Hoffenheim, before moving to Reading in 2013, and he believes that both McKennie and Pulisic will lead the U.S. in the future, supported by a growing cast of young stars who played against Portugal last month.

“They’re playing a big part of the future. I got to play with Weston McKennie and there’s huge potential there but not only him, Cameron Carter-Vickers and Tyler Adams and Kellyn Acosta, I think they are all ready to be in Europe. Then obviously Pulisic is already a superstar in the States and he performs on a high level, when you see him playing against Real Madrid in the Champions League, that is top class and I wouldn’t be surprised if he soon got a move away from Dortmund. They will play a big, big part because they are a new generation. They are kids and I remember when I was that young. They are all hungry. They are all super excited. I think that’s what it is. They want to be hungry because they still want to learn something and they like the competition. They have a big, big part in the future.” 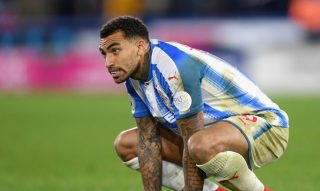 That said, the future for the USMNT doesn’t seem that exciting right now.

With the U.S. currently without a coach after Arena stepped down following the failure to make the 2018 World Cup, who would Williams like to see appointed as the next USMNT head coach and what qualities do they need to have?

He has a simple checklist: give everyone, not matter what league they play in, a clean slate.

“It doesn’t necessarily have to be a U.S. coach. It is international football. I think we should get someone who has experience and has proper ambition with a proper plan and doesn’t prefer and trust either American players or American-German players or just American-Mexican players. He should give everybody a fair chance,” Williams said. “He should look at how all of these potential players perform in their clubs and should really start from scratch. The U.S. is such a great country and not making the World Cup, it’s kind of like a scandal.”

Most would say that’s being polite.

The U.S. not reaching its first World Cup since 1986 has dominated headlines across the American soccer landscape for the past two months and with no coach, and outgoing U.S. Soccer president in Sunil Gulati, and big question marks over a host of veteran players, the USMNT is in dire straits and at a major crossroads.

Williams winced when asked if it hurt to watch on from afar as the USMNT failed to qualify for the 2018 World Cup and pointed to some politics behind-the-scenes as a major reason for the USA’s scandalous failure.

“Of course it hurts. I am obviously 28 now. I saw that as an opportunity to make a name for myself again. I thought ‘okay, I am now in the Premier League and hopefully I get a chance to get called in and show what I can do.’ I think there are too many political things going on behind-the-scenes,” Williams said. “I wasn’t really close enough with the team for that amount of time so I can’t really talk, or give too much information, because I don’t really know about what happened.

“Obviously I spoke to the boys when I was in Portugal. Everybody has a different view. I heard from a few people that they tried to ‘market the MLS’ a bit more, in the [World Cup] qualifying games and get a name for the MLS. At the end of the day it shouldn’t be about that. It should be about quality and bringing the best players and having a plan. That is it. It is not only the U.S. that failed. Holland failed. Italy. Chile. This is unbelievable. Something is obviously going wrong because other smaller nations, they are speeding up their process. When I look at Iceland, they are a small country but they are actually playing at the World Cup.” 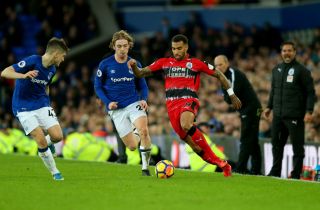 As his star continues to rise in the Premier League with Huddersfield, Williams will no doubt become an increasingly important figure as the USMNT rebuild from a monumental failure.

He hopes other talented young American players follow in the footsteps of Pulisic, McKennie and Co. to test themselves among the best leagues on the planet.

“It is very important that you don’t lose the focus because at the end of the day the USA is such a big country with so many great athletes, there is so much potential,” Williams said. “When I see the young boys I played with against Portugal, I am sure there are more out there who are hungry and happy to learn and make the step to Europe to get out of their comfort zone and be successful. That is what it needs and what it takes.”