TAM has become a great discussion in Major League Soccer, allowing teams to acquire more top-caliber players, but it appears in one instance the mechanism could actually hurt a player’s chances of being re-signed.

Pro Soccer Talk has learned through an MLS league source familiar with the situation that the LA Galaxy had a deal in place to acquire Vancouver Whitecaps goalkeeper David Ousted using Targeted Allocation Money (TAM), however, the league rejected that offer.

The 32-year-old took to Twitter on Friday, stating that a total of three teams offered him a contract using TAM, however, none of them were able to be executed.

It was announced back on Nov. 7 that Ousted would not return to the Whitecaps for the 2018 season, after spending nearly four-and-a-half years with the Canadian side.

1. Due to «blacklist of players» TAM rules in MLS, I have not been able to agree to terms with 3 teams offering me my option year salary by using TAM.

2. For this reason, I have been forced to opt out of Re-Entry Draft today as no team can actually enforce my option unless they go over budget and gamble. #ontheblacklist
#MLS #PlayerUnion?

I got told last night that I wasn’t allowed to be TAM player. Hoping @MLS will release the list of players not eligible to be TAM, so players can know the conditions they’re entertaining the re-entry draft on. #blacklist #mls #playersunion #transparency

Additionally, Ousted was scheduled to be one of the players eligible to be selected in Friday’s MLS Stage 1 Re-Entry Draft, but he has since been “forced to opt out.”

There are several ways a player can qualify to participate in the first stage of the Re-Entry Draft, and with Ousted having played over three MLS seasons and being over the age of 23, that previously ruled him eligible.

Under MLS’ current TAM rules and regulations, Ousted would have had to have been making at least $480,625 in 2017 in order for the veteran goalkeeper to qualify for a TAM offer.

That number is scheduled to increase for the next season, with the maximum budget charge set at $504,375 in 2018.

In order for an MLS club to sign Ousted at this stage would require them to go above and beyond his option for next season, which as the goalkeeper states in his second tweet would be a “gamble.”

Below are the ways MLS has declared it possible for clubs to use TAM in order to sign or re-sign players. 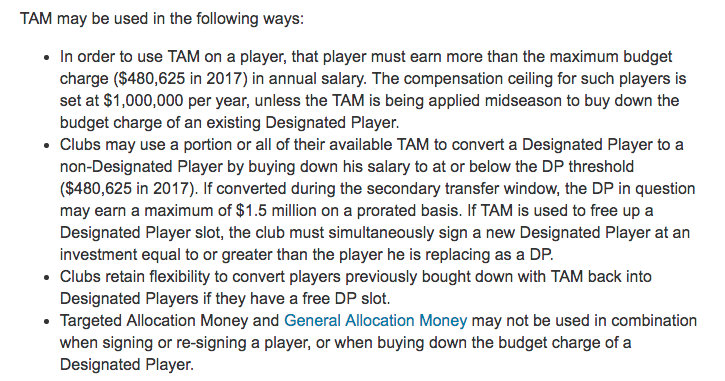