It’s a new year, and that means a fresh start for Giovano Dos Santos.

2017 was a trying year for the 28-year-old. In his second full season with the LA Galaxy, the Mexican star battled injuries and poor form as his MVP-level production from 2016 dropped to scoring just six goals to go with three assists (he had 15 goals and 13 assists in 2016).

There were some worried that Dos Santos, and his brother Jonathan, a holding midfielder for the Galaxy, would drop in form so far that they wouldn’t be able to make as much of an impact with the Mexican National Team.

But after some time off during the winter, Giovani Dos Santos appears fresh and ready to go with a re-vamped LA Galaxy side and for the green, red and white of El Tri.

“I feel we have a really strong team this year,” Dos Santos told PST as part of the Pepsi Generations global soccer campaign. “We’ve been training together for almost two months already, I think the chemistry between everyone is getting better every single day. As a Galaxy player, we know the responsibility and expectations are always high for this team.”

Last season, the Galaxy missed the playoffs for the first time in nearly a decade as the team couldn’t overcome a rash of both long-term and short-term injuries. Robbie Rogers and Sebastian Lleget missed nearly the entire season, while the likes of Dos Santos, Baggio Husidic, Gyasi Zardes, and Daniel Steres all missed significant time due to injuries.

Sigi Schmid was brought in midway through the season but even he couldn’t keep the Galaxy in the playoff picture.

“It’s difficult to explain what happened last year,” Dos Santos said. “Of course expectations are always high for us but I think it was a learning year for everyone. The past is in the past, we learn from it and we’re ready to take over this year.”

With the new year comes a lot of new faces, as well as others returning from injury. The Galaxy signed Giovani’s brother Jonathan last summer and then over the offseason they rebuilt the team’s spine, signing goalkeeper David Bingham, midfielder Perry Kitchen and striker Ola Kamara to go with other role players.

Those moves paid dividends in the first week of the MLS season, with the Galaxy knocking off the Portland Timbers 2-1.

Dos Santos called it a “dream” to be playing again at the club level with his brother, as the pair did together in the Barcelona youth ranks and at Villarreal.

“It’s been incredible to be together with my brother again, to share a moments together in our careers and our lives,” Dos Santos said, noting Jonathan lives with him in Los Angeles. “It’s our dream to be together so we feel blessed to be together again.”

The pair will be spending plenty of time this year together on and off the field, not only in the Galaxy shirt but also the green, white and red of Mexico.

In the prime of his career, assuming he stays healthy, Dos Santos will be expected to make a massive impact for Mexico at the 2018 World Cup in Russia, with El Tri opening up against defending World Cup champion Germany before taking on South Korea and Sweden.

Expectations are sky high for El Tri this summer, with a crop of players who won FIFA youth tournaments in the past finally coming into their prime as well as a number of high-profile players excelling overseas. While Dos Santos has ventured back to North America, the likes of Carlos Salcedo, Hrving “Chucky” Lozano and Jesus “Tecatito” Corona are beginning their European journeys and are expected to help bring Mexico over the fifth-game wall it’s failed to overcome in the past.

Amazingly, despite all the success of El Tri in CONCACAF and even on the world stage, Mexico has never made it past the quarterfinals.

“I think we have great players and a great squad,” Dos Santos added. “This is the most important year for the national team, we have the World Cup coming and I’m so excited for it.”

Although he’s left his European career behind for the project of winning a title in MLS, Dos Santos still keeps his eye on his former club in the Premier League, Tottenham, as well as a coach who he never worked with directly but knew from his time in Barcelona.

With the eight-hour time difference between London and Los Angeles, Dos Santos can’t watch many games live, but he said when he gets a chance, he tunes in to the Premier League. He said he’s been particularly impressed with Manchester City this year.

“I was in the first team when he was there,” Dos Santos said, referring to Manchester City boss Pep Guardiola. “I think he’s a great coach and he deserves all the success he’s having now.”

“I’m really excited to be in this campaign with such an iconic brand like Pepsi around the world and to be able to be alongside with such great players like Messi, Marcelo and Kroos is a blessing,” Dos Santos said. 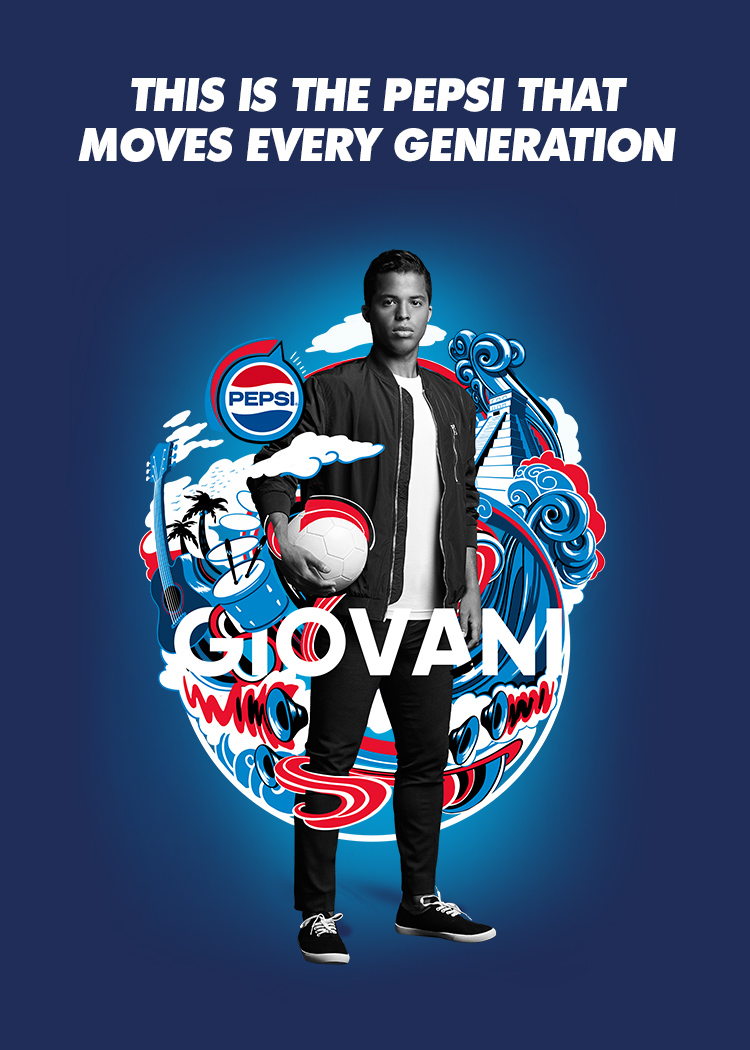