The Major League Soccer Players’ Union released the salaries of each player in the league as of May 1, 2018 on Thursday.

It is time to have a good old nose around the list, with the minimum salaries at $54,500 and five of the big boys earning over $6 million per year.

With plenty more cash floating around the league thanks to the introduction of Targeted Allocation Money (TAM) and General Allocation Money (GAM), there is plenty of chatter among MLS circles about a large number of players arriving from overseas leagues at a younger age in the past 12 months and those players getting paid big bucks compared to some domestic players in similar positions.

Below is a look at the top 10 best-paid players in MLS this season, based on total compensation. 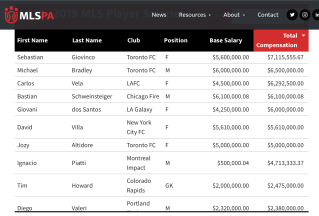