Auditors KPMG released its ranking of the most valuable clubs in Europe over the past year and the Premier League once again dominated with six teams in the top 10 and Manchester United leading the way ahead of Real Madrid and Barcelona.

Overall, the key stats to emerge from KPMG’s study is that there’s an aggregate growth of 14 percent among the top 32 clubs in Europe. While the English clubs in the top 32 list account for a staggering 42 percent of the total value, while Lyon, Sevilla and Tottenham are the big climbers in the list.

The top 14 clubs remain in the same positions as last season, but there is plenty of movement after that.

Manchester City are fourth, while Arsenal are in fifth, Chelsea in sixth, Liverpool in seventh and Tottenham stay in the top 10 as their progression on and off the pitch continues.

Leicester City are in 15th, West Ham United are newcomers to the list with the Hammers in 16th as their move to the London Stadium has increased their value substantially, while Everton are in 19th as nine of the most valuable 19 clubs in Europe are from the PL.

Below is a look at the top 32 via KPMG, while you can read the report in full here. 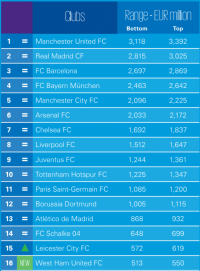 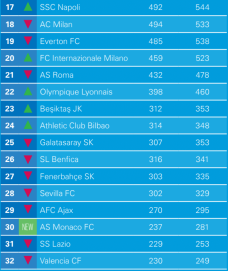