Both displayed a bird hand signal as they celebrated scoring goals, and considering their pre-match comments, post-match social media posts, and ethnic backgrounds, those were clearly meant to represent the double-eagle symbol in the middle of the Albanian flag.

This is a complicated political scenario, but it could be considered by FIFA to be politically provocative. Shaqiri is Albanian, born in Kosovo before moving to Switzerland with his parents and three siblings when he was just a year old. Kosovo declared its independence from Serbia in 2008 and is not recognized as a sovereign nation by Serbia. Xhaka is of Albanian descent, and his father previously participated in a demonstration against the communist Yugoslavian rule in Kosovo that landed him a lengthy jail sentence. Albania and Serbia have a particularly tumultuous relationship, with their leaders meeting for the first time in over 60 years in 2014, which caused tempers to flare. 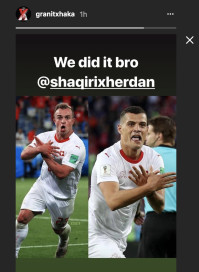 Following the match, Xhaka posted a picture of his celebration on his Instagram story, with the caption in Albanian roughly translated to, “Here you go Serbia, this is why they call me Granit Kosovo!” He deleted the post, and replaced it with an image of his celebration side-by-side with Shaqiri’s, with the slightly more cryptic caption, “We did it, bro!” in English.

Switzerland captain and new Arsenal signing Stephan Lichtsteiner came to the defense of his two teammates after the match. When asked about the celebrations, he said to Goal.com, “We had a lot of pressure, it was not an easy game for us. We have a lot of Albanians, so there is a lot of history between Serbia and Albania. It was a very tough game for them mentally.”

“It was good. Why not? This is the history for them,” Lichtsteiner continued. “The war between them was so difficult. I spoke to the father of one of our players who is Albanian, and he told me about this history. This is more than football. This is more than football because they have this period, this war that gave them both big problems. I understand them. I think it’s normal, it’s part of their life. There was also big provocation ahead of the game from them [Serbia], so I think it’s normal.”

Shaqiri could be in especially hot water. The Stoke City midfielder wore boots with the flags of Switzerland and Kosovo. He has made it clear in the past that he values his roots, saying, “I was born in Kosovo, but I grew up in Switzerland. I live both mentalities, it’s not a big difference.”

Switzerland finishes its World Cup group stage round with a match against Costa Rica on Wednesday in which a win would secure a spot in the knockout stage.