There will still be some Premier League fixture arrangements depending on the FA Cup, but the stretch run of the Top Four race is in focus Monday ahead of the last match of Week 25, with leaders Liverpool visiting West Ham United (Watch live at 3 p.m. ET Monday on NBCSN and online via NBCSports.com).

I received some consternation from Liverpool supporters a few weeks back when I said the club’s fixture list combines with its limited cup competition schedule to allow for a very forgiving run toward the club’s first domestic league title of the Premier League era.

In other words, Liverpool’s only non-title outcome other than a massive injury crisis would not just require Man City or Spurs going unbeaten, but the Reds proffering a genuine choke job as well.

Liverpool’s depth was unable to lead it out of its first FA Cup match at Wolves, and the Reds depth and subs couldn’t deal with Chelsea’s depth and subs in the League Cup.

The result is plenty of time to regroup and plan tactically, and even a prolonged UEFA Champions League run would keep the Reds clear of the UCL butting up against a big challenge in the league. And that singular match would likely come with Liverpool having a day or two more rest than likely UEL participant Chelsea.

What about the other teams, you say? Man City and Chelsea are alive in three other tournaments including this month’s League Cup Final, while Manchester United is alive in two (the Red Devils and Blues will meet in the FA Cup on Feb. 16). Arsenal and Spurs only have UEL and UCL action, respectively.

Feel free to print out the below spreadsheet and mark it up with points. How do they finish 1-6 in the Premier League? 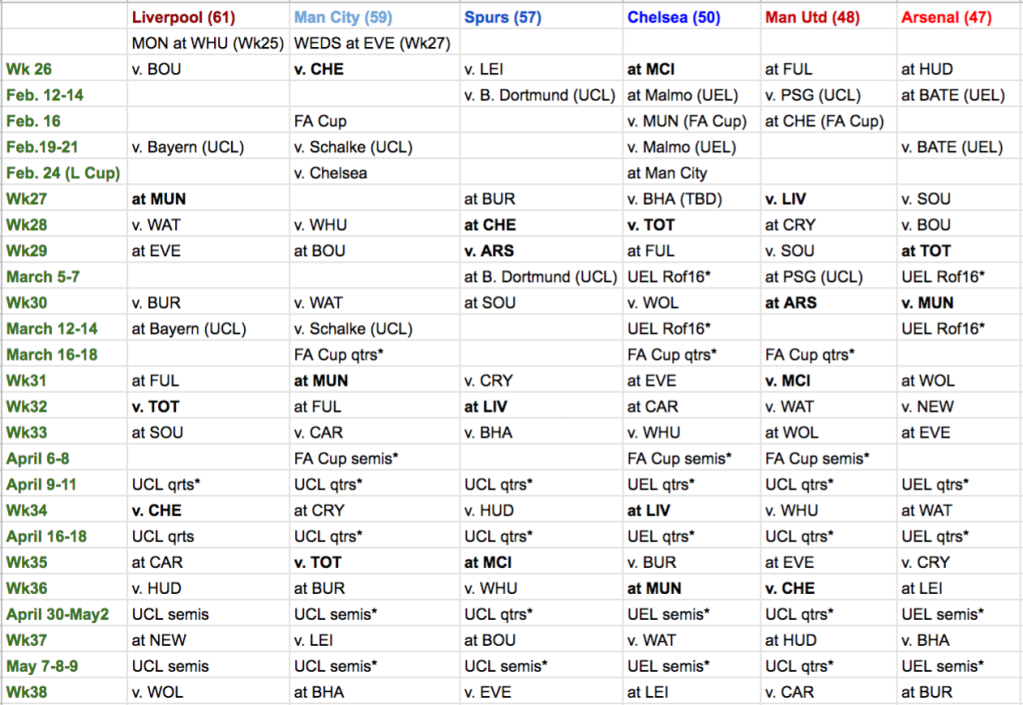