The Premier League Player of the Year is missing its easy winner this go-round.

There’s no Mohamed Salah running away with the scoring record, no Eden Hazard or N'Golo Kante as the clear best player on the champion.

So let’s take a look at where the race stands heading into the final international break of the season.

Virgil Van Dijk, Liverpool: Like N’Golo Kante before him, there’s a massive underdog status to a non-striker winning the Premier League’s Player of the Year (and you might want to argue that Kante deserved a Ballon d’Or finalist position). Flub against Fulham aside, few Premier League defenders have made their case in the past as well as Van Dijk has this season. Due to his status on a team who has a lot of the ball, it’s difficult to find super gaudy defensive numbers to make his case. Still, when taking into account Premier League center backs to play more than half their teams’ matches this season, no one on advanced stats site WhoScored is close to VVD. He also doesn’t have a “times dribbled past” per-match average on the site. 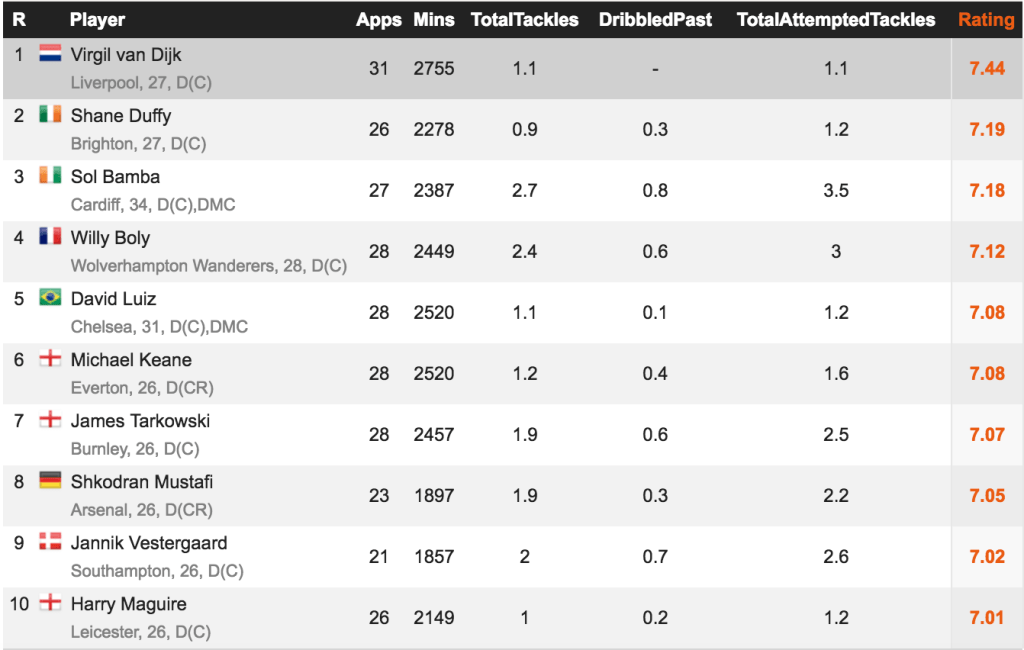 Eden Hazard, Chelsea: For years, Chelsea has gone as Eden Hazard. The Belgian is unquestionably one of the most talented players in the world, and is effervescent in attack. Sure, Chelsea’s also suffered through periods of head-scratching results and effort — nothing new at Stamford Bridge and he’s one of the only players to be a part of the downfalls of Jose Mourinho, Antonio Conte, and presumably Maurizio Sarri — but his 13 goals and 11 assists make him the only player to reach double figures in both categories this season. And imagine how high that assist total could be with Alvaro Morata or Gonzalo Higuain finishing at an average or above-average clip.

Raheem Sterling, Man City: At Liverpool a few years ago, it would’ve been accurate to call Sterling, “the kid with the abysmal second touch.” But the Englishman has become better and better by the season, and he’s actually the most economical star in the running for the PL’s Golden Boot; His 2.1 shots per game is less than Sergio Aguero (3.7), Mohamed Salah (3.4), Harry Kane (3.6), Pierre-Emerick Aubameyang (2.6), Hazard (2.6), and Sadio Mane (2.4). Only Hazard and Bournemouth’s Ryan Fraser have more assists.

Mohamed Salah, Liverpool: His average second-half of the season is going to make it difficult for him to repeat as PL Player of the Year, especially considering he has just one goal with no assists in eight matches since Jan. 30 (and four of those were 0-0 or 1-1 draws). Yet it’d be wrong to discount his 17 goals and six assists through 24 matches, and a strong finish could make him a Golden Boot, Premier League, and Champions League winner. That’s not crazy.

Sergio Aguero, Manchester City: Eighteen goals and six assists make him one of four players to combine for 24 goals of production this season, and the 30-year-old may be get sympathetic votes given his surprising lack of honors during a torrential tenure in the Premier League. His three hat tricks should live in the memory of some voters, too, especially since two came against Arsenal and Chelsea. He’s there when you need him, that’s for sure.

Harry Kane, Tottenham Hotspur: Right in the Golden Boot race despite missing four matches with torn ankle ligaments, Kane has 17 goals and four assists for Spurs this season. Not that the League Cup should come into play in a PL season vote, but Spurs’ star could well be holding silverware in voters’ minds if he hadn’t been hurt before the second leg against Chelsea. Three matches against Pep Guardiola and Man City in the next few weeks will either help or hurt his argument (again, only one of those comes in league play).

FINALLY, “THE WILD CARD” — He’s not going to win this award, and probably won’t be on any short lists besides this post, but spare a though for Raul Jimenez of Wolves. The Mexican striker has been a part of 18 league markers for Nuno Espirito Santo (12 goals, six assists) during his first ever Premier League season.

He’s scored against Chelsea twice, Spurs twice, and assisted versus Manchester United, and Arsenal. Wolves are 10W-4D-2L when he gets a goal or an assist, and 2W-3D-9L when he doesn’t produce magic.

And let’s be honest: Is one of the key players above leading their team to a title as impressive as what Jimenez has done keeping his newly-promoted side in the race for a Europa League place (even given what Wolves spent around him)?

Honestly, he’s in my Top Three with Sterling and Van Dijk. Hazard is probably fourth, with Kane, Aguero, and Salah a bit behind.