Manchester City manager Pep Guardiola remains adamant that his side is likely to fail in its bid to win either the Premier League, UEFA Champions League, or FA Cup.

“It’s almost impossible to win the quadruple,” he said. “Surviving is a miracle and it’s nice to be there.”

Is that so, or just a big dose of humility in the face of unprecedented success? In this instance, a lot of the former with perhaps a bit of the latter.

Let’s start here: Believe it or not, fortune has not been on City’s side in the Premier League.

In an alternate reality that played by the rules of probability and not humanity, Manchester City would have a four-point lead on the table with a match-in-hand, although admittedly the Ws and Ls associated with those xG totals are collective, and not tabulated by individual xG results.

NOTE: Defined by Opta, expected goals (xG) “measures the quality of a shot based on several variables such as assist type, shot angle and distance from goal, whether it was a headed shot and whether it was defined as a big chance.”

Instead, the reigning PL champs sit a point back of Liverpool with that match-in-hand looming April 24 at Old Trafford in the Manchester Derby.

And here’s the thing: Liverpool has been less fortunate than City since each played 20 matches and the Reds had a 7-point lead on the table, conceding three more goals than expected by the model (The green numbers show how many times goal-luck has smiled on a side, the red the opposite).

Man City should collect at least two trophies this year with the Cup double, though there’s certainly an argument to be made that non-cumulative titles and one-off results which can crumble due to one decision over 90 minutes are dicier than, say, a league title.

But City will be the prohibitive favorites on May 18 whether it plays Wolves or Watford, and will still have two weeks to go if it manages to qualify for the UCL Final in Madrid.

City’s challenge of winning a pair of two-legged ties, one against Spurs and another against either Ajax and Juventus, seem about the same.

And the final would be one of Liverpool, Porto, Manchester United, or Barcelona.

Starting at Spurs is a big help, as Pep Guardiola — and yes, by extension, another fine tactician in Mauricio Pochettino — will know whether he has an away goals advantage after one leg.

City has won three-straight against Spurs after Pochettino claimed four of six points in Guardiola’s first PL season. And the challenge versus Spurs will roll into our final obstacle.

[ MORE: 3 things we learned from Saints-Liverpool ]

1. The Premier League (and schedule congestion)

First things first, City and Liverpool are far-and-away the two deepest teams in the Premier League, and most would agree that the reigning champs are a bit deeper.

Plus, City won the thing last season and doesn’t have the specter of having never won the Premier League looming over it (Something which, while not exactly scientific, is a clear mental issue and evident to anyone who has ever played a team sport). 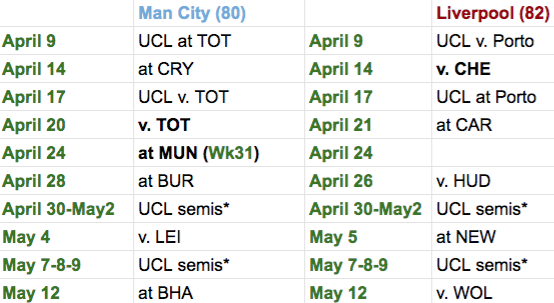 Liverpool’s defeat of Bayern Munich in the Champions League gave City more room for error in the PL title fight, as the Reds will now have to contend with two matches against Porto around next Sunday’s visit from Chelsea.

And should both advance, Liverpool has the advantage of sandwiching its semifinal around Newcastle (albeit at St. James’ Park) while Man City gets a visit from a more capable Leicester City.

The depth of City should be an advantage in the case of meeting Spurs three times in 12 days, especially with the last two at home, but to follow-up that match with a trip to Manchester United in a fierce derby gives Guardiola’s men four huge matches in a five-match, 16-day stretch.

It’s just difficult to believe that the congestion won’t cost City a win somewhere, and if that’s in the UCL it could cost them their bid for a title. If it’s in the league, then it would need Liverpool to draw or lose at least once. That part is trickier to imagine given the Reds really do seem primed to get past their second murky form stretch of the season and knock-on for the final stretch.