Ask yourself: Who is the most divisive player in the Premier League?

Even if you hadn’t already seen the headline of this article, one name would undoubtedly come to your mind before all others. Paul Pogba.

The moment Pogba arrived at Old Trafford from Juventus for a then-world record transfer fee, the toothpaste was out of the tube, never to find its way back inside. The takes came flying from all angles, blanketing social media, and producing foam at the mouths of television pundits and analysts. Those have yet to cease or even slow, with every single performance somehow stoking the flames on both sides of the debate.

Is Pogba a flop, or is he a world-class player stuck in a mediocre squad bringing him down?

To even begin answering that without spitting hot fire, we first must figure out how to fairly evaluate the performances of such a discordant presence as the 26-year-old Frenchman. Before we analyze what standards are fair and what are not, let’s look at a snapshot of the fire takes that television and social media spewed after the 2-0 loss at the hands of title favorites Manchester City.

Paul Pogba in PFA team of the year. Seriously ?

The agenda against Paul Pogba today from ManUtd fans is a joke. Without him we’d be fighting for 10th place. 21 goal contributions in the league this season. The most of any center midfielder in Europe

Put some respect on his name #MUFC pic.twitter.com/tRCSpBfrEv

🗣 – "I don't think he wants to be here." @GNev2 says "world-class" Paul Pogba could become a "massive problem" for @ManUtd if the player has had his head turned. 👀

Phew. Take a breather, you earned it. Not easy to navigate the minefield. Now that you’ve safely made it here, let’s look at this introspectively – what are the standards by which we should judge Paul Pogba? For a player who has won a World Cup, 4 Scudettos, a Europa League, and an EFL Cup plus reached a Champions League final, there’s a lot of negativity out there.

Naturally, the first and easiest (laziest?) standard to mention for any non-defender is goals. Ultimately, it seems harsh to judge a central midfielder by his goals tally, but Pogba has scored 52 league goals in his career plus another 54 assists, a stunning amount for a player who doesn’t have the same attacking responsibilities as other attacking midfielders like Kevin De Bruyne, David Silva, or Gylfi Sigurdsson.

But is Pogba even a central midfielder? Is he better in a more of an attacking role, and therefore goals and assists should be expected? To judge Pogba fairly, it’s prudent to determine his best position, but if two Red Devil managers can’t even seem to do that, how are we meant to even begin solving that predicament? Pogba has improved his xG per shot value significantly each year at Manchester United, moving from a paltry 0.07 his first season to 0.10 and now 0.16, suggesting he is moving further forward into better attacking positions as his Manchester United career progresses. Whether that reflects an improvement as a player or a change in position is up for debate.

Jose Mourinho infamously locked Pogba into a deeper, more shackled role his first season at United, and while it understandably limited the electricity Pogba was able to provide, he actually performed quite well in the role. Pogba scored just five goals and assisted four, but he completed 1.8 tackles per 90 minutes, recorded 1.0 interceptions per 90, and cleared the ball 1.4 times that season, all highs for his time at Manchester United. This season, those numbers are down to 1.3 tackles, 0.5 interceptions, and 1.0 clears. Interestingly enough, all Pogba’s Manchester United defensive numbers are lower than when he was at Juventus, likely a product of both a more central role and a more defensive league in Serie A.

So should Manchester United build its formation with the 26-year-old as its focal point? Pogba excelled at Juventus in the spotlight, and despite fewer passes completed per 90 minutes (48.5 per 90 his last season with Juventus, lower than any year at Manchester United), he still managed the same amount of key passes at around 1.5 per 90 minutes, more efficient in Italy than he has been in England. Despite higher passing numbers, Pogba has a less visible role at Manchester United next to other midfielders like Nemanja Matic, Ander Herrera, and Fred, and that could affect his perceptive contribution. He also has less adept defensive talent, with guys like Claudio Marchisio, Sami Khedira, Stefano Sturaro, Giorginio Chiellini, and Leonardo Bonucci to lean on through the middle at his previous stop, allowing him more freedom to venture forward without worrying about what happens behind him.

Against Manchester City, Pogba was given a heavy role in attacking build-up play, finishing with a team-high in shots and attacking-third passes. And yet…he didn’t really do THAT much. 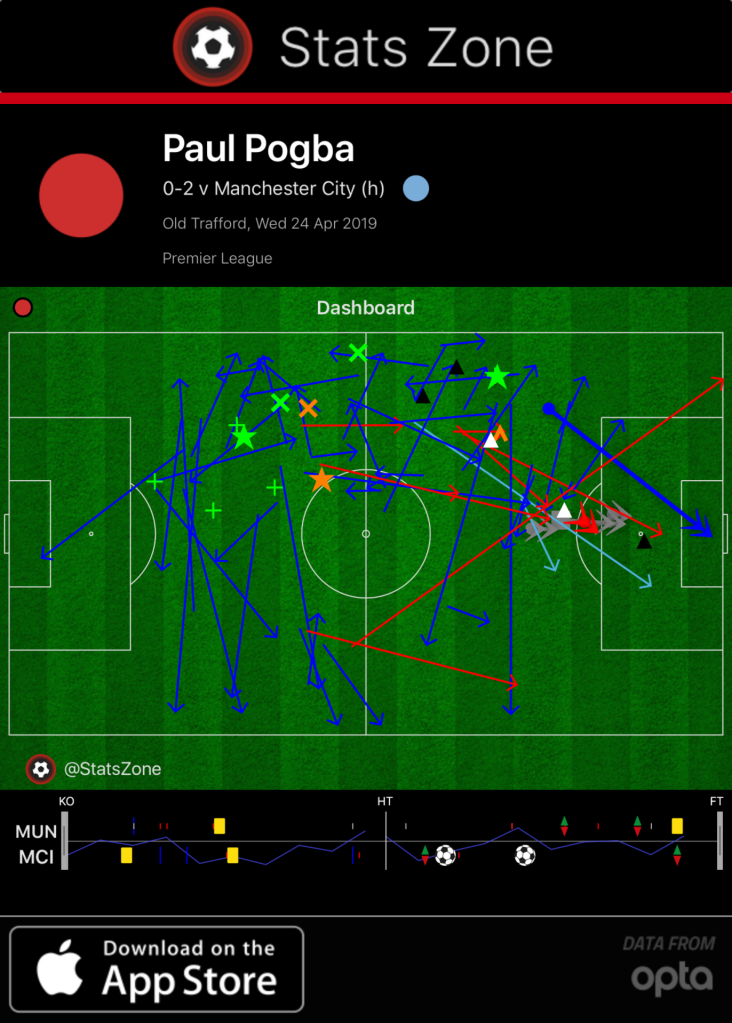 Two chances created is good, and he contributed a bit defensively with two tackles, but it still feels a bit static. Still, that’s not all his fault. With Fred next to him struggling mightily to cover the back line, Pogba was unable to truly be a force carrying the ball forward and dishing to teammates. This begs the question, is Pogba not good enough to carry a team, or does he have too much on his shoulders?

Given Pogba’s fluid positional role, we move to the other heavy debate regarding the Frenchman – club vs. country. Many criticize Pogba for playing better for Les Blues than for Manchester United, but is it fair to compare the two? In his 2018 World Cup run, Pogba excelled, both as a locker room presence and an on-field star. Still, many believed that France won the tournament without playing to its full potential, at times looking lethargic and overly compact. If he has different roles between the two, it becomes more difficult to directly compare the performances.

That begs the question…is that what Pogba’s game has become? Contribute with fewer flashy moments but doing the dirty work, playing a possessional style of midfield role that racks up the short passes and excels at positioning but with less noticeable moments? One tool in Pogba’s arsenal that has stayed consistent throughout his entire career is his ability to ping a long-ball, a skill he gets very little credit for publicly. This was on display against Manchester City, dropping a dime to a streaking Jesse Lingard at the far post in the 16th minute, one which Lingard somehow missed with an off-balance one-touch shot to the far corner.

Pogba’s long-ball rate is among the best in the Premier League for outfield players, with his 4.7 per 90 rate good for third among midfielders, with only Ruben Neves and Granit Xhaka owning a better mark. He was 7/9 on long balls against Manchester City, and while many of those were switches of play, Pogba’s long-distance ability is a weapon from anywhere on the pitch.

It’s impossible to deny that Pogba is no longer the flashy superstar he was at Juventus, and part of analyzing his contributions on the field now is to determine why that is. Has he really fallen off the table, or is he just a different player now? If he’s different, how is he different and is it for better, for worse, or both?

Feeding the narrative is the team’s inability to perform in big games over the course of his Manchester United career. This season, Manchester United has beaten up on the lower teams in the table, but they’ve come up empty against rivals. The club has scored just two goals in its last five matches against top five sides, and aside from 2-2 draws with Chelsea and Arsenal, Manchester United has failed to score more than one goal in any match against a top five side this season. Pogba has failed to score any of his 13 goals this season against top five sides, and has just one assist in those matches, feeding the Rashford winner against Spurs (another long-ball gem).

Still, compared to most other similar players, Pogba outclasses them all on the statistical attacking radar. A similar player in Sergej Milinkovic-Savic? Close, but no. Wolves breakout star Ruben Neves? Again, almost there, but lacking the goalscoring and the consistency. Same with Belgian youngster Youri Tielemans. How about a more attacking player in Felipe Anderson? Not there yet. Potential replacement Adrien Rabiot? Only the attacking monstrosity in PSG boosts the buildup numbers, but the direct offensive contribution isn’t in the same zip code. One man attacking wizard Wilfried Zaha? Somehow still not meeting Pogba’s level. You have to elevate to an attacking midfielder of Christian Eriksen’s level to find a match.

And yet, some will say – with validity – shouldn’t Pogba be expected to maintain a class of his own given the price Manchester United paid? And we’re back to square one.

So, with all this in mind…is there a conclusion on Paul Pogba here? That wasn’t the point. The above was just meant to guide you on your journey to your own hot take. Was Pogba worth his price? Has Pogba regressed since moving to Old Trafford, or has he simply adapted? Should United consider replacing him with a player on lower wages? These are all valid questions that still need answering, but there’s likely more to come on those fronts as well.

Ultimately, a hot-button player like Pogba will produce piles of debate material, but before any takes can be reasonably digested, it is prudent to ponder how to evaluate a player of his caliber and skill set, and what values on the field are more significant towards his contribution than others. None of this information is relevant if a decision can’t be made on what we want from the Frenchman. There’s no question, however, that Manchester United still has a long way to go to reach the heights of old, and whether Pogba is a player good enough at the right places to be a part of that potential revival is a valid debate.