Canada named its Gold Cup squad this week, but you didn’t need to check a list to know one name was included on coach John Herdman’s list: Alphonso Davies, the 18-year-old Bayern Munich youngster who scored his first Bundesliga goal this March.

The Canadian teen hasn’t necessarily been top of mind this side of the Atlantic since his transfer; He’s being brought along slowly by Bayern, and didn’t quite get the publicity worthy of his immense talent while with Vancouver in Major League Soccer, either.

So what should we expect from Davies at the Gold Cup, as the 18-year-old looks to build off a 3-goal performance at the 2017 edition which labeled him the youngest goal scorer in tournament history? Pro Soccer Talk asked the man perhaps most responsible for Davies’ development, former Whitecaps manager Carl Robinson, as part of a wide-ranging interview that touches on Davies, Tyler Adams, the future of MLS, and his desire to get back in a manager’s chair.

A former Norwich City, Toronto FC, and Welsh national team mainstay, Robinson is eight months removed from his first foray into management. From 2013-18 with Vancouver, Robinson led the ‘Caps to the MLS Cup Playoffs thrice, earning 50-plus points on all three occasions, and the CONCACAF Champions League semifinals once. He also became part of a select group to win the Canadian Championship as a player and as a manager.

PST: Let’s start here, how did you go about the development of Alphonso Davies with Vancouver?

Carl Robinson: “I used a plan that Arsene Wenger had with Aaron Ramsey, having known Aaron through the Wales set-up. When Aaron moved from Cardiff to Arsenal at age 17 for six million quid, he couldn’t understand why after every fourth game he got left out no matter how well he played. When he went to speak to the manager, the manager explained to him that this is what he’s done with young players, whether Cesc Fabregas or whomever.

“I used that, not letter of the law, but I used that plan with Alphonso. When I sensed a little drop off in training, I’d leave him out. People thought he should play every minute of every game, but I disagreed. I knew the fans wanted to see him as a wonder kid, but I knew the right plan for him. We tried to keep him away from the media, because he needed to concentrate on his football only. Looking back on it, it was the correct way of dealing with it and all credit to him for understanding.”

PST: At 16, he was being linked with Chelsea, Liverpool, reports even went as far as a reported trial with Manchester United. How did Bayern Munich become his destination two years later?

Robinson: “There were lots of rumors, but nothing ever concrete. The summer of 2018, everything went pretty quickly. A number of clubs explained their interest. Some were serious, some were very serious, and some weren’t serious because when a top club like Bayern Munich comes in, it alerts the other top clubs.

“Bayern did their homework. They watched the player, met the player, got references from people around him, then sat down with him and his representatives and laid down a five-year plan for him. In that plan was opportunities with first and second team, and that’s what people don’t understand with young players. It’s not just about what they do on a Saturday in front of 30,000 people. It’s what they do off the field. It’s what they do from Monday to Friday.

“When I saw the plan from Bayern Munich, and Alphonso saw it, it was an unbelievable opportunity for him. He’s been part of lifting two trophies but there’s still a lot left for his development. There are a lot of fantastic players in Bayern’s U-23 side who haven’t gotten a chance. He’ll have a fight on his hands but he’s got the right mentality to do it.” 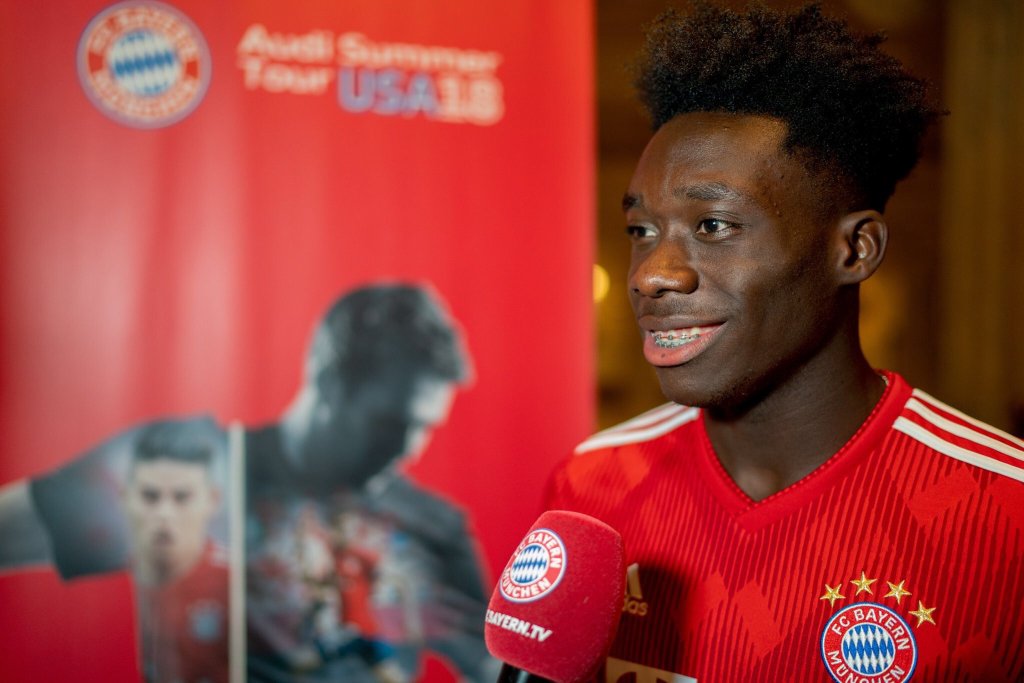 PST: It can be difficult for those of us in MLS or American soccer circles to get a gauge for what we should expect from our phenoms, from Landon Donovan to Christian Pulisic to Diego Lainez? What should we be looking for when it comes to Davies? What’s his ceiling?

Robinson: “How good is he? He has got the potential to be an exceptional player. He’s a very good player at the moment, but I’ve seen players with huge potential. Ravel Morrison with Manchester United, Tyler Adams with the Red Bulls. It can go different ways.

“Tyler was in the German Cup final, Alphonso wasn’t in the 18. Tyler’s more suited now because of his positional awareness. The key element for Alphonso is attacking players are judged on outputs, goals and assists. He’s not judged on he worked really hard. Midfield players we can talk about pass location, covering ground, how hard they work, because Tyler’s as good as there is in relation to that.

“Again, I don’t get carried away with saying he’s a superstar already. His football over there will make him a superstar. He’s still got a lot of work ahead of him but he has the mindset and mentality to get there for sure. Look at (Liverpool’s) Harry Wilson and (Chelsea’s) Mason Mount at Derby, there are high value players who are playing in the Championship, so he needs to find regular football. He might need to go on loan. He may break in with Robben and Ribery leaving.

“It’s going to take him some time to adjust, but there might be a bigger upside at the end of it if he can get himself into a rhythm, a groove, and play to a level in which I know he can get. Knowing the kid, and probably being a bit biased, he can make it. But there are also better players than him who have not reached their potential, so I think Bayern is a wonderful place for him.”

PST: MLS is a lot different then 2007, when you arrived from Norwich City and became TFC’s Player of the Season. What’s changed most? What’s your overall take on the league?

Robinson: “Back in 2007, there was a lot of hullaballoo with David Beckham arriving a week after I came over. Since then we’ve had Thierry Henry, Rafa Marquez, David Villa… The league has grown dramatically. The insertion of high level DPs has been important. It’s made people sit up and take notice. The addition of TAM money, even though it’s complicated and like Monopoly money, is increasing the quality over the squad.

“The way they’ve tried to build it slowly is correct. There still should be a big focus on development with the USL teams, which will help the Major League Soccer teams grow, and academies as well. It’s probably grown quicker than I thought it would, but now people don’t want to see it stagnate. That probably means more investment, and more TAM and more DPs. Given the new CBA, they have to figure out the way to do it right.” 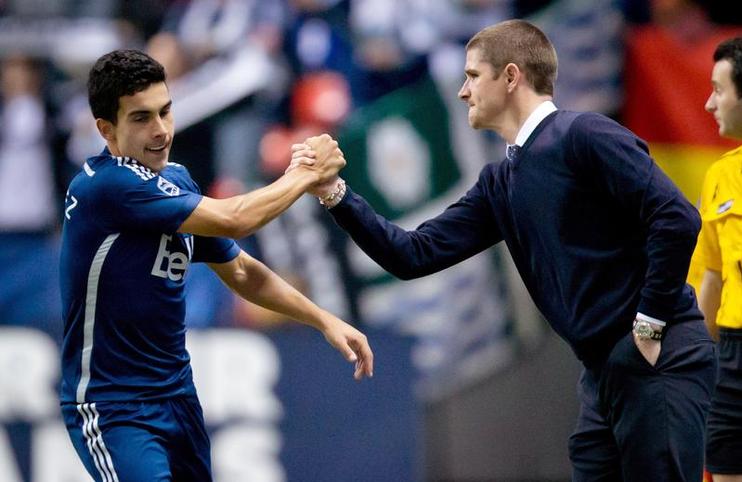 PST: So there’s no denying your debut foray into management was a success in Vancouver. For a club spending in the bottom half at best to be a regular threat to host home playoff games… that’s pretty decent. Your numbers compare with the bigger American names in coaching: Vermes, Berhalter, Vanney. What’s next?

Robinson: “I’ve taken a much needed break. I wanted to spend more time with my family. I have two children, ages 17 and 11, and I missed a lot of their growing up because the commitment of being a player, coach, and manager. This is 24-7. I needed that time with them.

“But I’m still watching more football and traveling everywhere. Learning is paramount and I’ve been able to do that more. Spending time with other managers has been refreshing and valuable. There are also some excellent people within MLS clubs that have been great with me. You earn respect and trust. 10 years over here has been great. I know MLS inside out now. Although rules are always changing… These things don’t change. I’ll start to look at opportunities I feel are right. There have a number of conversations I’ve had with a people and teams in different countries, but what I’ve said to my family is I’ll take the right opportunity, not any opportunity. Being a manager for five years and inside one club for seven you understand how it works, and what you need to be successful  I’m looking forward to wherever my next challenge. I’m in no rush but I know my passion is football.”

PST: One more odd note. Your playing resume reads like a list of teams who were playoff-bound or promoted this year: Norwich, Sheffield United, Sunderland, Portsmouth, Wolves. Do you still root for all of them? Any more than the others?

“I follow all my former teams. I have friends and respect for them all. I still follow Red Bulls, Toronto. Wolves staying in the PL is a great opportunity. Norwich & Sheffield United getting promoted, that’s brilliant. Sunderland, that’s heartache. I know the Mackem fans will be absolutely devastated. Portsmouth too. What you learn in football is taking nothing for granted although people have short memories. I genuinely believe where I’m at at the moment, there’s a reason. What I do next, there’s a reason.”