David Luiz is a lover.

He’s a man who enjoys the beautiful things in life and exploring all that the world has to offer. In the same way he marauds all over the pitch, Luiz is just as adventurous taking in new surroundings.

The way he plays reflects his personality. Courageous, full of energy and a little unpredictable. Chatting with him is both enjoyable and full of surprises.

Ahead of their trip to Sheffield United on Monday (Watch live, 3 p.m. ET on NBCSN and online via NBCSports.com) his attitude is very much: ‘Why not me? Why not us? Let’s do this!’

Over the international break Luiz, 32, traveled with his fiancee and mom to Rwanda, in partnership with Arsenal’s sponsor Visit Rwanda, as he visited the African country which has transformed itself over the past 25 years after it was torn apart by genocide in 1994.

Visiting the Kigali Genocide Memorial, Luiz was humbled as he paid his respects to the victims of the genocide against the Tutsi. He was in a reflective mood as he discussed the work Rwanda has done to get to this stage.

“After 25 years you can see how things have improved and how people have love for their country and you can feel love from the people,” Luiz said of Rwanda’s rebuild. “I am in love with this country and I will recommend Rwanda to all of my friends to take a trip, and I’m going to be here again, for sure.” 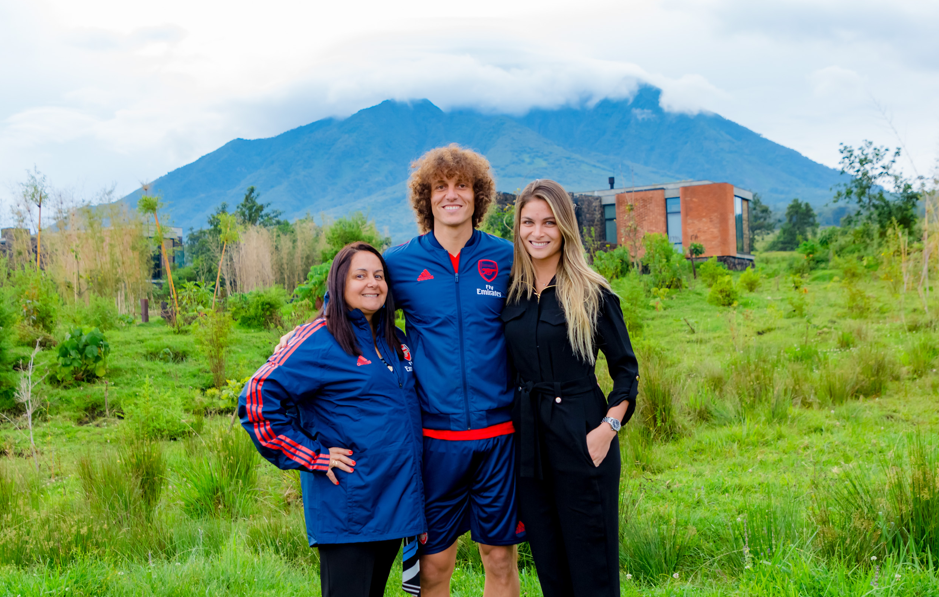 Luiz is a people person. There’s no other way to put it.

From leading celebrations with teammates during and after games, to sticking his head out of his car window as he drives through London to sign autographs and pose for photos, he just loves life.

During his time in the African country he also visited Volcanoes National Park and planted new indigenous trees as he was mesmerized by its beauty.

The boy from Brazil had never stepped foot in a jungle before, and he and his family got the chance to meet the endangered Mountain Gorillas up close in their natural habitat after a long trek through Rwanda’s jungles.

“I am Brazilian, but I never had the opportunity to walk in a real jungle!” Luiz said. “To see the gorillas so near with my family and experience the wildlife, the culture and do something completely different. It was amazing to see all of the gorillas with their babies, their families. It was incredible. For me it has been an emotional trip in a positive way.”

Luiz is an emotional, thoughtful person and his passion for not just football but life shines through when you chat to him. He has a keen interest in helping the environment in any way he can and wants to leave behind a better world.

What a great day in my life, just want to say thank you for all!! Get the opportunity to learn in @Singita_ about the conservation system and I really enjoyed it !!! ❤️❤️❤️ #oursingita pic.twitter.com/C7XzVPUD05

His summer arrival at Arsenal raised plenty of eyebrows and he has always been a bit of a wildcard, but his experience was supposed to gel the defensive unit together. It was a big deal for him to leave Chelsea, where he was expected to be a key player under Frank Lampard, but he is certainly glad he swapped London giants.

“I really love the spirit of the club. Everyone loves the club and loves to work at this club. I love people,” Luiz explained. “To see everyone who works in the kitchen, everyone who works on the pitch, they are all in love with the club. This is amazing because this is what I enjoy and I enjoy to be with these kind of people.”

The people at Arsenal aside, have the Gunners got the players to improve things defensively and finish back in the top four after a three-season hiatus?

Luiz bristles a little when asked if Arsenal can improve enough defensively to finish in the top four this season.

“We talk about this with every single club. Arsenal is no different,” Luiz said. “I think Unai is working very well with the plan to defend and then the plan to attack. I always say, defending starts with the strikers and through the whole team, and you can see with modern football that the goalkeeper is now like a No. 6. We are going to try and improve, we are already doing well and the last few games have showed that we are stronger in a defensive way. I want this club to improve in every part of the game.”

Luiz’s game has evolved over the years. His marauding runs from center back aren’t as often as they once were but that doesn’t mean his swashbuckling style has disappeared forever.

We have already seen Luiz take chances on the ball and bring his Brazilian flair to Arsenal’s defense, especially on the ball with goalkeeper Bernd Leno. Is Luiz, the oldest player in Arsenal’s squad, going to change his game now?

“It is the same. But this year my game depends on the team. I have to be someone who can adapt in a quality way, especially because I am a specialty player,” Luiz said. “You have to feel the moment. We need to play games, we need to win trophies. Everything was good where I was at clubs winning titles, so I can’t think in a different way. I want to win titles with Arsenal. I want to improve and adapt myself for the style of Arsenal, as a club and how the manager wants us to play. I think we can do that together.”

Luiz has settled in very quickly at Arsenal.

He is popular with his teammates and  scored the winning goal last time out in the Premier League, a deft header as the Gunners edged past Bournemouth 1-0.

“I’ve had a good relationship with players at all of the clubs, big clubs, I’ve been at during my career. I’m trying to do what I’ve done everywhere. I am working hard to improve myself and the team to have the ambition to win titles. I think this club deserves to shine again,” Luiz said. “We have an amazing team, amazing coaching staff, I think we can have this ambition and this as a goal. And then to achieve these kind of things you need to work hard.”

The hard work never stops for Luiz. He comes across as a professional, humble man, even if his lively demeanor on the pitch and off it can be misconstrued as overconfidence.

When asked if Arsenal can win the Premier League title this season, Luiz’s tone changed from being the fun-loving, mercurial defender we all know to being all business.

He wants it with Arsenal and after starring in Chelsea’s surprise title win in 2016-17 under Antonio Conte, could he help the Gunners pull off an even bigger shock to launch a title push as extreme darkhorses this season?

“For me, if you start something, and we’ve just started the Premier League and all of the competitions, if you don’t think you can win the competition then you won’t start anything in your life,” Luiz said in a defiant manner. “The ambition has to be there, the dream has to be there. Also, you have to be humble and have the humility to understand how you can achieve this kind of thing. This is what you have to do every single day. To understand the plan, to work hard and understand that if you have the opportunity you have to give your best. After that, if you don’t achieve you have to understand why you didn’t achieve these kind of goals. But my vision, my ambition and my will is always to fight for the title. And between the club, the players and the coach, we have the possibility to fight for the title.”

Luiz is a many of many layers. He can be the joker, the thinker and the ultimate professional. All at the same time.

Arsenal will need him to be all of the above, and to be at his best on the pitch, if they’re going to seriously challenge Liverpool and Man City for the title this season. That may not happen, but with Chelsea, Man United and Tottenham all in transition, the Gunners all of a sudden seem to have the edge in the top four battle.

Luiz is up for the challenge and his distinguished career proves he will often prove you wrong and surprise you at the same time. 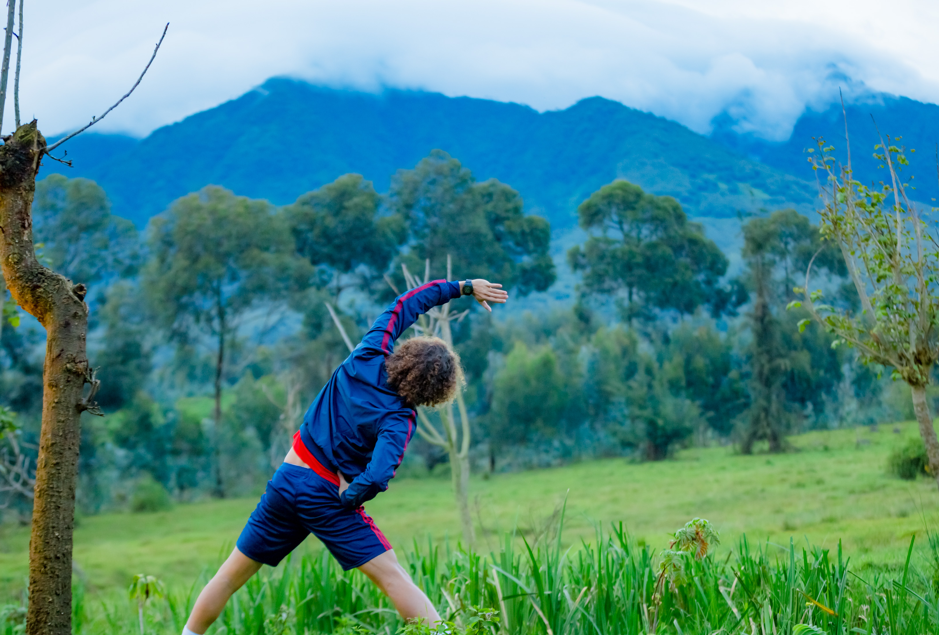 Just like in Rwanda, Luiz is eager to be a big part of the process and help the development and progress of Arsenal’s youngsters any way he can as they currently sit in third.

“I think we’ve started really well and we just lost one game in the Premier League. I think the team is improving and now we are in third in the table but we want to finish this season fighting for the title,” Luiz said. “This is our goal. I’m trying to my best for the team and for every single player and I’m so happy to be here with all of the talent we have in the club.

“Myself, as a senior play, I have over 600 games in my career, so I’m going to help the young players develop a lot and help the team… I think I’m continuing that role. I’ve been doing that the last few years already and to have the pleasure to do that. I’ve been doing that because it’s a pleasure and I like to see them enjoy improving and finding out the importance of how to play the game. I’ve played a lot of games in my career, and the only game I haven’t played in is the World Cup final, so I want to enjoy this as much as I can.”

Watching Luiz play is never boring, and Arsenal aren’t either.

In many ways this is a match made in heaven.