Jose Mourinho has a heck of a job on his hands to turn things around at Tottenham Hotspur, but the initial signs were encouraging in Spurs’ 3-2 win at West Ham on Saturday.

After that clash at the London Stadium I hosted a live video answering your questions (watch that back, here) and one of the questions was a belter: “Which Tottenham players have the most to prove?”

Simple answer: A lot of Tottenham’s players will be feeling guilty about their recent displays which ultimately led to Mauricio Pochettino and his staff losing their jobs.

A more detailed answer is that the trio of Christian Eriksen, Dele Alli and Lucas Moura have all struggled massively at different times and contributed to Pochettino’s dismissal, and an intriguing new player trading platform has the stats to back it up.

Via the team over at SportStack, this graphic below shows how the value of some of Tottenham’s most influential players have plummeted over the last 12 months.

How does it work? Players will earn and lose value during a match according to SportStack’s Scoring Table which gives a score of 0-100p per game based on pre-determined metrics including tackles won (+2p), shots on target (+5p), goals (+20p) and hitting the woodwork (+5). A pay out of the total amount will happen at the end of each match in line with the Scoring Table. 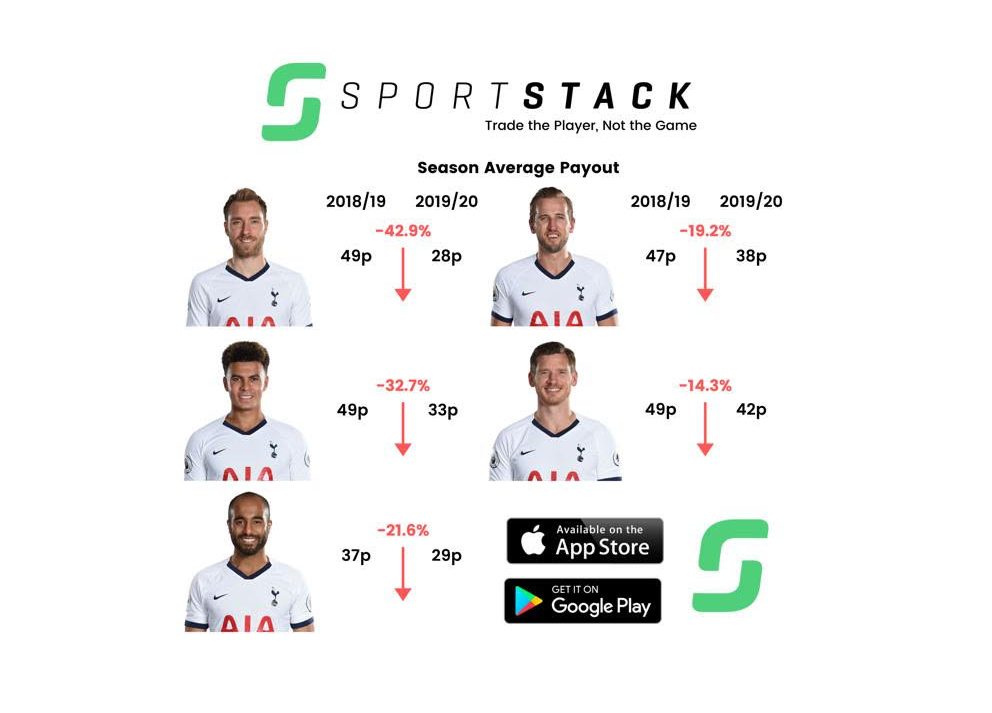 There’s no doubt that Mourinho got the most out of Kane, Alli and Moura at the weekend as Moura and Kane scored plus Alli played a key role in Tottenham’s first two goals.

And with both Christian Eriksen and Jan Vertonghen said to be on their way out with contracts ending in the summer, it is certainly damning that they have both seen their values fall considerably, according to SportStack. Harry Kane is also in there, which probably says more about the players around him not creating the chances for him to finish than it does about Kane’s displays.

Right now every Spurs player will feel like they have something to prove to Mourinho in the coming days, weeks and months, but the list of players above will feel even more responsibility to dig deep.

It is time for Dele Alli and Lucas Moura to stand tall on a regularly basis, while Vertonghen and Eriksen need to move on as quickly as possible if they aren’t going to sign new contracts.