We saw five goals in the Premier League’s morning opener, and the 10 a.m. ET kickoffs have had a bit less finish despite plenty of chances.

Here’s where we stand after 45 minutes of play in five cities around England.

Sergio Aguero has a pair of goals, the first assisted by Ilkay Gundogan and the second by West Brom. The goal was also a gorgeous 19-yarder, as City is prepared to easily end its six-match winless run.

Zlatan Ibrahimovic and Juan Mata are terrifying the visitors, but the big Swede has yet to finish one of many chances.

Even enough at the Riverside Stadium until Gaston Ramirez’s splendid individual work was enough to get the better of Artur Boruc.

"Relax guys, I got this." – Gaston Ramirez probably. #PLonNBC https://t.co/hYWSCUyxhk

Hornets are controlling the proceedings, and Younes Kaboul has clanged a header off the woodwork, but no goals yet.

Spurs holding the ball and the advantages in shots, and Vincent Janssen scored a penalty to open the scoring before halftime.

Sunderland’s opening day is up in flames, as Leicester City is romping in one of four Premier League matches at the half.

It’s not a bad day to be a Premier League new boy, with two sides geared up for a point and the other with some fine moments at home.

Suffice it to say this is not how Jeremain Lens and Dick Advocaat expected Sunderland’s season to start. Riyad Mahrez has a pair of goals as the Foxes scored thrice in 25 minutes to build a lead that’s likely to stand at King Power Stadium.

Not much to report from Vitality Stadium, where the Cherries are 45 minutes away from earning a point on their PL debut.

Set piece goals are the name of a pair of early games, as four Premier League matches dot the weekend landscape.

Leonardo Ulloa hammered a tidy low goal past Lukasz Fabianski off a set piece, and the Foxes have hope at rising out of the drop zone by the end of the weekend with a home lead against Swans.

Kevin Mirallas picked up flick of sorts from Arouna Kone to boost the home side into a 29th minute lead. A stoppage time second yellow to Ashley Barnes has the Clarets down to 10 men in addition to its deficit on the scoreboard.

Morgan Schneiderlin was assisted by Jose Fonte off a corner kick, as the Saints would be in fifth at the end of the day if they can hold on for the road win,

Brown Ideye made the early headlines with his return to the lineup, but it was James Morrison who zipped past Jason Puncheon to power a point blank headed home for a second minute lead. 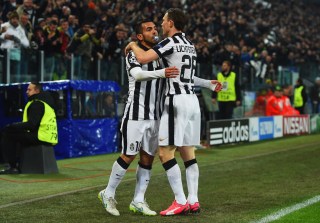 Manchester City has woken up after a sleepy, sloppy 15 minutes to start the game, but has not been able to find a way past Aston Villa goalkeeper Brad Guzan at Villa Park on NBC this Saturday afternoon.

It’s scoreless at the break, and this adequately sums up the first 15 minutes:

15 minutes gone and we’ve still had just 2 shots, both of which have been blocked. Wake up lads. pic.twitter.com/GzaNSxOywy

Manchester City started to find their attack in the next 10 minutes, though, and Aleksandar Kolavor’s brilliant cross was nearly headed into the upper 90 by Sergio Aguero. It sailed teasingly wide.

They kept knocking, but the last touch on their wonderful combinations was missing. Edin Dzeko sent one skyward in the 34th minute.

Former Villa attacked James Milner had a shot deflected out for a corner in the 45th minute, and the ensuing deadball was deflected wide after Kolarov found a low shot. Two more Villa clearances led to more corners, but the hosts held on for halftime.

Premier League at the half: Watford, Palace lead; Leicester unloading on Sunderland (Watch live) August 8, 2015 10:51 am