It was a good night to be a home fan in Major League Soccer, as four of the five hosting sides treated their supporters to wins and the fifth gave its crowd a pair of goals and a high-profile draw.

Here are the moments to remember:

The Galaxy scored a pair of real nice team goals, including the below beauty from Mike Magee, but Keegan Rosenberry’s first MLS goal earned Philly a point.

Dillon Serna’s low shot through traffic might’ve taken its time, but the Rapids increased their Western Conference lead to three points with another win over reeling KC.

Caleb Porter’s plan to have another subpar regular season, then turn it on late and win MLS Cup is on track. Woof.

The Quakes cruised in this one, but let’s take a moment to salute Ricardo Clark’s rip for Houston.

VANCOUVER, British Columbia (AP) The Whitecaps have acquired Blas Perez from FC Dallas, completing a trade that had been in the works while the veteran striker was in preseason camp with Vancouver.

Veteran midfielder Mauro Rosales is headed to Texas in the deal announced Tuesday. Perez agreed to a one-year contract with the Whitecaps.

Perez announced his departure from Dallas in December, writing to fans that he wanted to stay “but the board and technical staff have other plans.”

The 34-year-old Rosales has 13 goals and 48 assists in 142 MLS games with Seattle, Chivas USA and Vancouver.

The game in 100 words (or less): The Portland Timbers are headed to their first MLS Cup in club history after defeating FC Dallas, 5-3 on aggregate, in the Western Conference finals (2-2 draw in the second leg). Fanendo Adi scored in Sunday’s second leg, giving Caleb Porter’s side a 4-1 aggregate lead before Ryan Hollingshead and Blas Perez scored inside the last 25 minutes to give Oscar Pareja’s bunch a late lifeline, but Lucas Melano’s spectacular tap-in sealed the Timbers’ trip to MLS Cup. The third seed heading into the playoffs, Portland bounced Sporting Kansas City in an epic penalty shootout in the knockout round and outlasted the Vancouver Whitecaps in the conference semifinals before knocking off the West’s top seed over two legs to advance to MLS Cup 2015. No matter who advances from the East finals later on Sunday, Portland will play away in MLS Cup, to either the New York Red Bulls or Columbus Crew SC.

54′ — Adi fires past Gonzalez to make if 4-1 — Oscar Pareja elected to go with Walker Zimmerman at center back on Sunday, dropping regular starter Zach Loyd to the bench. On the game’s opening goal, it was Zimmerman who wound up on the ground as Adi received the ball, turned and fired a massive away goal past Jesse Gonzalez.

68′ — Diaz’s magical ball curled home by Hollingshead — Mauro Diaz is a wonderful magician capable of playing the kill through ball from anywhere on the field — this we’ve known for quite some time. His chipped through ball to set up Hollingshead’s goal was extraordinarily brilliant, even for him.

73′ — Perez heads home the free kick to pull within one — Would you be surprised to hear that it was Diaz who set up FCD’s second goal? His free kick was Perez-finding missile and found the head of the Panamanian striker at the top of the six-yard box, where 34-year-old headed home with ease.

90+5′ — Melano rounds Gonzalez, seals MLS Cup berth — Poor Jesse Gonzalez. Absolutely schooled and posterized by Lucas Melano. What a way to sew up a place in the championship final.

Man of the match: Mauro Diaz

The game in 100 words (or less): The ways in which Bruce Arena (successfully) manipulates his own lineups and that of his opponents are staggering. For instance, playing just two days after their mid-week tussle with Real Salt Lake, the LA Galaxy started Gyasi Zardes alone up top against FC Dallas on Saturday night. When they took the lead in the second half, Arena proceeded to take off a pair of central midfielders and replace them with two forwards. When Bruce does things like this, it almost always works like a charm. This time, it didn’t quite work out in Bruce’s favor, as FCD equalized three minutes after Arena’s second sub was made. Nine minutes later, FCD scored the equalizer. All hail Mauro Diaz.

59′ — Zardes heads home the corner kick, 1-0 Galaxy — Gyasi Zardes will — and has already — score many more beautiful goals than this particular bouncing, slow-rolling header, but they all count the same. In fact, those breaking a 0-0 deadlock on the road often feel as though they count for more.

77′ — Perez finishes off Diaz’s magical chip — Mauro Diaz, what a playmaker. When healthy, this guy pulls the strings for FCD like no other player in MLS. His chipped through ball to Blas Perez in the 77th minute? Slightly NSFW.

86′ — Akindele finishes off another beautiful ball from Diaz — As I was saying, Mauro Diaz’s service from midfield is very NSFW. Just have a look at this ball he plays 45 yards across the field, to Tesho Akindele, who has the composure to create his space and fire past Jaime Penedo.

Man of the match: Mauro Diaz — As great as Fabian Castillo has been — and he’s been great — Diaz is the difference between FCD being “very good” and “MLS Cup contenders.” When he takes over, he changes games before the other team even knows what hit them.

Week 2 of the 2015 Major League Soccer season is in the books. If you watched all the action of Week 1 and stuck around for the second weekend, you were handsomely rewarded.

The massive upswing in goals and free-flowing play made picking the midfielders and forwards for this week’s Team of the Week significantly more difficult — and enjoyable. 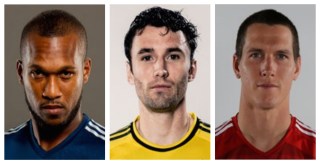 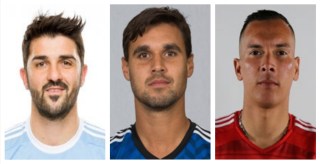