Newly fortified Paris Saint-Germain is visiting the northeast of France to take on FC Metz, and with the score tied at 1-1 at halftime, it’s already turned into a bad miss highlight reel fit for yakety sax background music.

Who else but Edinson Cavani is at the forefront, having scored the only PSG goal of the evening but also owning two glaring mistakes in front of net.

First, in the 10th minute, Cavani had a Julian Draxler rebound ricoche directly to him in front of a wide open net, but instead all he could do was pound the ball straight into the goalkeeper floundering in front of him from the Draxler save. He was no more than three feet off the line, but somehow failed to find the back of the net.

Cavani wasn’t done yet. In the 22nd minute, he managed to add another to the collection when he was one-on-one with the goalkeeper again, but failed to get it around Elji Kawashima and instead blasted the ball off the post.

The Uruguayan would eventually net PSG’s first in the 31st minute, but that wasn’t the end of the ugly showing, which apparently was contagious and migrated to the other side. Metz striker Emmanuel Riviere, formerly of Newcastle United, submitted his own resume by chasing down a rebound off Alphonse Areola, but with the net wide open and Areola slow to recover, he rifled the off-balance chance over the post.

Then, the referee got in on the act. With Metz challenging the Ligue 1 juggernaut hard just out of halftime, promiscuous former Tottenham midfielder Benoit Assou-Ekotto slid into Kylian Mbappe studs down and dispossessed the teenager, but with an impressive four-roll follow-through, Mbappe did enough to convince the referee to send Assou-Ekotto off with a straight red card.

That left Metz a man down, for which they were hopelessly outmatched. PSG scored three goals in the next 25 minutes, and that was all she wrote for the home side. Mbappe picked up a debut goal, Neymar scored, and Cavani grabbed a second. The final score read 5-1 with Lucas finishing it off in the dying minutes. 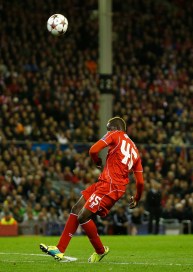 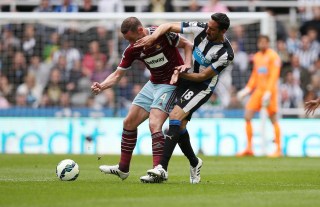 Newcastle could survive in the Premier League without a win on Sunday, and West Ham United is surely hoping to force a lot of scoreboard watching at St. James Park (Watch live at 10 a.m. ET on USA and online via Live Extra).

WATCH LIVE AT 10 A.M. ET ON USA AND ONLINE VIA LIVE EXTRA

Do you feel that? It’s the impending doom of realization that the 2014-15 Premier League is practically finished. Just one more week to go, somehow.

On Saturday, the final Saturday of the season (all Matchweek 38 games will be played at the same time on Sunday), Steven Gerrard bid farewell to the Liverpool faithful one last time, as the legend, and one-club man — until July — played his final game at Anfield.

Elsewhere, a pair of teams clinched safety from relegation and confirmed their top-flight status for the 2015-16 Premier League campaign.

For recaps, reaction and analysis on every game, look no further than below.

There was no fairytale ending for Gerrard. No late winner, no goal, not even a victory for his beloved Reds. Alan Pardew’s Palace spoiled the party and made it mathematically impossible for Liverpool to qualify for next year’s Champions League. Goals scored by Jason Puncheon, Wilfried Zaha and Glenn Murray canceled out Adam Lallana’s opener.

Sadio Mane recorded the fastest hat trick in Premier League history (three minutes apart from the 13th to 16th minutes), which set Saints well on their way to victory. Shane Long added a pair of goals before halftime and Graziano Pelle’s 81st-minute tally made six. Christian Benteke’s goal was the only bit of consolation for Tim Sherwood’s Aston Villa, who despite the result, are now officially safe from relegation.

What’s a 0-0 draw doing this far up the running order, you ask? A point was all Leicester needed to clinch their own safety from relegation. Not a terrible result for Sunderland either, who need just a point themselves next week, or a single point dropped by either Newcastle United or Hull City on the season’s final day.

The fear of relegation continues to get more and more real for Newcastle, who lost to already-relegated QPR on Saturday, thanks to goals scored by Matthew Phillips and Leroy Fer. Emmanuel Riviere was the visitors’ lone goalscorer. A Hull victory coupled with a Newcastle draw or defeat will see the Geordies relegated next Sunday.

Goals by Nacer Chadli and Danny Rose kept Hull in the bottom three. The Tigers host Manchester United next week, which means it’s not looking good for Steve Bruce’s boys.

Everton leapfrogged West Ham for a place in the Premier League’s top half, thanks to a 2-1 victory on Saturday. Leon Osman and Romelu Lukaku (93rd-minute winner) were the Toffees’ goalscorers, following Stewart Downing’s opener.

Stoke City clinched a ninth-place finish with a 0-0 draw away to Burnley, which will go down as their highest top-division finish in the club’s history.