Here’s the Tuesday morning transfer buzz after a holiday weekend in America:

“Nicolas will leave not 100 percent, but 150 percent,” said Christophe Gaither. “Can a footballer be prevented from going to a great European team? It is impossible.”

Pepe’s 11 assists were joint-second in Ligue 1 this season, and only Kylian Mbappe scored more league goals than his 22.

The 33 combined markers mean Pepe was involved in nearly half of second-place Lille’s 68 goals.

Pepe, 23, will fetch a fortune on the transfer market. Is Arsenal willing to spend enough to give Unai Emery another big playmaker? More importantly, will they outspend teams like Inter Milan?

Meanwhile, Spurs continue to be linked with playmakers. In addition to potential interest in Newcastle United’s Ayoze Perez, the North Londoners are said to have put in a $67 million bid for Giovani Lo Celso.

The Real Betis starred on loan from Paris Saint-Germain and has a release clause of approximately $111 million, so there’s probably going to be some haggling here.

Manchester United and Real Madrid are also being matched with the Spaniard.

Finally, Edinson Cavani is ready to make a move to La Liga and join Atletico Madrid should Diego Simeone’s men sell Diego Costa. Atleti is also being linked with Leicester City’s Ben Chilwell, and just announced the $25 million signing of center back Felipe from Porto.

The U.S. Men’s National Team has seen a rise in dual nationals representing the Stars and Stripes in recent years, and that trend could continue with two of MLS’ most promising midfielders interested in enhancing their international careers.

According to MSG Network’s Kristian Dyer, New York Red Bulls midfielder Felipe Martins is in the midst of a finalizing his American citizenship, while New York City FC attacker Jack Harrison has spoken with U.S. Soccer about potentially representing the U.S..

Martins already has his green card — which opened up an international slot for the Red Bulls this season –but obtaining citizenship in the near future would make him eligible for selection for the USMNT ahead of the 2022 World Cup qualifying cycle.

The 27-year-old had also previously applied for permanent residency in Canada back in 2013 while Martins was with the Montreal Impact, however, his aspirations to represent the nation never transpired.

Meanwhile, Harrison recently represented the England Under-21s in October, but he too could be on track for U.S. citizenship over the next few years if he remains in MLS.

In Dyer’s report, he notes the rising interest in Harrison from English clubs, though, and a potential move back to the United Kingdom would hurt the former Manchester United academy member’s chances of joining the USMNT.

Harrison is only in his sophomore season with NYCFC, but the young Englishman has garnered plenty of attention after scoring 14 goals and adding 13 assists thus far for the Bronx side.

The game in 100 words (or less): Just when we were oh so sure the Vancouver Whitecaps had solidified themselves as the cream of the Western Conference crop, Carl Robinson’s side lands flat on its collective face in suffering a 3-0 defeat away to the New York Red Bulls a week later. A win would have put Vancouver seven points clear (for the time being) of everyone in the West. Instead, Sporting Kansas City feature in one of two games in hand later on Saturday with a chance to close the gap to one. New York, meanwhile, needed just three more points to clinch the sixth and final playoff place in the Eastern Conference, which they did thanks to another standout, two-assist performance by Sacha Kljestan. The 32-year-old set up goals scored by Daniel Royer and Felipe to take his average to 17 assists per season for the last three years. Bradley Wright-Phillips bagged the other goal (assisted by 18-year-old stud Tyler Adams).

33′ — Kljestan feeds Royer to make it 1-0 — Kljestan tallied his 50th assist in just under three seasons since returning to MLS, which positions him among pristine company. Royer still has plenty of work to do after getting on the end of Kljestan’s ball.

58′ — BWP dinks it past Ousted for 2-0 — Wright-Phillips should be lauded for the cheeky finish after carrying the ball 40 yards, but the real story here is the ball from Adams. Watch it and feel safe in knowing he’s ready for the call, USMNT fans.

72′ — Felipe hits a laser for 3-0 — Make that 51 assists for Kljestan, who still had lots of work to do once inside the penalty area. The ball back for Felipe looks simple enough after all he did to keep it in bounds and create a bit of separation for himself.

Man of the match: Sacha Kljestan

He may have gotten away with it over the weekend, but Orlando City’s Matias Perez Garcia will now face the wrath of MLS’ Disciplinary Committee.

The Lions midfielder has earned a one-match suspension and an undisclosed fine after kicking out at New York Red Bulls midfielder Felipe during Sunday’s 1-0 win.

Upon replay, it was clear that Perez Garcia and Felipe both went to ground after jostling for the ball before the former aimed a kick at the right thigh of the Red Bulls player.

Perez Garcia will miss his club’s next match when Orlando hosts the LA Galaxy on Saturday afternoon at Orlando City Stadium. 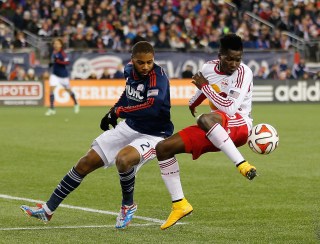