A pair of sides coming off 2-2 draws on Opening Day will mix it up at the Liberty Stadium on Saturday (Watch live at 10 a.m. ET online via Live Extra).

Andre Ayew will try to build off a thrilling debut for Swans as he leads an attack with Jefferson Montero, Bafetimbi Gomis and dynamic if mercurial midfielder Jonjo Shelvey.

For the Magpies, there’s a lot of attacking firepower on the bench. Ayoze Perez is joined by Aleksandar Mitrovic and Rolando Aarons, and could feature should Gabriel Obertan or Papiss Cisse falter.

WATCH LIVE AND ONLINE VIA LIVE EXTRA AT 10 A.M. ET

After a promising preseason, new signing Georginio Wijnaldum gave Newcastle a home lead early in the second half, but the Magpies couldn’t hold on as Shane Long came off the bench to equalize 11 minutes from the final whistle.

Saints took an early lead through frontman Graziano Pelle, but Papiss Cisse leveled for the home side just before the break, and just minutes after it Wijnaldum bagged the difference-maker.

Wijnaldum had a big chance six minutes in with space in the middle of the box but his shot cannoned off the chest of Steven Davis. Newcastle continued to push forward well early, and Wijnaldum was pulled down by Cedric Soares earning the Portuguese defender an early yellow. By the 20-minute mark Southampton had committed eight fouls to Newcastle’s one.

Southampton got its first chance when Dusan Tadic got space above the top of the box and curled a bending effort just wide with Tim Krul making a diving attempt. Down the other end Fabricio Coloccini’s volleyed effort made contact with Maya Yoshida’s arm in the box from point-blank range but the referee waved the shout off.

25 minutes gone the first breakthrough came. A meaty cross from Soares found the head of Pelle and his powerful header snuck inside the far post just out of Krul’s reach. Newcaslte had another handball shout on the half-hour mark as a corner seemed to strike Jay Rodriguez with his arm very stretched out, but again the referee stood unmoved.

3 – Southampton have won their last three league games against Newcastle, scoring 10 and conceding just one. Familiar.

But just two minutes before halftime, Newcastle worked themselves back level. A short corner cut back to Massadio Haidara whose cross took a huge deflection to the far post where Papiss Cisse was waiting for an easy goal, chesting the ball into the net.

Following halftime, Southampton made a good start but Krul made a beautiful kick-save to keep out a close range header from Yoshida. Then down the other end, Newcastle completed a scything counter-attack for a second goal. Gabriel Obertan latched onto a ball down the right flank and sent in a perfect cross to Wijnaldum who rose above a Cuco Martina for a powerful header and a Newcastle lead.

Unfortunately, the Magpies couldn’t hold on. Southampton grabbed the ascendency past the hour mark and began to press forward as the Koeman brother brought on Shane Long for more attacking prowess. It proved prophetic as a cross from Dusan Tadic on the right found Long’s head with 11 minutes to go and Southampton found themselves level.

Saido Mane had a pair of brilliant chances to bring Southampton ahead in stoppage time, but Jack Colback blocked the first effort and Mane sent his second one wide.

Liverpool is hoping a weakened Newcastle team in poor form can help right its quest for European soccer on Monday at Anfield (Watch live on NBCSN at 3 p.m. ET or online via Live Extra).

The Magpies have struggled to defend during a four-match losing skid, and haven’t been much better with an uninspired attack. Mehdi Abeid enters the lineup for Jonas Gutierrez on Monday, while Sammy Ameobi departs for Gabriel Obertan.

Liverpool is coming off a pair of losses, one to Manchester United and another to Arsenal. They’ll have Jordon Ibe ready to link up with Philippe Coutinho and Raheem Sterling.

WATCH LIVE ON NBCSN AT 3 P.M. ET OR ONLINE VIA LIVE EXTRA

Jack Colback’s 74th minute goal should’ve been the start of a Newcastle blowout, but missed chances and poor marking allowed Peter Crouch to grab Stoke City a point in a 1-1 draw on NBCSN early Sunday.

Substitute Gabriel Obertan was a star for John Carver, who came within minutes of presiding over back-to-back Newcastle wins, but several poor plays from Mike Williamson and the Magpies defense begged the Potters to tie things up.

Missed passes and dicey fouls were the story from a rough bit of Sunday morning viewing, but they gave way to an exciting ending.

Newcastle came very close to finding the opener in the 11th minute when Asmir Begovic just got a hand on Remy Cabella’s flicked header off a Moussa Sissoko cross from the left.

Cabella and Sissoko nearly turned the trick 15 minutes later, when the latter burst up the middle of the field before working a hopeful 1-2 that Begovic claimed before Sissoko could arrive in the six.

It was a clumsy, if vicious, first half. Four yellow cards were handed out, with three going to Stoke and one going to Sammy Ameobi.

Cabella slid Ayoze Perez through in the 43rd minute, but his right-footed shot from just inside the 18 bounded wide of the goal.

The Potters could’ve found their way into a halftime lead, but Tim Krul made a flying left-handed save on Mame Biram Diouf. 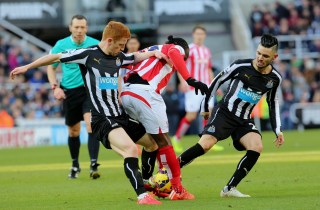 The second half took a good, long while to show any excitement, but Stoke had the better of possession and earned several corner kicks and somewhat-dangerous restarts. The match needed an infusion of energy for the Magpies, as a content Stoke brought in USMNT veteran Geoff Cameron shortly after half.

Carver took off Vurnon Anita and put Papiss Cisse up top with just over 25 minutes to play, before moving Remy Cabella off for Obertan moments later.

Obertan made all the difference, as he linked up with Daryl Janmaat down the right side for plenty of opportunities. There was little danger, though, until Obertan found fellow Frenchman Sissoko, who laid off for Colback — fortunate to have avoided a second yellow card moments earlier — to blast home.

A gorgeous bit of football amidst the mediocrity. Colback strikes for Newcastle.

The Magpies lead opened Stoke up, with both Obertan and Perez missing glorious chances in the final 10 minutes.

And those would come back to haunt them, as Crouch headed over a diving Krul just before four minutes of stoppage time on a huge cross from Cameron. 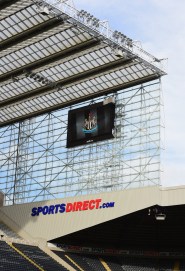