The UEFA Champions League began its third qualifying round on Tuesday, with five sides taking advantage of the opportunity at hand.

Hans Vanaken’s 37th minute penalty was the difference as the Belgians will take an advantage to Ukraine.

There were some North London Derby participants on show, as Chuba Akpom scored PAOK to make it 1-1 and Klaas-Jan Huntelaar bagged a 57th minute equalizer for Ajax after the Greek side went ahead.

American prospect Sergino Dest was again an unused sub for the Dutch side.

Ziyech has been linked with a move to either Leicester City or Bayern Munich, and it’s easy to see why.

Ziyech with the freekick goal for Ajax #UCL pic.twitter.com/I5abXzUIF9

The UEFA Champions League moved one more step toward the playoff round with Tuesday’s first legs of the third qualifying round.

Uwe Rosler’s hosts held the lead for a whopping nine minutes, through Anders Christiansen, before the Hungarian club formerly known as Videoton answered through Loic Nego.

USMNT midfield prospect Romain Gall made his UEFA Champions League debut, playing the final 10 minutes of the draw. Gall managed a shot during his appearance.

Dusan Tadic struck again, scoring another UCL goal for the visitors as they built a 2-0 away lead (Klaas Jan Huntelaar bagged the other). But Medhi Carcela scored in the 67th minute and Renaud Emond converted a penalty deep into stoppage time to send the tie back to Holland level at two.

USMNT midfielder Keaton Parks was not in the 18, but goal scorer Franco Cervi very much was and saw his deflected shot put the Portuguese hosts ahead after one leg.

With just 32 days remaining until the start of the 2015 CONCACAF Gold Cup, the U.S. national team kicked off its final round of pre-Gold Cup roster announcement friendlies on Friday. The Yanks’ late rally from a two-goal deficit reversed the Americans’ trend of conceding late goals, instead scoring a pair of their own inside the game’s final five minutes to beat the Netherlands, 4-3 (full highlights below), in Amsterdam.

Victory for the USA was their first-ever win over Holland as Gus Hiddink’s side were great going forward, hitting the woodwork twice late on, but were all over the place at the back and the U.S. took full advantage.

The lineup deployed by head coach Jurgen Klinsmann was short a number of key contributors — Clint Dempsey, Jermaine Jones and Jozy Altidore, to name a few — and averaged 23.5 years of age among its 11 members, and yet somehow, it was five younger-for-older substitutions in the second half that tilted the game in the USMNT’s favor.

The game’s first real chance fell to the feet of Gyasi Zardes in the 15th minute. The LA Galaxy striker pounced on the botched clearance of two Dutch defenders outside their own six-yard box. Zardes made a quick turn eight yards out from goal and fired a quick snap-shot on goal, but Dutch goalkeeper Jasper Cillessen made a quick-reaction kick save.

[ RELATED: Player ratings: Who helped/hurt their Gold Cup stock the most? ]

After struggling to do so very early on, Klinsmann’s side found its footing and the Yanks settled into a nice spell of possession and looked the more dangerous side for the ensuing 10 minutes. Michael Bradley, captaining the USMNT on his 97th international appearance, fired a low, left-footed shot off Cillessen’s left-hand post in the 19th minute, and Fabian Johnson’s follow-up shot went inches wide of the opposite post.

In the 26th minute Klaas-Jan Huntelaar lost U.S. defender John Brooks, got behind the American backline and raced in, one on one, with Guzan. Brooks made a desperate recovery run, though, reeling the Dutch marksman in and made the last-ditch block of Huntelaar’s shot.

Less than a minute later, Huntelaar wouldn’t waste his next chance, a header from 11 yards out. Manchester United new boy Memphis Depay served up the in-swinging cross, which eluded Brooks and fellow center back Ventura Alvarado, and found the head of Huntelaar, who finished like the prolific goalscorer he is (40th international goal).

The USMT equalized just six minutes later, though, when Zardes used the entirety of his 6-foot-2 frame to get on the end of Johnson’s out-swinging cross to the back post. Zardes applied the outside-of-the-foot finish from an extremely tight angle, and the ball found the back of the net after a deflection off Cillessen for his first international goal.

The second half began with the Dutch pouring more pressure on the U.S. defense in the 47th minute, as Robin van Persie headed Daley Blind’s left-footed cross goalward, only to see Guzan palm the ball away from close range. The rebound then fell to Van Persie, whose quick backheel was cleared away from goal by Kyle Beckerman.

A minute later, Huntelaar doubled his tally and restored the Dutch lead when he headed home Gregory van der Wiel’s cross from the right, beating Michael Orozco at the near post and beating Guzan once again.

Four minutes later, Huntelaar nearly completed his hat trick, if not for a deflection off Depay six yards out from goal. Huntelaar’s first-time shot from outside the penalty area looked destined to challenge Guzan once again, but the goal-bound ball glanced off Depay, wrong-footing the American ‘keeper and finding the back of the net to make the score 3-1.

Following four substitutions in quick succession, the Yanks pulled a goal back in the 70th minute, when Bradley played DeAndre Yedlin into the Dutch penalty area, where his simple, squared cross found the boot of a seriously overlapping Brooks for the easy finish at the back post.

Danny Williams pulled the USMNT level in the 89th minute with a fierce strike and deflection outside the penalty area, which beat Cillessen at the near post. A minute later, Bradley played Jordan Morris down the right side of the Dutch penalty area, where he crossed to the top of the six-yard box and Bobby Wood redirected the ball inside the far post for an unlikely 4-3 comeback victory.

The USMNT returns to action next Wednesday, June 10, when they’ll face the current World Cup holders, Germany, in a friendly in Cologne, Germany.

Michael Bradley, Zardes and Brek Shea were among those stopped by Jesper Cillessen in the first half from Holland, where Jurgen Klinsmann’s Yanks had the better of the chances on the road early, before the home side settled in late.

And Klaas-Jan Huntelaar scored on a 27th minute header to give the Dutch their advantage before Zardes tied it up six minutes later.

Zardes came upon a massive opportunity when a pair of Dutch backs miscommunicated on a clear, but his side-volley on the turn was parried by Jesper Cillessen.

The Netherlands had a good spell of possession and threat near the 19th minute, but Kyle Beckerman was instrumental in quelling the attack.

Bradley beat Cillessen in the 20th minute, but hit the goal post before Fabian Johnson was offside in slotting the rebound off the opposite post.

Moments later, Shea flew up the left wing to collect a through ball and dart in goal, but his low shot hardly challenged Cillessen.

Daley Blind had a hard shot from the top of the 18 take a turn off Timmy Chandler and go out of play in the 24th minute, and Klaas-Jan Huntelaar took way too long on a golden chance two minutes later before the Yanks’ John Anthony Brooks made up for poor positioning.

But Huntelaar netted moments later, getting his 40th national team goal when he darted between Ventura Alvarado and John Anthony Brooks to head Memphis Depay’s cross past Guzan.

Zardes found the equalizer, and his first international goal, at Amsterdam Arena when he pushed a cross from Fabian Johnson off of Cillessen and into the goal.

Depay should’ve lifted the Dutch back into the lead in the 39th minute, but he tried to find Van Persie instead of the back of the goal. He also nearly scored just before halftime, but lashed wide of the goal. 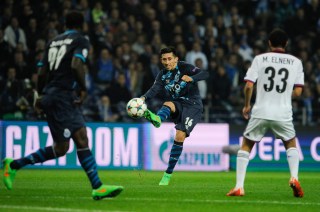