Kostas Mitroglou did what Pierre-Emerick Aubameyang couldn’t, and that has Benfica ahead after one leg of its UEFA Champions League tie with Borussia Dortmund.

Benfica leads 1-0 after Tuesday’s first leg despite being the inferior team for most of the day. The second leg is March 8 in Germany.

USMNT phenom Christian Pulisic subbed into the match in the 82nd minute for BVB, picking up a yellow card two minutes later.

Mitroglou’s second half goal came after Aubameyang missed a pair of first-half chances and before the Gabonese striker had a PK saved at the Estadio da Luz on Tuesday.

The first half belonged to Dortmund, as the visitors completed 300 passes and held 64 percent of the ball.

But BVB failed to put one of its four shot attempts on target. Pierre-Emerick Aubameyang blazed one over the goal before sliding short of a cross-six tap-in attempt.

Mitroglou scored his goal off a corner, as Luisao moved the ball to the former Fulham striker, who bested the keeper with a touch and shot.

Have a look at the video below to see Mitroglou unleash a wonderful effort from the edge of the box as the Benfica striker scored two goals in a week for Greece. He also scored 25 goals in 45 appearances for Benfica last season on loan from Fulham before making his switch permanent this summer.

Once upon a time this man was Fulham’s club-record signing but he only played three times for the Cottagers and failed to score as they were relegated from the Premier League.

The Faroe Islands have never played in a World Cup or European Championship and have exactly one player who plies his professional trade outside of Scandinavia.

But the tiny Danish archipelago has not only defeated Greece for their first qualifying win since June 7, 2011, it’s also managed to get a team’s manager fired.

Saying “There was no other option” after the loss, Greece has parted ways with manager Claudio Ranieri after just four games.

Ranieri’s player selection had been met with much derision in the media, as he dropped Giorgio Samaras and Kostas Mitroglou for this round of qualifiers.

The devastating loss to the Faroes left former European champions Greece bottom of group F and facing an uphill struggle to qualify for the Euro 2016 finals in France.

The statement said that Ranieri’s departure as coach had been decided at a meeting with federation president Giorgos Sarris which had taken place “in a good climate.”

“There was no other option than to terminate the contract,” it added referring to the loss to the Faroes.

Regarding Ranieri’s compensation, although his contract called for the full amount (1.6 million euros for two years) to be paid in case of removal from his post, the two sides agreed “on a much lesser total,” the announcement said.

Greece made the 2014 World Cup’s Round of 16 under Fernando Santos before bowing out against Costa Rica in penalty kicks. They’ve lost three home qualifiers, with their lone point in group play so far coming on the road to Finland.

Hopefully the new Greek coach won’t choose to play a brand of soccer more akin to capturing the flag than sitting on it until the other team takes a nap. 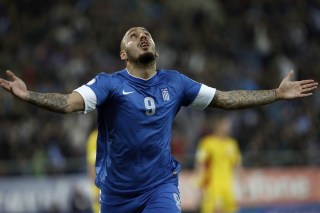 The first matchday of UEFA Champions League action took place on Tuesday as Groups A-D slugged it out.

There were plenty of the shocks across the eight games in Europe’s elite club competition.

Here’s the word on what happened as the UCL is back, baby!

Carlos Tevez scored twice in Turin as Swedish side Malmo held their own against the Italian champions. The Argentine striker slotted home and curled in an absolite beauty of a free kick to set Massimiliano Allegri’s side on their way.

The Greeks raced into a 2-0 lead at home, as Masuaku and Afellay were both on the scoresheet. Mario Mandzukic handed Atletico a lifeline just before half time as last seasons runners up were slow starters. However, Fulham loanee Kostas Mitroglou then scored to put Olympiakos 3-1 up before a late Antoine Griezmann goal set up a nervy finale.

A dramatic finale at Anfield as Mario Balotelli scored his first goal for Liverpool, but Ludogorets then equalized through Ablo Paulos in the 90th minute. Mr. Dependable, Steven Gerrard, then stepped up to score an injury time penalty kick as Liverpool marked their first game back in the UCL with a win. Just.

Suchy scored an own goal to give Real the lead in the first half and they never looked back. Goals from Gareth Bale, Cristiano Ronaldo and James Rodriguez tore Basel apart in a six-minute spell, as Basel pulled one back before half time through Gonzalez. Karim Benzema then added some gloss to the scoreline late in the game, as a flowing move saw the Frenchman hammer home.

Hulk clipped home a cool finish to open the scoring, then Alex Witsel doubled the Russian sides lead after 22 minutes with a header. Andre Villas-Boas’ men are off to a flier in Group C.

Leverkusen have had all the play in the first half but Monaco were the victors in their own principality. Portuguese international Joao Moutinho got the winner as the French side triumphed on their return to the Champions League.

BVB outshot the Gunners 21-4 as Ciro Immobile and Pierre-Emerick Aubameyang scored to hand the Germans a perfect start to group play. Immobile ran 60-yards and smashed the ball into the bottom corner for the opener then Aubameyang also caught Arsenal on the counter in a night to forget for Premier League side.

The Belgians went ahead as youngster Dennis Praet scored but Galatasaray equalized in the final minute through Yilmaz to earn a point. American midfielder Sacha Kljestan came off the bench in Istanbul but couldn’t help his side hang on to the win.

Fulham with plenty of explaining to do for the Kostas Mitroglou debacle March 6, 2014 1:28 pm