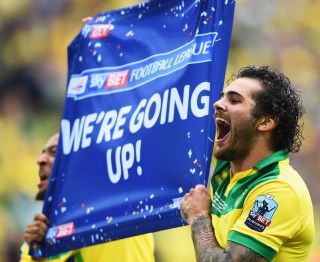 West Bromwich Albion and Norwich City are now even on points, both five points above the relegation zone. But even discounting the Baggies’ game in hand, after two rather weak performances from the Canaries, it’s Norwich that should be sweating the possibility of time in the Championship.

The hosts had the majority of the possession and the better of the chances in the first half, yet somehow, West Brom went into the break with the lead.

Norwich very nearly opened the scoring after just fifteen seconds. A sloppy backpass allowed Gary Hooper in on goal, but the Baggies defense were able to clear.

Thirteen minutes in, Johan Elmander wasted a golden chance for the Canaries, moments after Hooper had forced a save from Ben Foster. A half-cleared ball fell perfectly to the Swede, but rather than set up his teammate, Elmander elected to take a shot from twenty yards out, skewing it into the stands instead.

That miss was made even worse minutes later, when West Brom took the lead. An unfortunate slip from Martin Olsson allowed Morgan Amalfitano to slip past him, placing his shot perfectly into the far corner of the net. That’s two for two for the Frenchman, who just might be single-handedly keeping the Baggies in the Premier League.

Norwich got off to a decent start in the second half, with Elmander looking to redeem himself, although he was unable to connect with a good ball from Robert Snodgrass. Shortly thereafter, Snodgrass himself forced Ben Foster to tip his shot into the bar, just minutes after Hooper hit the woodwork.

That was about all the Canaries were able to muster, however, as their attack rather petered out in the final fifteen minutes. Chris Hughton introduced Nathan Redmond and Luciano Becchio, but kept Ricky van Wolfswinkel on the bench. Becchio managed a decent attempt minutes from the end, but his shot went just wide.

Still battling for a spot in Europe, Newcastle United will sport a new look today against visiting Norwich City. At 2:45 ET, the Magpies will play their first match since agreeing to sell Yohan Cabaye to Paris Saint-Germain (with the game available to stream on NBC Live Extra).

It’s a blow for Newcastle, if an inevitable one. Cabaye nearly moved this summer, and with teams willing to approach $30 million for the France international, it was only a matter of time until the midfielder moved. With PSG having hit the $33 million mark to bring the former Lille dynamo back to France, Alan Pardew will have to find another way to augment the scoring of Loic Remy up top.

The Magpies enter the day’s match one point back of Manchester United for seventh place, a spot that could prove England’s last entry into UEFA Europa League. Should they fail to adapt to the loss of their best player, Newcastle could settle into mid-table insignificance. The team’s too far from the drop to worry about relegation.

The same can’t be said for Norwich City, though the Canaries have crafted a six-point gap between themselves and 18th. Chris Hughton’s side is coming off a much-needed 1-0 win at Hull City, their first league win since Dec. 7. Make it two in a row, and Norwich could finish the day in the table’s top half.

To do that, the Canaries will need to find goals, with their 18 on the season ranking 18th in the Premier League. Today, Gary Hooper and Ricky van Wolfswinkel get the call up top. The pair have combined for five goals in 30 appearances this season.

The easiest way Manchester City could have taken the pressure off debutant goalkeeper Costel Pantilimon would have been to score a lot of goals. That’s exactly what the home side did, defeating Norwich City, 7-0, on Saturday.

The Romanian goalkeeper had little to do all game. Manager Manuel Pellegrini handed him his first Premier League start in place of Joe Hart, whose troubles this season have been well documented.

His teammates at the other end helped him by scoring early and often.

In the 16th minute, Canaries midfielder Bradley Johnson got the last touch on the opening goal. Gaël Clichy overlapped on the left flank and sent in a cross for David Silva. His initial shot was blocked, as was Sergio Agüero’s follow-up effort. However, that block ricocheted off Johnson and looped into the goal.

Just four minutes later, Silva would find the target. Samir Nasri found Agüero over the top on a counter-attack, and he laid the ball off for Silva’s late run into the penalty area. He made no mistake this time, smacking the ball past John Ruddy in the Norwich goal.

Nasri got another assist, helped by a defender, five minutes later. His corner kick found Matija Nastasić at the near post, and he headed into a defender, the deflection deceiving Ruddy on its way into the goal.

The fourth came from center forward Alvaro Negredo. Silva and Yaya Touré exchanged short passes on top of Norwich’s penalty area before slotting the ball through to Agüero. The Argentine was in an offside position when the ball was played, but the flag stayed down.

Shortly after, Pantilimon made the only tough save he needed to preserve his clean sheet. Gary Hooper took his chances from long distance, and the lanky Romanian needed nearly all of his 6-foot, 8-inch height to touch it around the post.

Yaya Touré added a fifth in the second half, curling a world-class free kick directly into the top corner from about 23 yards out on the hour mark. Agüero added a goal of his own after his two previous assists, slamming home a volley from around the penalty spot after a soft clearance by Sébastien Bassong in the 71st minute.

Substitute forward Edin Džeko capped it off in the 86th minute with a nice turn and strike inside the penalty area. The cheers from the City crowd felt almost ironic by that point, as its team won through seven different goalscorers. Pantilimon never looked uncomfortable in his Premier League debut, as his team outshot Norwich, 26-7.

The biggest question before Manchester City hosts Norwich has been settled: Joe Hart will be on the bench, while Romanian Costel Pantilimon will get the start. That signals that manager Manuel Pellegrini’s patience may have finally run out for his up-and-down English goalkeeper.

In the last two seasons between City and Norwich, 25 goals have been scored, so the new man is sure to see some action between the posts.

For Norwich, Nathan Redmond (thigh) and striker Ricky van Wolfswinkel (ankle) were in doubt before the match, and they have indeed been left off the match-day squad completely for the Canaries.

City may have lost two of its last four, but Norwich has only won once in its previous six matches. Neither side will want to drop points today, with the host side trying to remain within striking distance at the top of the table, and the visitors trying to scrap their way out of the relegation zone.

You can watch the game live on NBC Sports Live Extra, on your television and online, with coverage starting at 11 a.m. ET.