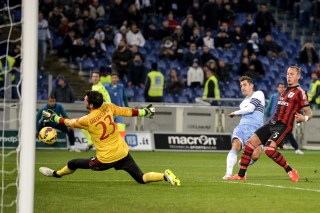 New Italy boss Antonio Conte has named his roster for upcoming Euro 2016 qualifiers against Azerbaijan and Malta, but striker Mario Balotelli, who has been considered one of Italy’s more dynamic forwards, didn’t make the cut again.

And this action arrived after Brendan Rogers decided to nix the Italian from his usual starting XI in Liverpool’s 2-1 win over West Brom earlier today.

Balotelli was also excluded from his country’s friendly vs. the Netherlands and Euro qualifier against Norway in September.

Conte has added a fresh face to replace the 24-year-old striker in the forward rotation. His name is Graziano Pelle and he’s enjoyed a great beginning to the season, scoring five goals in eight games so far this season. Pelle is a huge reason for Southampton’s early year success.

On the defensive side, youngster Daniele Rugani received his very first call-up to the senior team, and the Blues highest-capped defender, Juventus man Giorgio Chellini, is unsurprisingly set to star for his country.

Below is the complete roster, via ESPN FC.

Diego Godin’s late header sealed a 1-0 win for Uruguay that put them in the last 16 of the World Cup, as four-time champions Italy crashed out at the group stage for the second-straight tournament.

For large periods both teams failed to get going, but Godin’s late header grabbed the three points which made sure Uruguay finished second in Group D behind winners Costa Rica who drew with England.

Controversy marred the second half of the match, as Claudio Marchisio was sent off for a lunging tackle and the Italian side were reduced to 10-men. That made all the difference as Uruguay piled on the pressure but more controversy arrived just before Godin’s game-winner, as Luis Suarez inexplicably looked to have bit Giorgio Chiellini in the shoulder. More on that to follow.

Godin’s winner then arrived as the Atletico Madrid defender followed up his La Liga winning and UEFA Champions League final goals by netting another crucial strike to send La Celeste through.

He was the hero as Uruguay is in the knockout stages but we will certainly hear more about Suarez’s incident as the fallout continues.

It was, as expected, a tense start in Natal as both Mario Balotelli and Suarez were the subject of touch tackles early on. The first real effort on target came from a trademark Andrea Pirlo free kick which dipped and swerved just under the bar and troubled Uruguayan ‘keeper Muslera enough to make him palm it over for a corner.

As the first half wore on Suarez and Cavani grew into the match and the Italian defense struggled to keep the combative duo under wraps. The latter went down in the box under a challenge midway through the first half but Uruguay’s penalty appeals were waved away as the tentative opening continued.

Balotelli was then cautioned for a high challenge as the Italian forward showed his frustration and would walk a tight-rope for the rest of the game.

Uruguay started to push for the opening goal they craved and Suarez found some space in the box but Gianluigi Buffon smothered his effort and also blocked Nicolas Lodeiro’s follow up with a fine double-save. For the rest of the first half both sides continued with the tough-tackling and staunch defensive play as Suarez and co. had 45 minutes to save their World Cup aspirations.

At half time both teams made changes, as Balotelli was replaced by Marco Parolo as the eccentric frontman looked injured but was also risking a red card after several confrontations with Uruguayan players. Maxi Pereira replaced Lodeiro at the break for Uruguay as both managers tried to shake things up with a last 16 place on the line.

Suarez tried to get things going as he clipped a ball through to Rodriguez but the left winger dragged his effort wide of the far post. Then the entire game turned on its head as Marchisio was sent off for a lunging tackle on Arevalo and Italy were reduced to 10-men. The tackle was right in front of referee Marco Rodriguez and he had no hesitation in dishing out a straight-red.

Uruguay smelt blood in the water.

Italy’s defense dug deep and Buffon used all his experience to make a terrific save from Suarez as the predatory striker ran clean through on goal but the Juventus ‘keeper pushed his effort wide. The Uruguayans kept pushing hard for the goal which would send them into the knockout stages and that finally came as Godin headed home from Gaston Ramriez’s corner in the 82nd minute to break Italian hearts.

Another match, another win. That’s nine wins from nine for Michael Bradley’s Roma as they continue to shred their opponents. The American, on as a substitute, scored in the 82nd minute to give 10-man Roma yet another victory.

The only surprise of the weekend in Serie A play came when AC Milan fell 3-2 on the road at Parma? But is that even a surprise anymore?

Milan now have just two points on the road in Serie A play from three matches, as Marco Parolo’s free kick goal with just seconds left on the clock gave Parma the victory and sent them to seventh in the table, while Milan remain mired in ninth.

The goal was Parolo’s second of the match, his first coming in the 11th minute when he opened the scoring on a rebound.

Antonio Cassano had the third for Parma, while Alessandro Matri and Matias Silvestre found the scoresheet for Milan.

Gonzalo Higuain converted a pair of early penalties to down Torino.  Dries Mertens was tripped in the box by Nicola Bellomo in the 11th minute for the first, and a handball in the box by Kamil Glik gave them their second.

Migjen Basha was shown a straight red with five minutes to go when he brought down Goran Pandev who was clear on goal.

Both goals came in the first 25 minutes, but Juventus came close a number of other times in a dominating win.

Juan Cuadrado bagged a double as Fiorentina held on to go fifth in the Serie A table.  The brace overcame an early Chievo lead thanks to a Bostjan Cesar 12th minute header.

Chievo drop to the bottom of the table thanks to results by Sassuolo and Bologna.

Sassuolo rise off the bottom of the table. Nothing else to see here.

The home side grabbed their first win of the season courtesy of Jose Angel Crespo’s third-minute score.

Inter picked up the first win of their last four matches thanks to goals by Rodrigo Palacio, Esteban Matias Cambiasso, and Rolando plus an own goal from Verona.

An odd turn of events saw Sampdoria see out 10-man Atalanta and ease away from the relegation zone.

The home side scored when Shkodran Mustafi headed in for the lead.  Atalanta midfielder Luca Cignarini had tried to hit the ball away but failed.  The referee initially blew his whistle to send off Cignarini and award a penalty, but when the ball trickled in he instead rescinded the red card and allowed the goal.

Atalanta then did in fact lose a man seven minutes later when substitute Constantin Nica was sent off in just his 2nd career Serie A match for a hard tackle.