Sunday’s Africa Cup of Nations semifinals are set for Cairo, as Tunisia will meet Senegal and Algeria tangles with Nigeria.

All but Senegal have won AFCON crowns, though Nigeria is the only one to claim the honors in the last seven tournaments.

A two-goal burst from Ferjani Sassi and Youssef Mskani by the hour mark prodded Tunisia past the surprising Barea.

Naimi Sliti scored deep into stoppage time to complete the score line, which ends Madagascar’s first AFCON with three wins (one by penalties), a draw, and this loss.

Sofiane Feghouli gave Algeira a first half lead, but Jonathan Kodija (Aston Villa) answered at the hour mark for the only goals of regulation.

Youcef Belaïli smashed the post with his bid to score the winning penalty, but Les Elephants could not take advantage of the opening. Serey Die his the same post with similar vigor and Algeria moved to within two wins of its title and final since 1990.

🇩🇿🇩🇿🇩🇿 Algeria advance! (Well, it happened while twitter was down but we still want you to see it 😅)

A missed penalty gave Ivory Coast hope in the final round, but the captain sent his off the post and #LesFennecs are moving on to the #TotalAFCON2019 semifinals. pic.twitter.com/QtpQBOsdoC 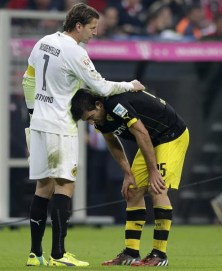 FC Basel handled struggling Liverpool a 1-0 defeat in Switzerland on Wednesday, as the Premier League club have failed to win in their last four games in all competitions.

The game-winning moment arrived in the second half as Marco Streller scored from close range and Liverpool never got going at St. Jakob Park. The Reds started brightly but Basel’s high-energy approach forced the Reds back throughout the match and Brendan Rodgers’ side had no answer.

Basel famously drew 3-3 with Liverpool in the Champions League 12 years ago and have since beaten Tottenham, Manchester United and Chelsea in European competitions. Their stranglehold over Premier League clubs continues, as Liverpool and Basel now have one win and one defeat in Group B and are second behind Real Madrid. Worst still, Liverpool now face back-to-back matches against Madrid as their Group B fate hangs in the balance.

Early on Liverpool looked bright as Basel were pushed back in their own half and the Swiss champions had to make an early sub as Derlis Gonzalez had to replace Behrang Safari. Raheem Sterling was booked early on for a professional foul as Basel began to expose some gaps on the break in Liverpool’s midfield.

Steven Gerrard almost let in Basel for the opening goal as Simon Mignolet bowled the ball out to Gerrard but the Liverpool skipper was caught on the ball and Marco Streller saw his shot blocked and sent wide for a corner. Elneny was found on the edge of the box in plenty of space and curled an effort towards the top corner which Mignolet saved comfortably.

Basel continued to push forward and Hamoudi hammered a shot wide of the post from the left and then Serey Die went on a mazy run but his shot was blocked by Mignolet. Lovren went close with a header just before the break but Liverpool failed to settle during the first half in Switzerland.

In the 51st minute Hamoudi was set free down the left and hammered a low shot across Mignolet which the Belgian ‘keeper saved well and Lovren hacked away the rebound for a corner. From that set piece Streller gave Basel the lead as a header from Martin Skrtel forced his own ‘keeper to save but Streller was on hand to prod home the opener. 1-0 to Basel. It was Streller’s ninth goal in the Champions League, all of which have been for Basel, as the 33-year-old captain set the Swiss side on their way to yet another famous win against an English club.

Liverpool finally woke up and Balotelli hammered a free kick towards goal which hit Vaclik in the chest and Lazar Markovic’s follow up was blocked bravely. The Reds pushed for an equalizer late on but Basel’s defense stayed strong to shutout Liverpool and secure a deserved win.

Liverpool are back in UEFA Champions League action as Brendan Rodgers’ men are in Switzerland to take on FC Basel.

With no wins in their last three Premier League games, this match represents a welcome break from the rigors of the PL.

The Reds beat Ludogorets in their opening Group B match two weeks ago but a tricky trip to Basel will really test their UCL credentials and is crucial ahead of back-to-back matches against reigning European champions Real Madrid.

A point away in Basel isn’t the worst result in the world as the locals get pretty fired up at St. Jakob Park but with Raheem Sterling and Philippe Coutinho supporting Mario Balotelli up top, Liverpool will be hoping to make it two wins from two in the UCL.

The relative successes of Lionel Messi, Manuel Neuer and Arjen Robben were not shocking to followers of the world’s game, but several players turned the wattage up on their stars during the World Cup in Brazil.

Let’s take a look at ten players who surprised the world over the past month (We’re going to go with positive surprises because, golly, that’s the type of folks we strive to be):

10. Jermaine Jones, United States — This could’ve been a spot for DeAndre Yedlin, but the fact remains that the electrifying youngster did his work off the bench while Jones played his best matches as an American player. In fact, you could justifiably say that Jones’ tournament more or less cemented some doubters of the “Jurgen Knows Best” crowd.

9. Hector Herrara, Mexico (above right) — We know, El Tri fans, he’s a star. But who had him pegged to be one of the best midfielders in the entire tournament? The 24-year-old Porto man was dynamite.

8. Juan Cuadrado, Colombia — Again, when you’re an important player for a club like Fiorentina — in a league that isn’t all about foreigners — it’s not a massive surprise. But he provided flair and toughness for the Colombia run.

7. Enner Valencia, Ecuador — A shorter tournament than he would’ve liked, but the new West Ham man now had 7 goals in 13 caps and is coming off a season in Pachuca that saw him net 18 times in 23 matches.

6. Daley Blind, Netherlands (also above right) — The 24-year-old Ajax man sends in mesmerizing crosses and knows how to get stuck in as well.

5. Giancarlo Gonzalez, Costa Rica — Even the fans in Columbus may’ve been surprised by how well the Crew defender, 26, performed at the tournament. Gonzalez was a massive part of a CRC back line that allowed just two goals in five matches: an Edinson Cavani penalty and a Sokratis Papastathopoulos goal.

4. Mathieu Valbuena, France — At a generous 5-foot-6, Valbuena was a diminutive terror for the French side. At times, he was simply a blue blur that Switzerland and Honduras could not handle. At age 29, did anyone expect the Marseille bet to shine so brightly?

3. Memphis Depay, Netherlands — The youngster prefers to be called Memphis due to his father’s lack of interest in his rearing, and the man performed like a Beale Street star. Just 20, Memphis’ best season for PSV was his 14-goal campaign this season. And his World Cup goals against Australia and Chile were his first as a Dutch international.

2. Keylor Navas, Costa Rica — His biggest honor of the last five years was being named La Liga player of the month in April, so perhaps club form keyed the 27-year-old’s performance at the tournament. There’s no denying that the 58-times capped keeper, perhaps set for Bayern Munich, was at-worst the second-best keeper at the tournament.

1. James Rodriguez, Colombia — We had James at No. 57 in our pre-tournament rankings, and that now seems absurdly-low. But remember: James only had five international goals before the World Cup, and his single-season best for club was 14 at Porto in 2012. Something tells us he’ll have a better chance to shine with Monaco or somewhere else this season.