What a weird journey it’s been for former Colorado Rapids youngster Shane O’Neill.

As long as the paperwork goes through, England is about to have another American competitor. The 22-year-old Irish-born defender is leaving Cypriot side Apollon Limassol to join Cambridge United on loan.

The U’s are three points out of a promotion playoff spot in League Two, England’s fourth-tier. Cambridge is managed by longtime Crystal Palace, QPR and Leeds midfielder Shaun Derry.

O’Neill has made 22 appearances for the United States’ U-20 and U-23 sides, but can still represent Ireland if he’d like. He left Apollon Limassol on loan last year, but hasn’t played for loan club Royal Mouscron-Péruwelz or his permanent club.

Let’s hope this is a step in the right direction — or at least out of the wilderness — for the promising and versatile O’Neill.

A steely group of hopeful Olympians looked ready for prime time, and Jordan Morris scored against a Mexican side for the second time in a week.

Morris, Christian Dean and Mario Rodriguez scored goals for the home side as the United States U-23 side scored a 3-0 win over Mexico on Wednesday night in California.

The trio symbolize just how far the U.S. Olympic team has come, with Rodriguez a member of Borussia Monchengladbach, Morris a Stanford University player and Dean a player for the Vancouver Whitecaps.

Southampton goalkeeper Cody Cropped made a handful of fine saves for the States, including a diving stab at a first minute shot from the Liga MX-heavy Mexican team.

All the goals came after halftime, beginning with Rodriguez’s finish of a play started by Fatai Alashe (San Jose) and Luis Gil (Real Salt Lake):

And Morris finished things off with this lunging, classy poke of a Shane O’Neill (Colorado) cross:

In an otherwise even game, the U-23s finished off three of their chances and defended well enough to pick up a clean sheet (thanks in large part to Cropper).

Next up, from USSoccer.com: 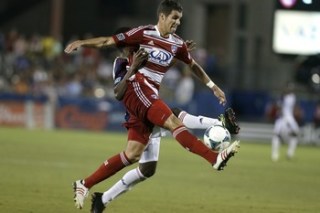 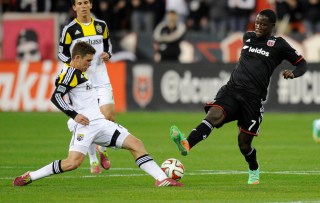 The United States men’s U-23 national team faced a tough task in dealing with Brazil’s U-23 team in Brasilia on Monday night.

And it didn’t go very well right off the bat, as the home squad struck first. Twenty-four-year-old Atletico Mineiro striker Luan netted in the third minute.

Gyasi Zardes is having a dynamite season, scoring 14 goals to break the single-season record for an MLS Homegrown player.

We’ve been tooting the Zardes horn for a while now, but his ascension to the apex of Homegrown goal scorers doesn’t make him the clear-cut best Homegrown player.

Since the program was started in 2008, over 100 players have earned Homegrown contracts. So which 10 players have broken through with the most effective careers?

[ VIDEO: US Soccer puts out tribute to Bocanegra ]

Conditions: it’s about careers, not just stints with a club. Therefore, Andy Najar’s move from Homegrown to Honduran national team player and Anderlecht player counts, even if his time in DC ended in 2013.

Let’s give it an almost-completely unscientific whirl:

Analysis: Bit of a gulf between 7 and 8 here, with apologies to Trapp. If this were a major sports draft, we’d say that’s where the current drop-off lives. Still, players 8-10 are very early in their careers and capable of leaping. Both O’Neill and Zardes aren’t far from the Top Five, either.

Analysis: Yedlin and Agudelo drop because it was their national team performances that earned them their renown and transfers, while Najar and Hamid have starred with the clubs that promoted them. Surely we could be mere months away from Yedlin rocketing up this list, while Fagundez, Zardes and O’Neill have top play potential as well.

Highlights: San Jose within one point of Colorado after beating Rapids at Buck Shaw October 10, 2013 1:36 am