After a nearly 20-year professional career, Stevan Pienaar has decided to hang up the boots.

It’s been an amazing ride made more special by you, the fans. Thank You. It’s been an honour. 🙏🏽⚽️ pic.twitter.com/qsy4bZCLjT

“Today I am announcing my retirement from football,” Pienaar said. “I just want to say thanks to my mom and my family and all the clubs that I have played for and the supporters off course, how can I forget you”, he said. “Thanks for the love throughout my career. Follow my social media, there’s an announcement coming up soon and you guys will be the first to know.”

After beginning his career with Ajax Cape Town and making the move to the original Ajax in Amsterdam, Pienaar began a nine-year stay at Everton after a year at Borussia Dortmund and sandwiched with a move to Tottenham. The 35-year-old made 210 appearances for the club and also made more than 60 appearances for the Bafana Bafana, South Africa’s National Team, including representing them at the 2002 World Cup and on home soil at the 2010 World Cup.

Pienaar also played last season for Sunderland, though he was unable to keep them from avoiding relegation.

Former clubs of Pienaar reached out with warm wishes on social media on his retirement from playing.

🇿🇦 | Congratulations on a superb career, @therealstevenpi – and thank you for your service in the royal blue.

Best of luck in retirement. We hope to see you at Goodison soon! #EFC https://t.co/bMQhl05JZz

Best of luck in retirement, @therealstevenpi! 😘

Having started your professional career with the #UrbanWarriors – it makes us very proud to call you one of our own. You are a true inspiration to Our Youth.

Shocking defending put Crystal Palace down 2-0, and a valiant comeback was betrayed by that same defense in a 3-2 loss to Burnley at Turf Moor on Saturday.

Connor Wickham and Christian Benteke had leveled things for the visitors, but a 94th minute counter attack had Palace at the proverbial sixes and sevens as Ashley Barnes pushed a winner past Steve Mandanda.

Sam Vokes and Johann Berg Gudmundsson scored the opening goals for Burnley, who rise to ninth in the table with 14 points. Palace sinks 15th, with 11 points.

Palace’s defense was all over the place on the opening goal. Despite a cross hit too far and a less-than-ideal hit at goal, Vokes was able to bundle in the opener to make it 1-0 in the second minute.

And, oh, Steve Mandanda. After a strong save by Tom Heaton at the other end, Burnley’s Vokes slipped Gudmundsson in on goal. Mandanda’s parry of the Burnley man’s rip bounced into the net.

3 – Sam Vokes has bagged three goals in his last four league games, as many as he managed in his previous 14. Form.

Palace pulled within a goal when substitute Wickham took Wilfried Zaha‘s cross with style to make it 2-1. And Benteke finished a penalty kick opportunity to make honors even before Barnes’ surprising late goal.

We’ve got a pair of nifty tricks for you to evaluate this Wednesday evening, as Arsenal and Everton players square off on video.

Steven Pienaar and Chuba Akpom are your contenders in this “Whose move was more impressive?” stand-off.

First, we have Everton’s Steven Pienaar, who was goofing off ahead of a Toffees’ post-season event and successfully used the back of his head in a juggling episode.

Then there’s Chuba Akpom of Arsenal, on duty for England with the U-20s. While his nation fell to Mexico in this match at the Toulon Tournament, Akpom pulled off this spinning nutmeg and collected the ball on the other side.

Which one do you like more? Akpom is the easy answer given it occurred during a match, but might Pienaar’s actually be more impressive?

Manchester United looks set to lock up a return to the Champions League, as a win at Goodison today could simultaneously put them a whopping 10 points above Liverpool in fifth place while also vaulting them above Manchester City and Arsenal into second place.

Meanwhile, their opponents have been in good form as well. The Toffees have rattled off five unbeaten, including four wins over that span, and look poised to finish a somewhat disappointing season on a high note. Everton sits in 12th position, but a win could put them level with West Ham on points for 10th.

Daley Blind returns to the field for the Red Devils after missing out with a slight ankle problem, but the defense is slightly beaten up with Phil Jones and Marcus Rojo both on the sidelines. That leaves young Paddy McNair to spot start yet again in central defense alongside Chris Smalling, something he did plenty of early in the season. Michael Carrick also will not play thanks to a calf injury.

Embodying the juxtoposition of last year’s failures against this season’s success, former Everton midfielder Marouane Fellaini starts on the return to his former club.

For the home side, Roberto Martinez is without Steven Pienaar thanks to injury while Leon Osman and James McCarthy are both ready to return from knocks and are in the starting lineup. Everton have scored exactly one goal in each of their last three games, but the defense has been stout and they’ve recorded seven points across that time. 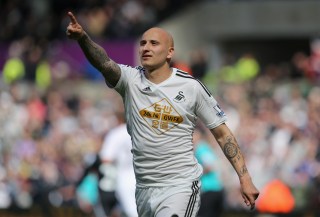 Roberto Martínez: It was the most satisfying victory of the season February 1, 2014 1:14 pm

Another Everton loan for Landon Donovan? They’re talking about it again November 29, 2013 7:57 pm